If you follow business software even just a little bit, you’ve probably heard about Slack, a team communication app that bears some resemblance to chat rooms and Internet Relay Chat (IRC) clients. People have been signing up for Slack to chat with their colleagues — and sometimes also friends — astonishingly quickly since the app launched in February 2014.

Last month Slack said it had 750,000 daily active users. That includes Slack’s biggest deployment, at the New York Times, where there are 2,000 users on a single instance.

But Slack hasn’t done much to grow its user base; word-of-mouth buzz has done far more to make it part of the current cultural zeitgeist. The San Francisco-based company has released hardly any “content marketing” that provides information on Slack’s capabilities and benefits in the workplace.

“We’ve just done a shitty job of telling people how to use Slack,” Cal Henderson, a cofounder of Slack and its chief technology officer, told VentureBeat in an interview this week.

Henderson thinks that can change.

“Slack.com more or less hasn’t changed since the day we launched. You can visit the homepage of Slack and it won’t tell you what it is. That’s something we definitely need to work on, and we’ll be releasing some more stuff for that real soon.”

You’d think that explaining and demonstrating a product would be a high priority for a company that is competing against the likes of Atlassian, Microsoft, Salesforce, VMware, and an expanding group of companies offering Slack-like functionality.

But engineering has historically been a higher priority at Slack, with several updates coming to the app each month.

As a result, Slack HQ looks like more of a nerd lair than an enterprise sales powerhouse, with conference rooms named after emoji, and blocks of seats in the shape of a giant hashtag in the lobby. 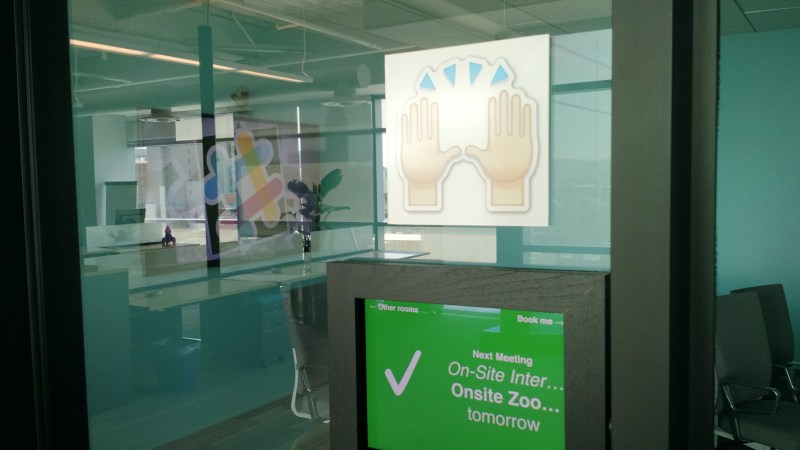 Above: The :raised_hands: emoji room at Slack HQ

If you ask Slack’s chief marketing officer, Bill Macaitis — the first marketing hire, having come onboard in December — about the business, he’ll tell you about wanting to please users, not out-marketing other vendors.

“A lot of companies out there are competitor-centric,” Macaitis told VentureBeat. Slack, by comparison, is “a customer-centric company,” he said. For example, features only get shipped when they’re going to perform perfectly — they don’t get released in response to updates to another team communication tool, or on a certain arbitrary date.

With that said, Macaitis is hiring. His marketing team will have a staff of 20 by the end of the year. (Currently Slack employs around 140 people, so even with the additions, the marketing organization will not be the biggest one inside the company.) And as they will be working to better inform the public — with advertisements in different formats, as well as customer case studies and other marketing materials — the public should start to understand the product better.

“It’s embarrassing that the best tips are on third-party publications,” said Henderson. “We’re so bad at describing what Slack does that everybody else needs to do it for us.”

But hey, at least Slack’s business cards explain the purpose of the company at a high level. 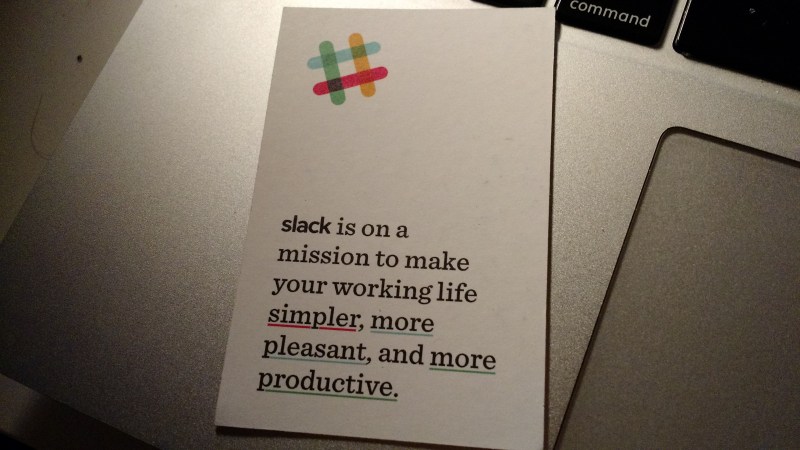