Hazzikostas: The Adventure Guide [in World of Warcraft] is designed to look at your item level, achievements, quests, things that you as a character have completed so far, as well as other things that are going on in the world. Like, hey, is it Draenor bonus dungeon weekend right now? You should go run some dungeons and you’ll get extra rewards for doing that.

It uses that to recommend activities for you and also serve as a landing page. Sometimes you can auto-accept quests by clicking a button in the Adventure Guide. Or it’ll take you right to the Group Finder to search for a group for a given activity.

If you’re logging into World of Warcraft wondering “What should I do today that’s relevant to my character,” this should give you a nice array of options. 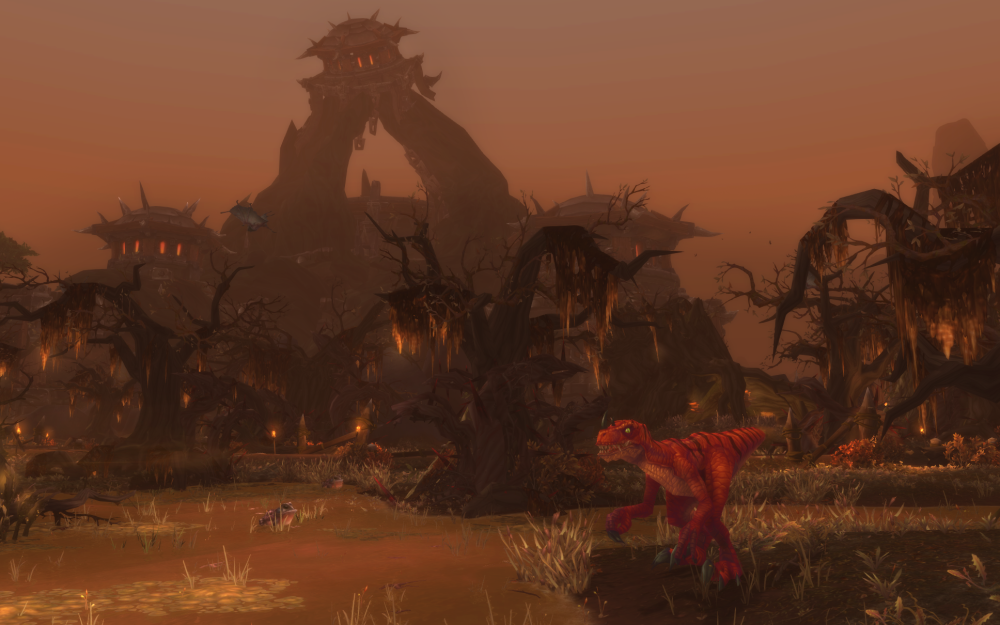 Above: Tanaan Jungle’s Zorammarsh area. It’s a nice place to visit, but … wait, no it’s not.

GamesBeat: How do you determine how much content to add in a patch?

Hazzikostas: Our player base is voracious when it comes to content, and it’s impossible to ever make enough.

We’re always striving to balance between satisfying those who are our most hardcore consumers of content, without overwhelming people who are taking things at a slower pace. And also, of course, allowing us to focus on future projects that are really important.

Ultimately we try to reserve certain types of changes for expansions as opposed to patches. It helps to keep a little of that complexity in check.

What patch 6.2 represents is iterations on our existing systems, polishing things using lessons learned from 6.0, adding new content in that model. But we’ve backed away from doing things like massive class overhauls in a content patch. It can be actually quite jarring for someone who has taken a short break from the game to come back a few months later and finds their rotation is massively different than it was when last they left.

Hazzikostas: Overall, it hasn’t been a drastic change in any way, which is great. It’s what we’ve hoped for. There’s no overnight change now that tokens are out there. There’s just some more options and some more flexibility. 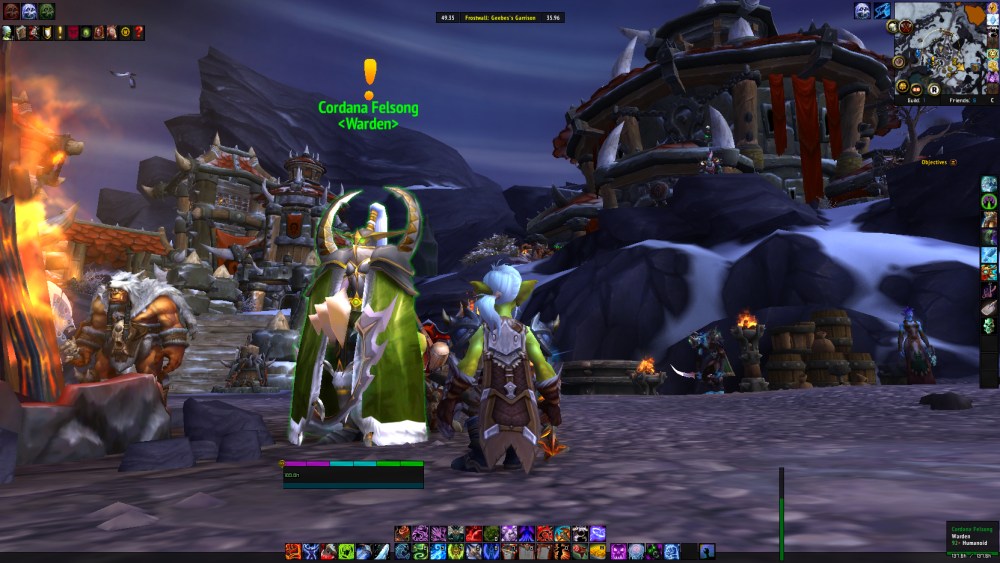 Above: Exclamation points over quest-givers’ heads: one of WoW’s first accessible innovations in the MMO genre.

GamesBeat: From the day it launched, WoW eclipsed the number of subscribers of other pay-to-play MMOs. What was it about the game that let it jump ahead of earlier MMOs?

Hazzikostas: From the start, accessibility has been a core value of the game. That was one of the things that differentiated it from something like Everquest that came before.

What accessibility has meant to us and the players has changed over time, but ultimately it meant something that attracts a broader audience and offers new and different ways, many ways, to experience the content, explore the world, play the game, and feel like you’re a part of Warcraft.

It was actually revolutionary in 2004 that you could actually play solo and still make your way all the way to max level. You were never put in a position where the right thing to do was mindlessly kill the same creatures over and over again. You had a questing structure that at the time was unheard of, that guided you all the way from level 1 to max level.

At that point, WoW was defined as the most accessible, welcoming MMO in the genre as a whole. We have striven to continue to live up to that value, and to extend what it means and provide as many ways as possible for players to enjoy the game over the years.

GamesBeat: How do you balance that accessibility and keeping the game challenging for experienced or hardcore players? Gamers often complain about World of Warcraft being “dumbed down.”

Hazzikostas: Our classes are probably far more complex than they were back in the day, I think, without exception.

If you look at the so called hardcore-raiding heyday of late Burning Crusade, one of the top classes was the warlock with a destruction spec, who would literally just press shadowbolt all fight long. Literally the rotation was you would keep up this one debuff and then you’d push the 2 key, really hard and really quickly, and you’d beat everybody else.

The game has not in any way been dumbed down from that. A lot of the rest is just about trimming excess and keeping things focused and concentrated. There’s a very high skill cap in the game. 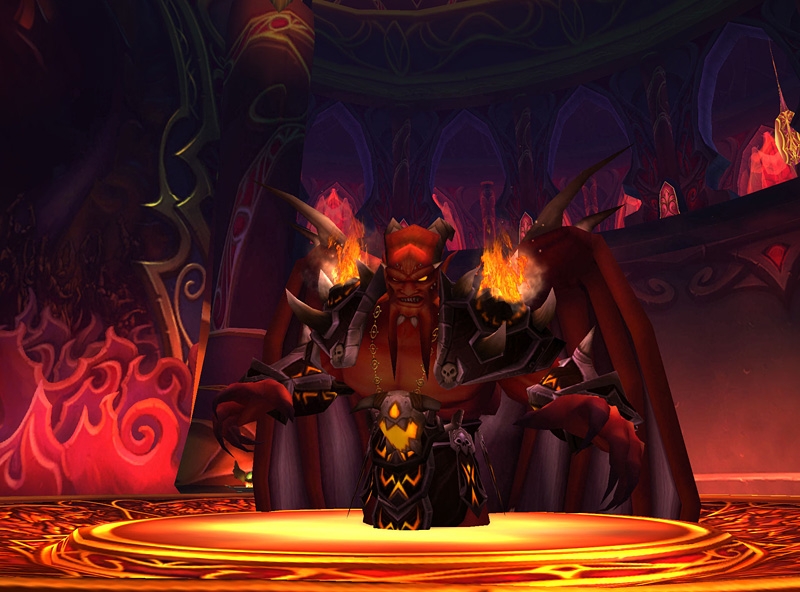 Above: Warlocks were the bane of the Sunwell Plateau large-group raid dungeon’s final boss, Kil’jaeden.

GamesBeat: So what do you mean by accessibility, then?

Hazzikostas: When we talk about accessibility, it’s not accurate always to say that that’s a value for new players joining the game. It’s also just as much, if not more so, for players who have been playing the game for a long time but want to continue to enjoy it in different ways or at different levels of commitment as their lives change.

That’s one of the more unique challenges that we deal with a game as long-lived as World of Warcraft has been. Millions of players have been playing with us since the early days. They started out as students but are now professionals with families, who used to relish nothing more than a hardcore raiding session with their friends, but who are now just trying to sneak in 45 minutes of gameplay after the kids have gone to bed.

They still want to live in the world; they still want to experience it. In that world, accessibility means more bite-sized chunks of content. If you want to devote hours at a time, there are outlets to do that. But it’s not required in any way.

It’s people who still have that competitive ethos. They’re hardcore at heart and they want to be the best at something. But at the same time, they realize they only have finite amounts of time. They value their time very highly. They’re all about efficiency.

They compete with other guilds that are raiding those same hours. That’s something that wasn’t very possible or even heard of back in the day. 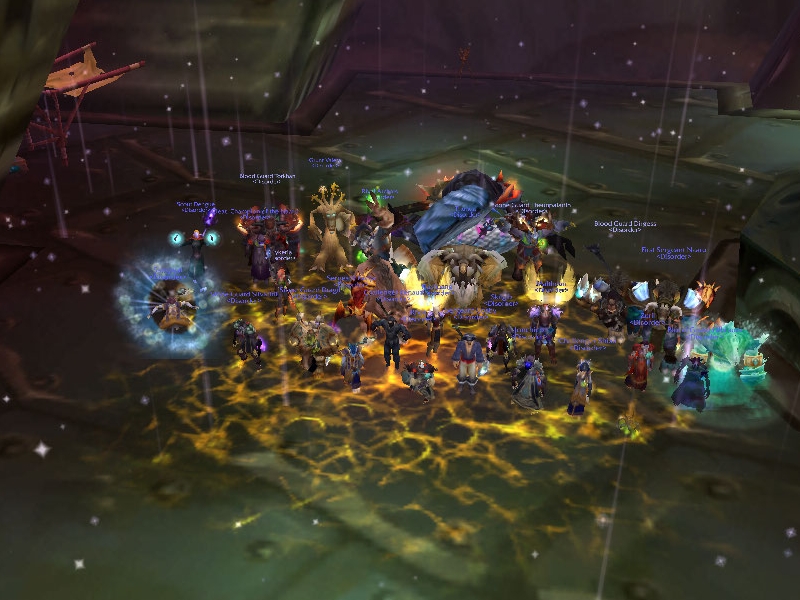 Above: A guild defeats Fathom Lord Karathress in Serpentshrine Caverns, a Burning Crusade expansion raid dungeon — by playing a lot more than six hours a week.

GamesBeat: Speaking of Mythic difficulty raids, are you happy with the transition between Heroic-level raids, which are flexible in size, and the hard 20-person requirement of Mythic contests? Many player guilds are breaking apart on those rocky shores.

Hazzikostas: It’s definitely a challenge. I wish there were a way to make flexible raiding work for all difficulties including Mythic.

I genuinely don’t know that we have the ability to tune it the way we need to be roughly equal for 15 players or 24 players or 12 players. It ties our hands with respect to how encounters can play out in Mythic.

We have the freedom right now to say we want to make an encounter require three tanks. That’s much harder to do in a world where maybe you only have 10 people in the raid. Three tanks is kind of unreasonable at that point.

Or requiring a specific class — like you need to have a priest to mind control to do Blast Furnace [a Warlords raid boss] on Mythic difficulty. You could do that with 10 people, but we wouldn’t feel comfortable saying in a game with 11 classes you must have this one class in your 10-player raid.

There is room to use that structure as guilds are approaching that threshold, to do recruitment to build up to that. No Mythic guild has a roster of exactly 20 people, or at least no long-lived stable one does. You always want some slush so someone can take a night off, or someone has something come up and you’re not canceling your raid.

Heroic being flexible allows you to try out recruits, to have a larger roster, and still have everyone involved a lot of the time as you’re getting ready and gearing up to jump into Mythic. 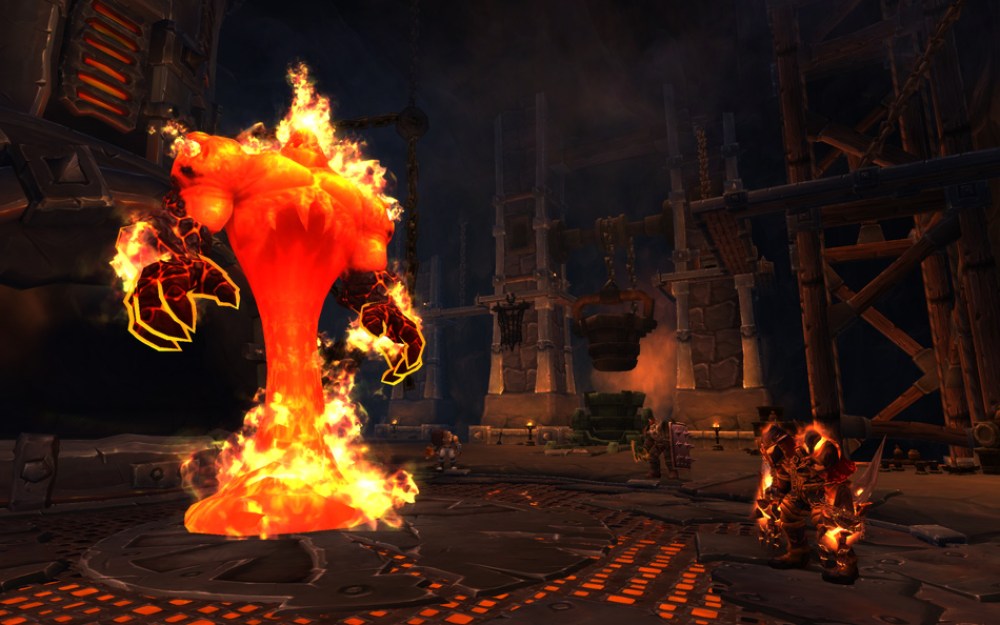 Above: The Heart of the Mountain in the Blast Furnace, the boss that guarantees priests a spot in Mythic-difficulty raids for Blackrock Foundry. Lucky jerks.