GamesBeat: So how do you balance the needs of Mythic-difficulty raiders in World of Warcraft with more-casual gamers?

Ion “Watcher” Hazzikostas: In various spheres of the game, we’ve been able to cater to those groups separately. In reality, their desires and interests aren’t in conflict as much as it might seem.

For something like raiding, certainly there’s a different level required to interest and engage the hardcore raider who’s been playing with their guild for years and years and still wants to spend 15-plus hours a week learning the hardest raid encounters in the world. We have Mythic difficulty for them.

On the flip side, if you still want an organized raiding experience, but you’re doing it in a friends and family group that literally are relatives and coworkers and you’re never going to kick anyone out or recruit anyone based on performance, but you just kind of want to have some fun and maybe pop open a couple of beers and joke on voice chat as you raid, well, normal difficulty is great for that.

Seven years ago, if you wanted to experience the storyline of Burning Crusade to its conclusion and you wanted to see [the villain] Illidan, you had to be in this top couple-percent super hardcore. Now both groups can experience the content and still have satisfying experiences that are right for them.

GamesBeat: How has the MMO audience changed since World of Warcraft launched? What are people looking for in an MMO now, versus when the game began?

Hazzikostas: It’s really hard to generalize. People are so different. Some of the people are young students discovering this cool world. In some cases, it’s varying time commitments or flexibility, being able to play the game on their own time without having to lock themselves into a specific schedule.

In a broader sense, one of the biggest changes in how people approach the genre as a whole is just this connected, social media, Internet world in which we live.

When I first started playing World of Warcraft as a player in 2004, it was kind of mind-blowing to me actually that I was getting on Ventrillo for the first time and I was talking to a guy from Texas in my group with a thick Texan accent; at the same time, I had someone who was also in New England who went to school not far away from where I had once lived, and we were chatting about that.

It was bizarre. I was like wow, I’m talking to people from across the country, and that’s a foreign experience to me. The current generation, it’s a given, whether it’s Xbox Live, whether it’s just social media, being on Twitter or being elsewhere. It’s a more interconnected world and the MMO genre itself doesn’t have that element of novelty to it.

But at the same time the types of gameplay and the kinds of things we can do are much richer and deeper. 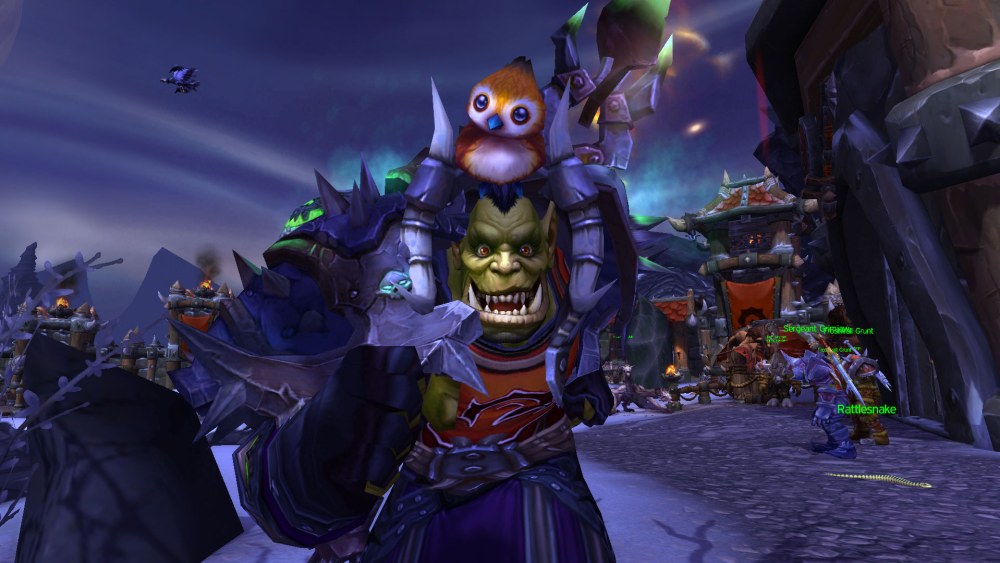 Above: And you get to meet fun people like this guy. Player Greg Christiansen (@monstein)’s Orc carries Pepe the garrison bird.

GamesBeat: Are social ties formed in-game one of the things that keep World of Warcraft subscriber numbers in the millions?

One of the things we are proudest of really, and nothing highlights this better than going to BlizzCon every year and seeing the people there, are the connections, the bonds that are formed as a direct result of the work we’ve done and the world we’ve created in the game we’ve made. People are lifelong friends because of WoW.

It’s an integral part of keeping the game an engaging experience.

One of the values that we have is trying to make WoW as social a place as possible. We recognize that over the years, some of the convenience features have eroded a little bit of that.

It was tremendously inconvenient to have to sit in town and spam trade chat looking for a tank for your group to go run a five-player dungeon for 90 minutes before you could do it. But when you found that person you were more likely to latch onto them and look for them again and depend on them and rely on them.

[Now] you press the Looking for Group button, and you’re 5-10 minutes later assigned to a random group. You have a better dungeon experience, but it’s harder to form those social bonds.

Things like the premade group finder that we’ve added in Warlords are an effort to recreate structures and environments where you could actually meet new people. [The group finder allows players to recruit others for help with everything from quests to PvP.] 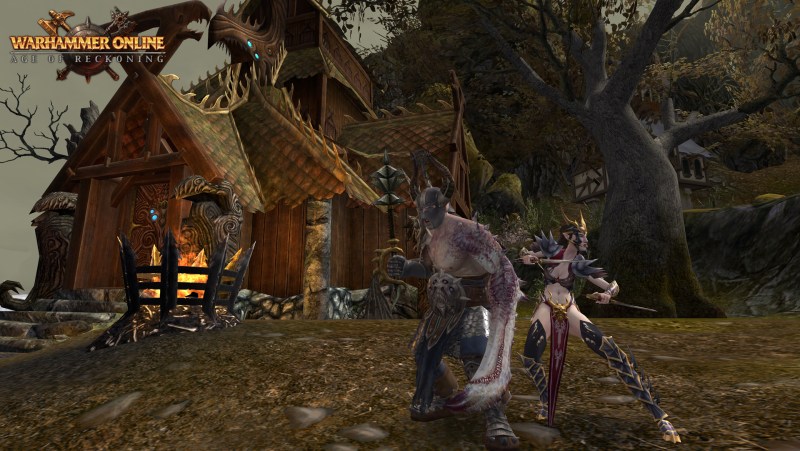 Above: World of Warcraft’s killers were supposed to include these folks. Remember them?

GamesBeat: So what’s kept the game going? The graveyard is full of games that were supposed to be WoW killers. Is there just not room for more than one big play-to-play MMO?

Hazzikostas: I wish I knew exactly what the magic was — we’d just capture it in a bottle and duplicate it and we’d all be in wonderful shape.

It came along at a time when the genre was ready to explode. It provided a world where people could make all these bonds and connections and friendships in. It captured a place in people’s hearts that brings them back to the world to check out the next thing we have.

I think the other main thing that I attribute our longevity and strength to is just our adaptability, and the ways in which we’ve changed as a game. I think in so many ways, World of Warcraft has probably changed more than almost any other game I can think of.

We’ve viewed other MMOs much less as competitors than as inspirations. We’re all huge fans of the genre. Most of us play every MMO that’s out there. We’re always geeking out over all of them, and thinking about, what are some things here that could make our game better? That’s meant evolution over time, as well as driving the genre forward in new ways that are meaningful to us.