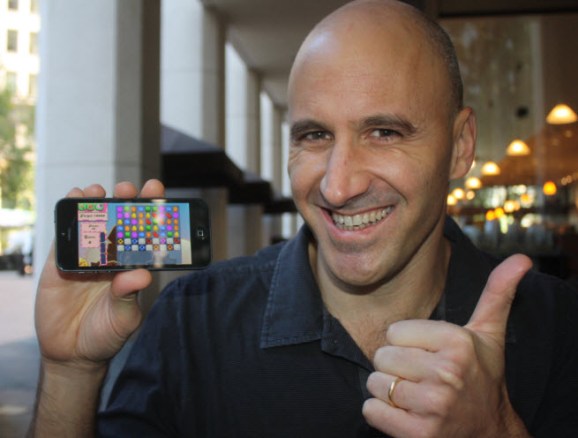 King chief executive Riccardo Zacconi said in an interview with GamesBeat today that the company is keeping busy developing more games than ever before. These include games in the traditional casual genre that King has dominated with Candy Crush Saga and its other Saga offerings. But they also include new ground that King hasn’t covered before.

“We have the biggest pipeline we have ever had,” he said. “Our leadership in casual is our first priority. We are focused on those four existing franchises. We have games in the pipe for all the franchises. We are also focused new sub-genres in casual like AlphaBetty, a word game. We take our proven approach of games that are running well on our website and launching them on mobile. We are also adding new categories of games. We announced we are doing resource management and midcore.”

King has expanded its headcount from 1,200 in the previous quarter to more than 1,400 now, largely due to the acquisition of mobile game maker Z2Live in Seattle.

Zacconi noted that Z2Live is working on the resource-management game Paradise Bay. He said the game pays a lot of attention to details, it has a beautiful 3D graphics engine, and “they are putting a lot of love in the game,” he said. There’s also a market where you can exchange goods with other players.

But it’s going to face competition. Pocket Gems launched its Tap Paradise Cove game back in 2012. That game looks remarkably similar, and critics are sure to say that the King game is a copycat.

Not everything is as sunny as Candy Crush Saga scenery. King scaled back its expectations in a big way for the second quarter, mainly because the new games will be ramping up slowly. So King is definitely going to feel pressure from Wall Street even further beyond its usual games.

Analyst Michael Pachter of Wedbush Securities was expecting Q2 bookings guidance of roughly $545 million to 570 million. But King said that its gross bookings would likely be $490 million to $520 million. That caution spooked investors, and King’s stock price fell 9 percent in after-hours trading.

King’s chief financial officer Hope Cochran said in an interview that the number of payers dropped in the first quarter compared to a year ago because of a change in the way that King handles its payers. It changed from buying individual items last year to buying bundles of goods. So there’s a change in the payment patterns, Cochran said. While payers dropped from a year ago, the number of payers were slightly up in Q1 compared to Q4.

“We were pleased with Q1. It was a nice strong quarter beating guidance and record numbers with metrics like 550 million monthly active users, 1.6 billion game plays a day, tremendous amount of profit with $250 million EBITDA, but as we looked at Q2, we are looking at things we see in the business,” she said.

People are playing fewer games on Facebook on desktop, and that part of the business is declining. More games are also coming out after Q2. And there was also a big change in foreign currency exchange rates, and that has a drag on revenue.