Crowdsourced wireless coverage startup OpenSignal has launched a new app that shows you all the free Wi-Fi hotspots in your locale.

With Wifimapper, the London-based startup is taking its swath of existing data and pushing it into a new standalone app for iPhone. This could save millions of people mobile data charges by helping them tap into all the cafes, pubs, and other public places that offer Internet access gratis.

Founded out of London in 2010, OpenSignal has built a solid reputation for its technology that monitors the speed and network coverage of mobile networks. With millions of installs on Android and iPhone, OpenSignal’s eponymous app tracks users’ mobile phone coverage (strength of signal, and so on) and makes the information available to anyone. The crowdsourced data offers an independent view of what the various networks offer, rather than believing what the carriers themselves say.

OpenSignal makes money by selling data to mobile networks, as carriers often like to have another view of their network’s performance.

More than that, OpenSignal also tracks when a user is connected to Wi-Fi, and offers a handful of in-app tools that let you test your speed and also see where public Wi-Fi networks are nearby. This “passive crowdsourcing” has been a key component of OpenSignal’s success to date, where all that’s needed is the installation of an app, with no active input required from the user.

But the company is now looking to engage its global community by asking them to manually “tag” Wi-Fi hotspots as “free.”

Getting a sufficient number of people to actively contribute to the free Wi-Fi database could be a tricky ask. However, OpenSignal has been smart with its approach here, by including a large number of locations it already believes are free.

Using data from the main OpenSignal app, it has developed an algorithm that guesses whether a Wi-Fi connection is likely to be free or not. It does this using data such as the number of OpenSignal users who have connected to it, while it can also match its data with Foursquare locations (such as cafes). 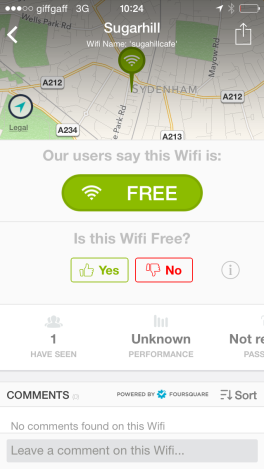 As such, there are currently two million hotspots globally that are deemed “likely” to offer free Wi-Fi, out of the 500 million total hotspots around the world. The plan is to improve the recommended (“free”) hotspot count with the help of its users.

You can contribute to the database by flagging whether a hotspot is free or not. However, one nagging concern for me here is that to contribute, you must log in using your Facebook credentials — this will definitely deter many people from participating, including myself.

This is still a “version 1.0” product, though, and the reasons for requiring a login function is to add community features such as comments. And it’s a lot easier to use an existing login function such as Facebook than build a whole new back-end to facilitate it.

“We think that by making users log in, it is more likely to make the contributions reliable,” a company spokesperson tells VentureBeat. At any rate, Wifimapper is still completely usable without logging in — you just won’t be able to contribute.

While there are other similar services out there, such as WiFi Map for iPhone, given OpenSignal’s existing Wi-Fi hotspot data, it already has the building blocks for a significantly more extensive offering. 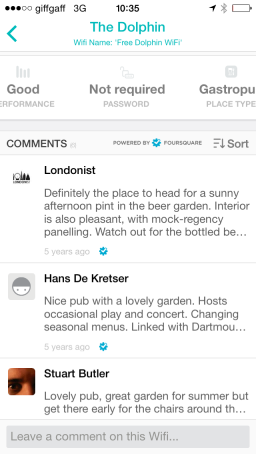 Above: Visitor Comments from Foursquare

Additionally, using data from Foursquare, Wifimapper shows comments from people who have visited the venue, so you can see whether the coffee’s nice or if it’s kid-friendly. And you can leave your own comments from within the Wifimapper app, though as noted already you must be logged in with Facebook.

Given the existing traction of the main OpenSignal app, which has garnered somewhere in the region of 10 million downloads to date, it would make sense to include Wi-Fi hotspot “tagging” within that app too, and remove the requirement to log in. This would surely drive active user input significantly.

“We are currently leaving them separate as adding the tagging functionality to OpenSignal would be a lot of work,” a spokesperson told us. “We definitely haven’t ruled out increased integration in future though.”

Wifimapper isn’t OpenSignal’s first standalone app. It already has WeatherSignal for Android and iOS, which uses a phone’s built-in sensors to create a crowdsourced network of weather forecasts using passively gathered data. The app is most functional on Android due to the range of sensors available.

Then there’s CrisisSignal, which is like a real-time version of OpenSignal designed for disasters and emergency situations. It was tested after Hurricane Sandy in 2012 to establish where networks were strongest, and was used to establish the best spots for setting up aid centers.

OpenSignal has always been an Android-first company with its apps, but Wifimapper is the first time the company has gone with iOS only for launch. This is largely due to practicalities — the company’s only Android developer is also the chief technology officer (CTO), so his time is divided across various duties. There is a beta version of Wifimapper available on Android, but there is no timeframe for launch yet.