GungHo’s Puzzle & Dragons is an international mobile hit, making more than a $1 billion in profits the last two years. This simple, low-cost match-3 puzzle game continues to make money for the Japanese company, and a spin-off for Nintendo’s portable game console will help continue that trend. But what makes this even more important is that this marks the first time Nintendo has licensed Mario to a mobile games company.

While it’ll never be as big as the mobile property, GungHo’s first go at portables was a success. The first non-mobile game, Puzzle & Dragons Z, was a hit in Japan, selling more than 1.5 million copies on the Nintendo 3DS. And a new Super Mario Bros. version tops currently Japan’s weekly sales charts.

To sweeten the deal for the series’ Western console debut, Nintendo combined both Puzzle & Dragons Z and Puzzle & Dragons: Super Mario Bros. Edition in one cartridge. That’s double the value, with no pesky timers or freemium pay prompts. 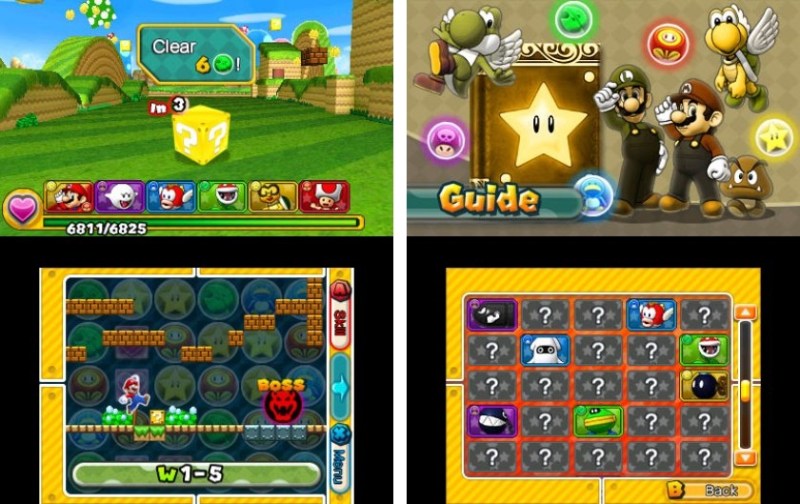 Above: They managed to fit Mario in this world, too.

The slide-and-drop match-3 action of Puzzle & Dragons is good enough on its own, but role-playing elements double up on the enjoyment for a unique two-layer experience. And you get two of them!

Matching any three orbs on the game board clears them, but the twist with Puzzle & Dragons is that you can move any one orb to any spot on the board during the allotted time. The goal is to have your single move set off a chain of other matches, which racks up a combo meter, which then sends damage counts flying. It’s simple, but it feels and looks complex, and it’s easy to get sucked in by the spectacle of hit points and crazy light effects.

The results of your matches are effectively your attack in an uncomplicated turn-based role-playing battle. The goal is to pull off combos to send damage to a row of enemies before they can attack you and wear your health bar down to nothing, which means the end of the game. It’s a lot like D3 Publisher’s Puzzle Quest (Xbox 360, PS3, PSP, PC) from a few years back, but refreshed and simplified for a new generation of mobile-minded gamers.

Several more complex role-playing elements add some depth to Puzzle & Dragons’ relatively simple hit-trading. Players are able to collect allies to create custom parties, allowing them to tailor teams for specific battle types, and the addition of power-up and transformation items further deepens the strategic possibilities. Beyond this, a surprisingly involved skill system lets players deploy abilities that can change the course of battle. Players have to put some work into making sure that only the best-equipped and prepped teams go into battle. It’s every bit as complex as any standard role-playing title.

Above: A selection of screenshots from Puzzle & Dragons Z.

Both Puzzle & Dragons Z and Puzzle & Dragons: Super Mario Bros. Edition share the same puzzle core, but they’re completely separate games beyond that. Each has more meat to it than the original mobile version, and neither feature microtransactions of any type.

While it’s becoming increasingly clear that it’s not hard to wrap a Mario-saves-Peach story around just about any game, the magic is in the execution, and this particular game does it well. In Puzzle & Dragons: Super Mario Bros. Edition you’ll travel around the Mushroom Kingdom via an overhead map to enter dungeons and take on your typical Mario game baddies — Koopa, Goomba, and others — in a hunt to find the princess. In a twist for the Mario franchise, you’ll recruit enemies after defeating them, allowing you to place them in your teams. Delightful remixes of Mario themes and familiar backdrops make this feel like something straight out of Nintendo, though GungHo handled development.

And if you’re the rare gamer that doesn’t like Mario and friends, a wholly separate game takes players through a classic role-playing game story as members of the Rangers of Zed City, out to fight thorough dungeons to take down evil enemy sky dragons. Its role-playing aspect is quite a bit more substantial than the Mario version. It features a main character, a full overworld, explorable towns, nonplayer character dialogue, and variety of dungeons. It features a full cast of characters, and the dialogue for them is sharp and witty. It’s on-par with the Pokémon series in terms of storytelling and production values.

While quite different, both games share good pacing and solid production values, though Puzzle & Dragons Z has a little more to offer those looking for a classic Japanese role-playing experience. Still, you get both, so everyone wins. 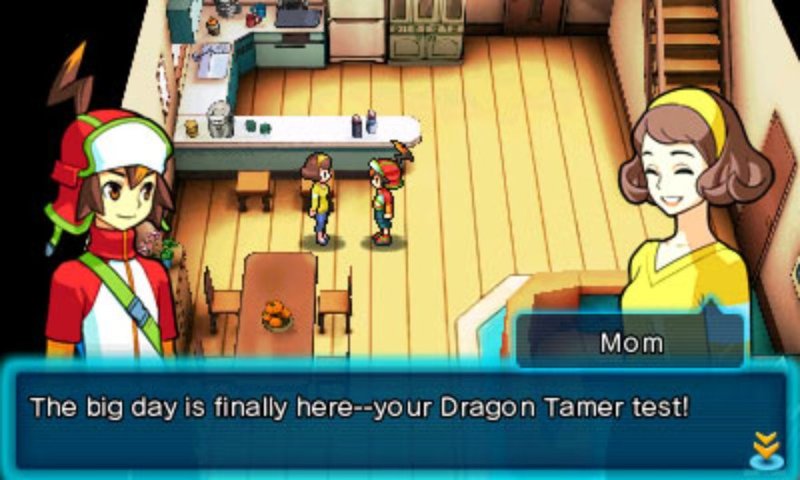 Above: Every good RPG starts out at home.

Too much at once

Puzzle & Dragons dumps too much of the gameplay particulars early on, leaving you to sort it out. While you’re still figuring out how the core puzzle gameplay works, it adds on team management, assist skills, and other role-playing elements in a constant string — and this happens across both games. None of these elements are particularly difficult on their own, but the combination can be a bit overwhelming.

Don’t let the cutesy cover fool you — both the original game and the Mario version feature a fair level of challenge. While GungHo did a good job of replacing some of the core elements of the free-to-play roots, there’s some grinding required to level up new party members to take on some of the surprisingly difficult bosses in both games. The Mario game in particular has some difficult end-stage bosses that can wipe out party members with a single shot. Thankfully, the puzzle action is fun enough that putting in the extra work isn’t that big of a problem

While it’s far from a cash-in, GungHo didn’t dip into Nintendo’s prop room enough Puzzle & Dragons: Super Mario Bros. Edition. It has a lack of variety in enemies and locales, and it doesn’t have enough Nintendo magic in the overall game. Even if it looks exactly like a Nintendo-made product would, it lacks charm at times. The original Puzzle & Dragons Z overflows with charm, but Nintendo 3DS owners are likely to expect it from the Mario-branded one. 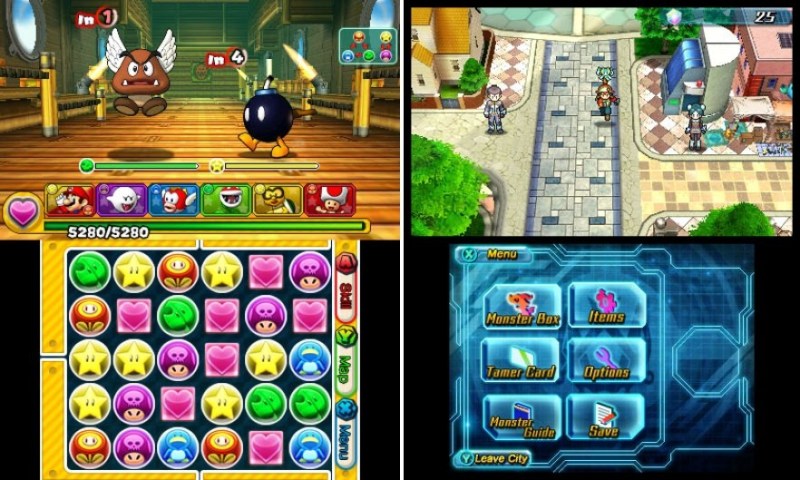 Above: The two games are more different than you’d think.

It’s rare to get two big games in one package, and even more rare portable games to come from the mobile world. Both Puzzle & Dragons Z and Puzzle & Dragons Super Mario Bros. Edition are more substantial than their mobile predecessor, and they’re unique enough to be considered wholly separate experiences. But the package has one key thing in common with the mobile title: addictive charm.