Heroes of the Storm has officially arrived! Blizzard Entertainment’s multiplayer online battle arena (MOBA) game has been in beta for many months, but on June 2 people everywhere can duke it out in the Nexus as their favorite Warcraft, StarCraft, and Diablo characters.

Heroes is more accessible than MOBA competitors League of Legends and Dota 2, but it can still be intimidating for a new player. So, we have some beginner’s tips to help you get started.

Above: Click on the Try button in Heroes of the Storm’s shop to test out a hero before you buy it.

Try out a hero before spending money/gold

Got your eye on World of Warcraft’s Malfurion but not sure you want to spend the 2,000 gold? Click on the “Try” button in the Heroes of the Storm shop before you click on “Buy.” That way, you can test the hero out in a single-player game and get a feel for its abilities and play style before you spend your hard-earned cash or in-game currency.

Start against the A.I.

In Versus A.I. mode, five players team up against computer-controlled bots instead of human opponents. This is where you should start your HotS career after finishing the tutorial. It’s a nice, low-stress way to level up new heroes, learn the various maps and their objectives, and practice your team fighting skills before moving on to quick matches.

Get each hero to level 5

Heroes of the Storm offers a rotation of free-to-play characters each week, and you should get all of them to level 5 along with the heroes you already own. Why? HotS uses a talent-gating system; each hero must be a minimum of level 4 to access all of their skills. So why gain the extra level? Reaching that milestone will award you 500 gold for each character. It’s easy money.

Heroes of the Storm features multiple maps — seven in total at launch — and each one has a specific set of objectives that can greatly benefit your team. For example, the Blackheart’s Bay map tasks you with collecting doubloons to pay a ghost pirate. After you’ve turned in enough coins, he’ll bombard the enemy team’s base with cannon fire. If the other team turns in enough coins, he’ll wreck your base instead. Objectives are an important part of every match, and a team that doesn’t work together to complete them will quickly find themselves in a losing situation. 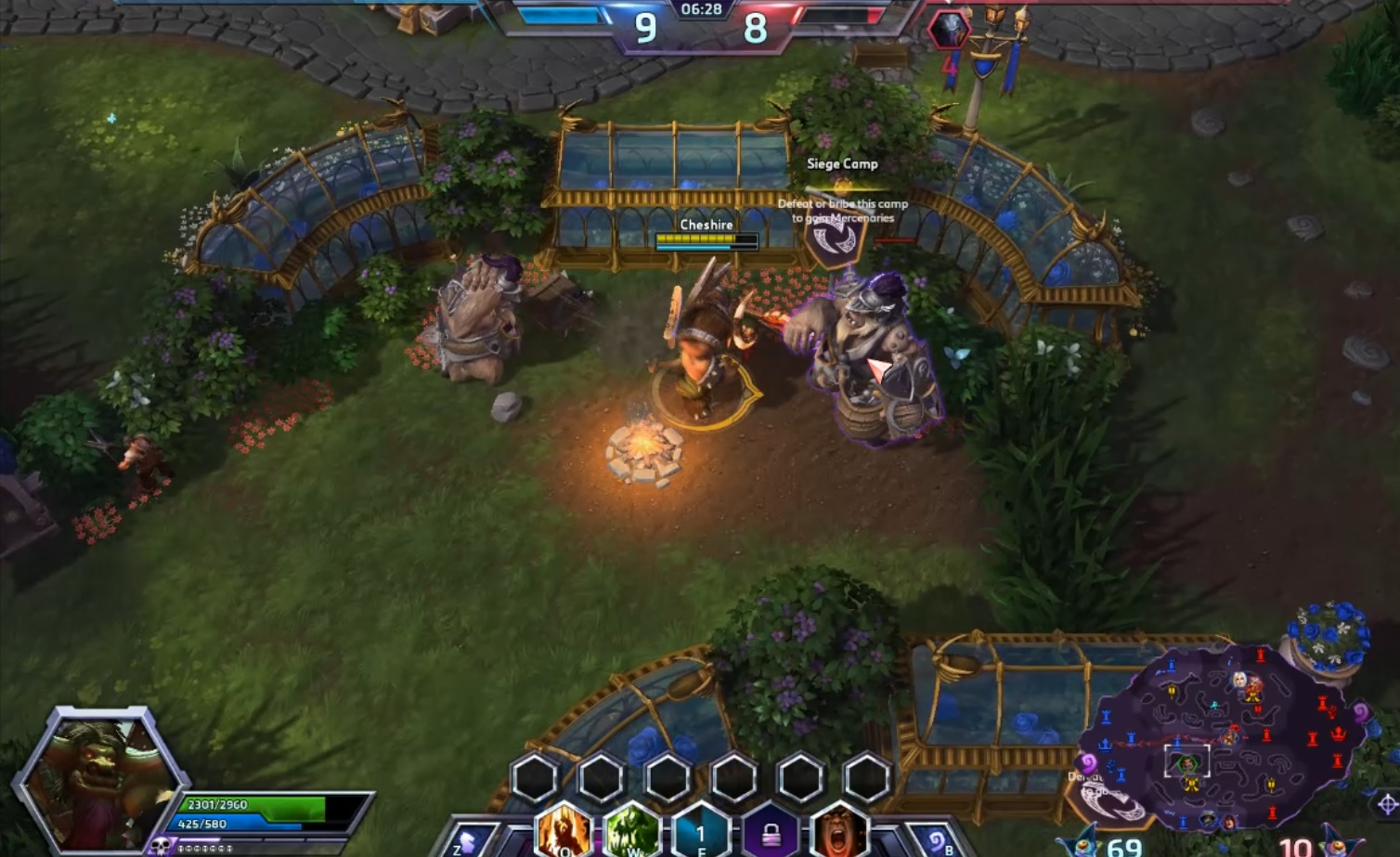 Above: World of Warcraft hero E.T.C. “convinces” a camp of siege giants to work with him.

The neutral mercenary camps dotted throughout each map are filled with useful minions you can recruit to your side during a match. They can help demolish towers and forts or provide a distraction in one lane while your team goes on the offense in another. The powerful boss mercs can even take down an enemy’s core by themselves if left unchecked.

If there’s a lull during the match and you’re not sure what to do next, try to quickly take a mercenary camp or two before the next team fight or objective. Keep in mind, though, that not all heroes are created equal when it comes to fighting mercenaries. Characters like the Zerg queen Zagara or the warrior Sonya can quickly tear through a camp without taking a lot of damage. Other heroes, like the sniper Nova, are terrible at it, and they should focus their energies elsewhere.

Map awareness is a good skill to have in every MOBA, and Heroes of the Storm is no exception. Are enemy mercenaries knocking down your towers? Is an objective about to spawn? Does one of your teammates need a hand in another lane? Is the opposing team setting up a surprise attack (also known as a “gank”) or are they taking down a powerful boss mercenary? A quick glance at the minimap can tell you all of that and more. Make a habit of checking it often to avoid some nasty surprises. 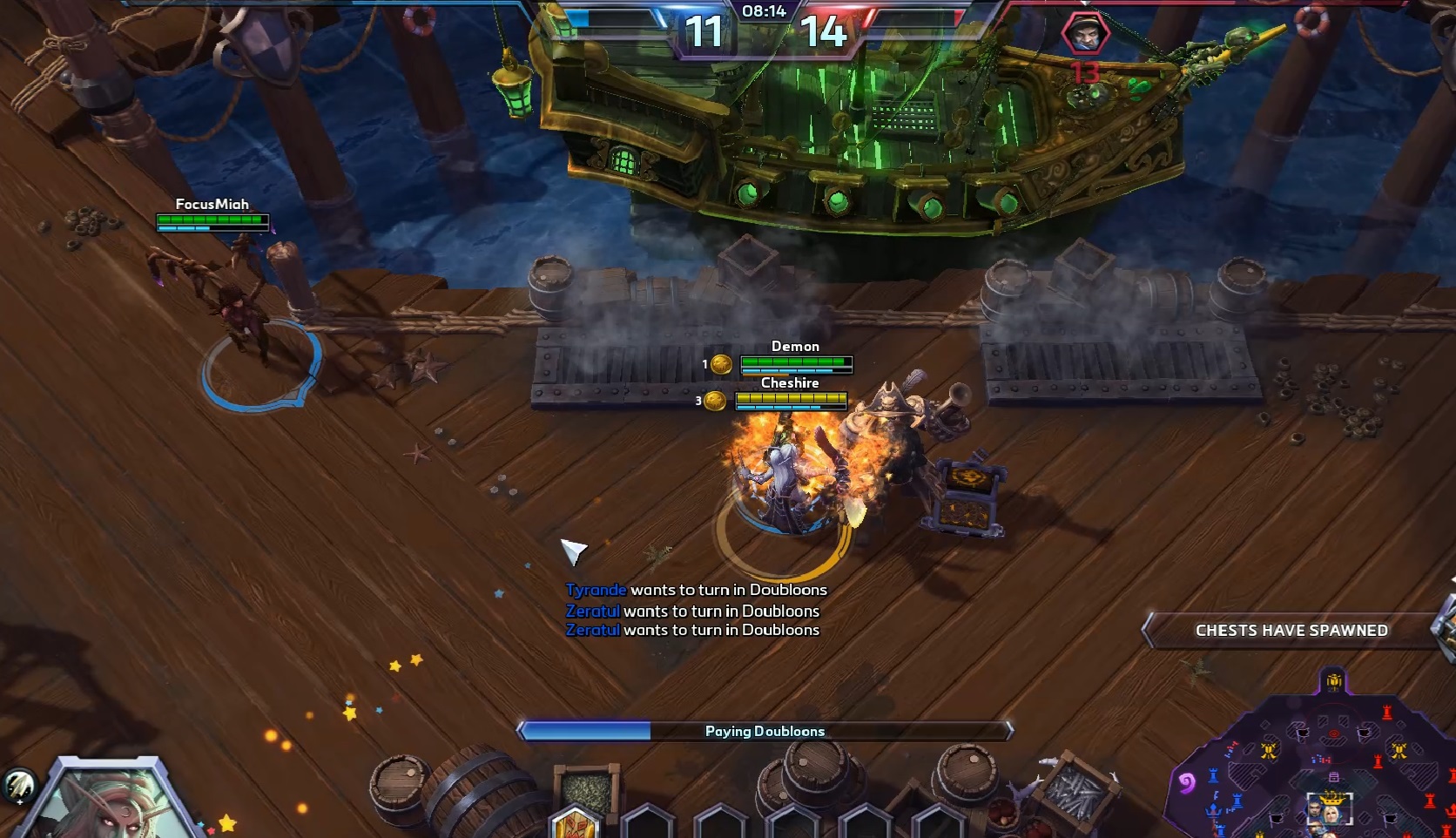 Above: Players hand over dubloons to an undead pirate in Heroes of the Storm’s Blackheart’s Bay map.

You can interrupt turn-ins and tributes

Let’s say you’re playing on the Cursed Hollow map and your enemies have beaten you to the tribute. Capturing it takes a few seconds. Use those few seconds to attack the player or toss out an area-of-effect (AOE) ability on the entire enemy team, and interrupt them. It’ll prevent them from nabbing the tribute, and it’ll give your team a chance to mount an offense and grab it themselves. This strategy also works on players turning in coins in Blackheart’s Bay and on those who try to take control of the Dragon Knight in Dragon Shire.

Communicate with your teammates …

There’s no voice chat in Heroes of the Storm, but that doesn’t mean you can’t communicate effectively with others. Hitting the Enter key enables you to type messages to your team, and only your team. So you can’t trash talk the competition. Sorry. You can also press G to ping the minimap and quickly alert others to things you think need attention. Like that Gazlowe that’s wrecking your fort by himself in the bottom lane. Just don’t be one of those guys that angrily pings the map a thousand times. Once or twice is enough.

… but mute them if you need to

Let’s face it — the Internet is full of assholes, and sometimes you just want to play in peace rather than listen to a salty teammate call you a “noob,” “idiot,” or worse for 20-plus minutes. Press the Tab key to bring up the scoreboard. On the right side of the screen is a series of chat bubbles — one for each player. Click on one to mute that player for the rest of the match. Enjoy the silence. 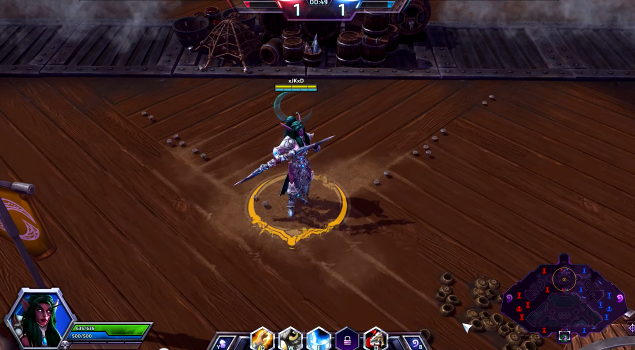 Above: Cloaked characters in Heroes of the Storm can be spotted by a shimmer effect as they move.

When fighting cloaked heroes, look for their telltale shimmer

StarCraft heroes Nova and Zeratul are permanently cloaked. But even when they’re invisible, they’re still kinda visible — if you know what to look for. They’re like the Predator; they’re perfectly concealed when standing still, but when they move, you can see a bit of shimmer on the screen. They can’t be targeted by abilities while stealthed, but a damaging AoE attack like Jaina’s Blizzard or Valla’s Multishot will reveal them. Additionally, Tyrande and Tassadar can use their Sentinel and Oracle abilities, respectively, to reveal cloaked characters in their vicinity.

Look, I get it. It’s an online game. It’s competitive. The game’s matchmaking gave you three assassins and a specialist, and your teammates aren’t performing to your expectations. You’re losing spectacularly, and it’s frustrating. But take a deep breath before typing out that angry screed and remember that everyone is playing to have a good time.

And please, don’t stand in the base and poutily refuse to play for 20 minutes, no matter how badly you’re losing. Nobody likes that. NOBODY.