Microsoft today announced that the Outlook smart filter Clutter will be turned on by default for Office 365 this June. More specifically, the switch will be flipped for tenants in the First Release program on June 1, while standard release tenants will have it turned on by default on June 15.

Clutter, which moves less important emails out of your inbox, started rolling out to Office 365 business customers in November. Here is how next month’s default change will affect existing users:

Clutter now moves over 1 million emails per day and saves users 82 minutes per month on average, Microsoft said. Once it’s turned on by default, however, those numbers will jump even higher.

Announced in March 2014 at the company’s Exchange Conference in Austin, Texas, Clutter is based on a simple idea: Microsoft wants to leverage the knowledge it gains about your daily work activities to automatically filter out emails that don’t immediately need your attention. Users can disable the feature through the options page in Outlook on the Web, Outlook 2016 Preview, or the link at the bottom of each notification.

Also announced today, Clutter’s inbox notifications are being replaced with alerts (maximum of one per day) and summary notifications (maximum once per week). The alerts are sent when new types of emails are moved to Clutter for the first time.

Here is the new alert notification in action: 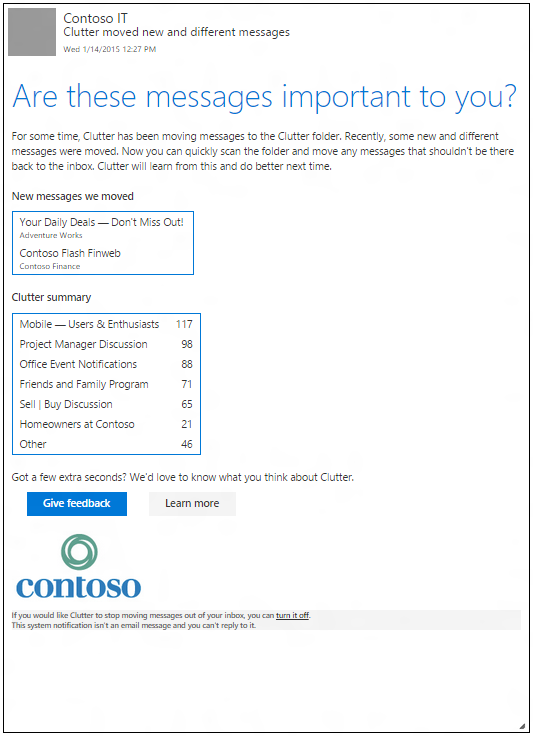 Last but not least, Microsoft unveiled new administrative controls for Clutter. Administrators can now configure a reply-to address for Clutter notifications, in addition to changing the sender display name.

There are also two new PowerShell cmdlets available today. The first lets administrators report on Clutter, and the second lets them turn it off before the June default change.

In related news, Microsoft also updated the Outlook Web App with a new feature for Office 365 customers. In short, you can now save attachments directly to OneDrive for Business: Clicking “Save to OneDrive” or “Save all to OneDrive” will add your files to a folder called Email attachments.