Firaxis Games developers said they wanted to make the ideas for the new expansion pack for Civilization: Beyond Earth all wet.

Civilization: Beyond Earth – Rising Tide will debut for Windows PCs this fall for $30. Published by 2K Games, the expansion to the space strategy game will feature new units and settlements for the watery landscape (and new graphics for how that water is displayed); a new diplomacy system; four new factions; hybrid affinities with their own units; an artifact system that gives players’ civilizations new powers; and two new biomes/landscape types.

GamesBeat chatted with David McDonough, co-lead designer for Civ: BE, and producer Andrew Frederiksen about the new expansion pack.

McDonough said the team landed on the idea of a watery expansion after thinking that perhaps Civ: BE could get a little weirder.

“We did a lot of trying to make the landscape look alien and feel alien,” he said. “Beyond that, it was still very much a Civ game in the way that you built cities, developed territory, and all that stuff. We were looking for a way to really differentiate it further, make it feel not just like a Civ game but a game about the future.

“Obviously we did a lot with the orbital layer, but we decided that the biggest untapped territory was the oceans on the new planet.”

It wasn’t enough to just plunk existing units on new blue hexes, though. They wanted it to look and feel significantly different than the existing game, the men said. So they revamped the graphics engine that displayed the water so you could now see through it, added shallow and deeper areas with their own characteristics, and even toyed with the beasts that live there.

“There’s one in particular that you’ll see in the near future,” Frederiksen teased, “that just kind of changes what you’d think of as an alien, and something you have to deal with as far as terrain or navigation around the oceans.” 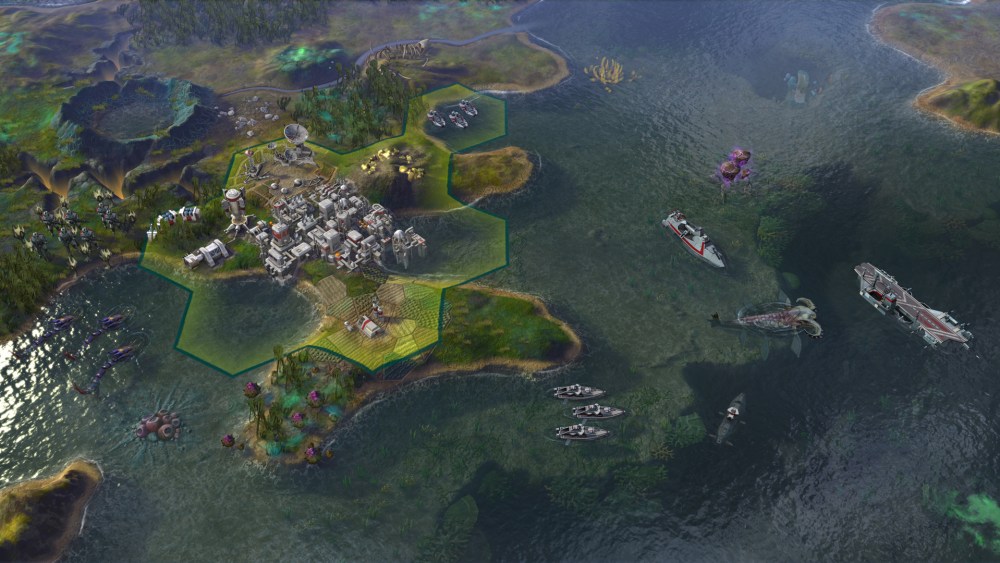 Above: Oooo, pretty. Until those things eat you.

How deep is your ocean?

The depth of the seas will affect what resources are present and how rare they are, he said. The waters will feature new units, new abilities, and new aliens.

“Some of the concerns may be that okay, krakens are pretty nasty creatures, you see those out in the water,” he said. “They still are. But we’ve expanded that catalog so you’re going to have to deal with navigating around these big guys as well as some newer guys in the ocean as well.”

McDonough said the new setup will affect strategy as well, especially as amphibious units make the transition smoothly from sea to land. Two new biomes will include Primoridal World, full of volcanoes (and, one assumes, water.)

“You can play an entire game on a completely water planet, or a totally aquatic civilization, and not be behind the power curve with a terrestrial competitor,” he said. “This came along with carrying a lot of the gameplay from land to sea but changing it in really key ways so that it was the same yet different, so there would be unique strategic challenges that would be appropriate to the water environment.” 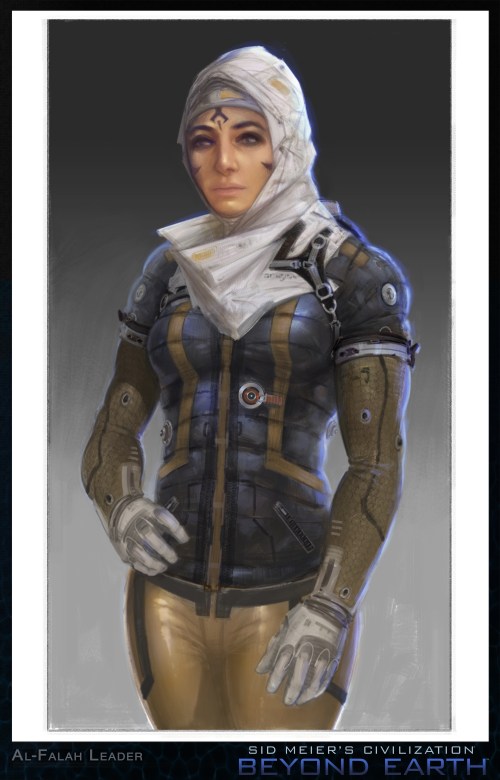 New factions add depth of their own

Rising Tide was also named after the new factions, McDonough said, and the tension they’re expected to bring. The expansion brings an overhaul for the diplomacy system, giving A.I. leaders much more personality — and the ability to change their minds. It also adds four factions, including one they’re announcing today: Al Falah, from the Middle East.

“They’re emblematic of the attitude for the new factions … a bit more radical, a bit more extreme than the original eight,” he said.

Al Falah represent the people who refused to be driven out of the Middle East by the ecological crisis that makes up part of the Civ: BE backstory.

“They fought through the crisis, they reclaimed their homeland,” he said. “And when they did go into space, it was as much an exercise of will as it was economic or technological power.”

One interesting note is that they never developed cryogenic abilities, making their space ships generational — meaning that the ones landing on your Civ: BE planet are manned by people who have never lived on a planet before.

“So as you can imagine, when they land on the new world, they’ve got pretty stark ideas of what a planet is and what it means to live there and what they’re there to do, which can raise the stakes and upset the balance of power for everybody else who’s got a more conventional perspective,” McDonough said.

The new factions will add new types of gameplay, he said.