China will take over as the top game market in the world this year, according to the upcoming 2015 Global Games Market Report by analyst firm Newzoo.

The company predicts $22.2 billion in sales this year in the Asian country, versus $22 billion in the United States. That gap will widen over the next three years, Newzoo chief executive Peter Warman said, with China ending at $32.8 billion and the more-stable U.S. games market at $24.1 billion. 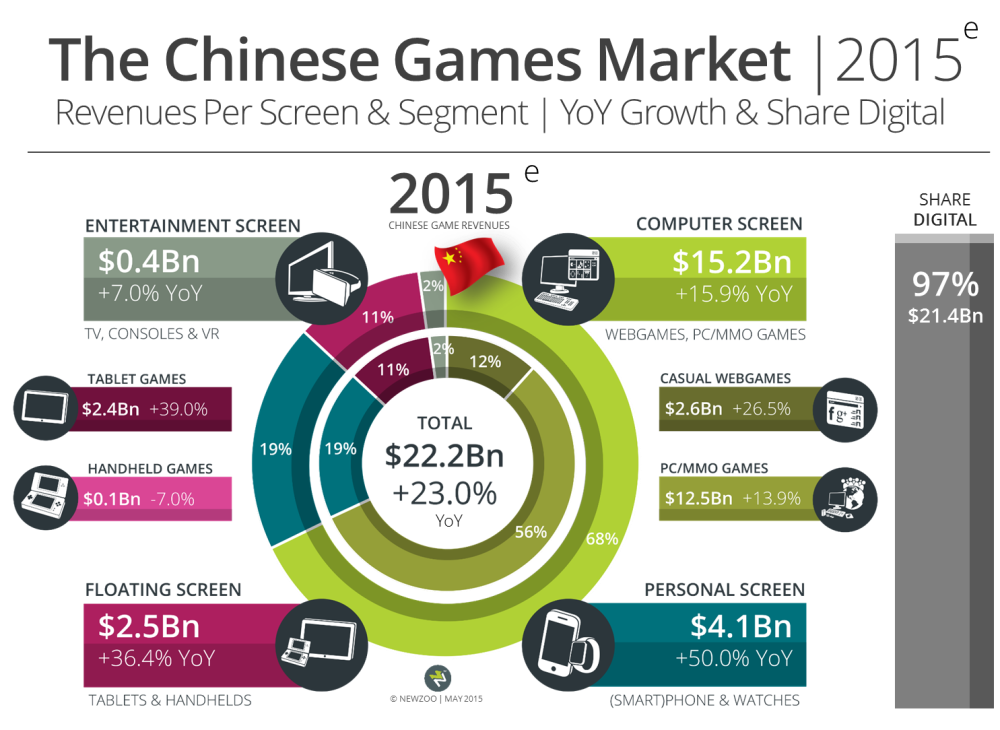 Above: The Chinese game market breakdown this year.

China will help drive which types of screens succeed

The change will make a significant shift in what percentage of the global market comes from different types of games, he said.

Because China’s mobile market is still exploding, that segment will help push the overall market percentage of “entertainment screens” — primarily gaming consoles — down to 24 percent globally by 2018 despite that the percentage in the U.S. is, and will remain, around 45 percent.

“Our theory, when we launched our Screen Segmentation [report breakdown] in 2012, was that time and money would divide itself across the four typical screens in an equal manner if every screen turns out to be equally important in a consumer’s life,” Warman said. “Things are moving exactly in this direction; only legacy [trends are] slowing this down.

“On the one hand, cultural legacy in the case of China, with no game tradition on TV because of smaller housing and lack of a console market. On the other hand, legacy in the West, particularly the U.S., where consoles have always dominated and the consoles are left as the only platform that successfully sells boxed products and the premium price upfront model leads.” 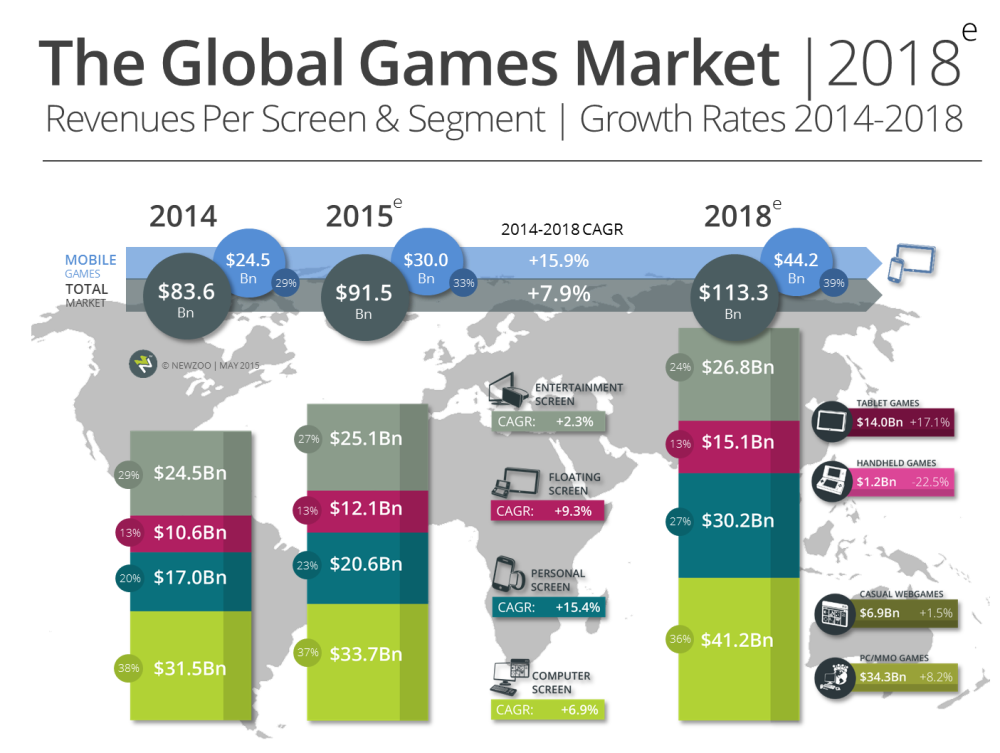 Warman expects this trend to change now that running games as a service has become the norm, he said. If the major console players continue to be closed systems tied to traditional retail agreements, he expects that change toward a pure-digital model will be slow, “giving challengers such as Nvidia’s Shield, Amazon’s Fire TV, and Valve’s ‘Steambox’ a chance.”

This year, 49 percent of the $9.9 billion U.S. console gaming market will come from digital sales, Warman said; 83 percent of the $4.2 billion PC and massively multiplayer sales in this country will occur online.

Combined, the two markets are 72 percent digital in the United States, compared to 97 percent in China. (Worldwide, that figure is 78 percent, or $70.9 billion.)

With digital marking the majority of sales, players are increasingly demanding to create content for and modify their favorite games, Warman said.

“In the coming years, successful game companies will be those that understand this broader disruptive consumer-driven trend and are able to distil and incorporate this into their games, services and business models,” he said.

Newzoo also expects e-sports to have an increasing impact on overall game sales, helping to push the games industry over the $200 billion mark within five years with hardware, digital media, event, and merchandising revenue. 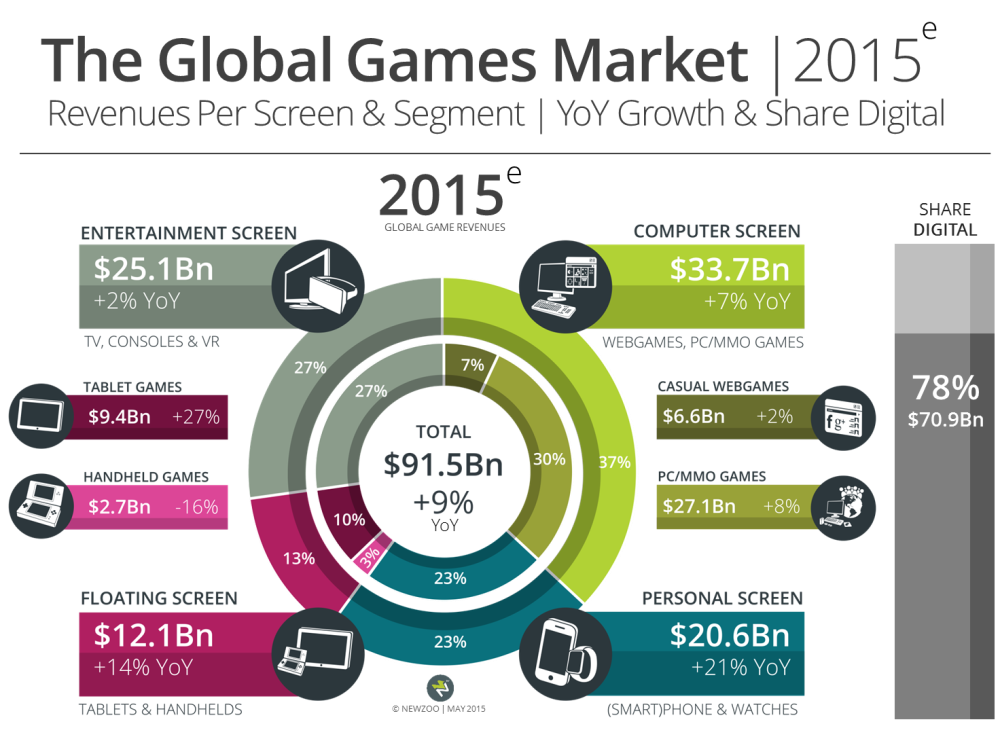 Above: The global game market by screen in 2015.

It’s notable that “entertainment screens” also include virtual reality headsets — but that they’re not expected to make much of a dent in the market before 2018, Warman said.

“It is very easy to overestimate the short-term revenue potential of VR products,” he said. “Facebook and other giants have invested in this for the very long-term. They cannot afford to miss the shift away from physical interaction with screens to augmented reality, which could take a generation to be adapted by a mass audience.”

The short term potential is limited, and even when it happens, it’s likely to cannibalize PC and console revenues, Warman said. Newzoo predicts VR could take 10 percent — about $3 billion — of the entertainment screen revenues by 2018, a figure that agrees with estimates by U.K. analyst KZero.

Neither VR nor smart gadgets like the Apple Watch (which Newzoo lumps into the “personal screen” segment with phones) will create new markets, Warman said.

“Both will largely tap into the budget game enthusiasts already spend on their favorite pastime,” he said. “Smart phones and tablets created new places and timeslots for people to play games. Smart watches and VR do not. Both will be successful [and] add significant hardware revenues, but let’s be realistic about how much new game revenues will be generated.” 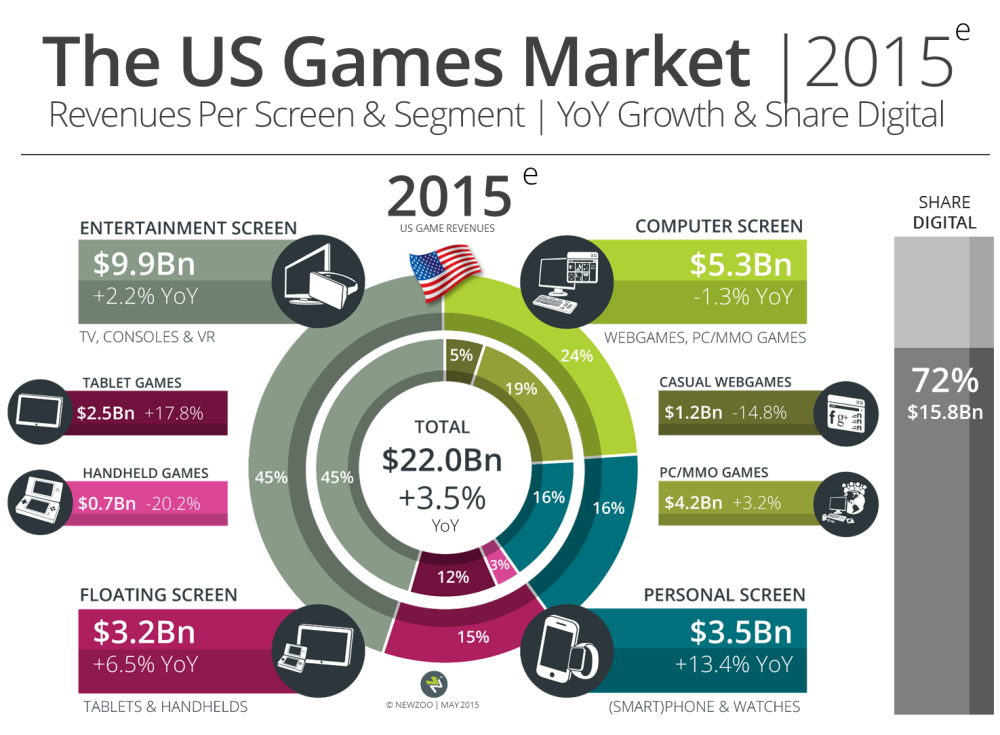 Above: How Newzoo expects the U.S. game market to break down this year.

Computers still rake in the revenues

What won’t change is how much PC gaming revenues affect the overall market, the Newzoo report said. The “computer screen” segment will account for 36 percent of the market by 2018, or about $41.2 billion, with a healthy compound annual growth rate of about 7 percent — roughly the same as the games industry as a whole.

That market will be mostly driven by PC and massively multiplayer games (multiplayer online battle arenas, or MOBAs, like League of Legends and MMO role-playing games like World of Warcraft), the report said.

Personal screens, which include smart phones and watches, will grow, reaching 27 percent market share in 2018, or about $30.2 billion. The final category, floating screens, includes tablets and handhelds such as the Nintendo 3DS and PlayStation Vita.

In that category, handheld-related sales are expected to drop by more than 22 percent by 2018, but tablet-related sales will rise by 17 percent, so the overall trend is flat.