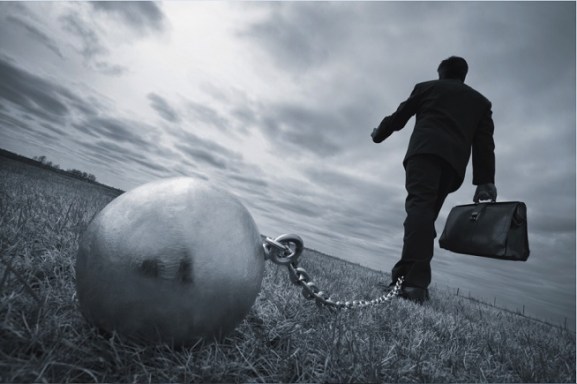 Startups focus on speed since they are burning cash every day as they search for product/market fit. But over time, code/hardware written/built to validate hypotheses and find early customers can become unwieldy, difficult to maintain, and incapable of scaling. These shortcuts add up and become what is called technical debt. And the size of the problem increases with the success of the company.

You fix technical debt by refactoring, going into the existing code and “cleaning it up” by restructuring it. This work adds no features visible to a user but makes the code stable and understandable.

While technical debt is an understood problem, it turns out startups also accrue another kind of debt – one that can kill the company even quicker – organizational debt. Organizational debt is all the people/culture compromises made to “just get it done” in the early stages of a startup.

Just when things should be going great, organizational debt can turn a growing company into a chaotic nightmare.

Growing companies need to understand how to recognize and “refactor” organizational debt.

I had lunch last week with Tom, the CEO of a startup that was quickly becoming a large company – last year’s revenue was $40 million, this year likely to be $80 million maybe even $100 million in ad revenue. They had reinvented a traditional print media category onto web and mobile devices for a new generation of users who were no longer buying magazines but reading online. Their content was topical, targeted, and refreshed daily. Equally important, their VP of marketing had brilliantly executed a stream of social media campaigns (Facebook likes and partnerships, email campaigns, etc.) to drive traffic to their site, which they then turned into ad revenue.

Tom was excited about their next big round of funding that valued them at almost half a billion dollars. He talked about how they were trying to maintain their exponential growth and told me how many people they were adding and the issues of scaling that rapidly. (They had doubled headcount from 100 to 200 in the last year and were planning to double again.) While he kept bringing the conversation back to their big valuation, I tried to steer the conversation back to how they were going to deal with:

His answer centered on the great location of the new building, what great furniture they were getting, and the compensation plans for the key members of the executive staff.

Since the meeting had been a courtesy to Phillipe, one of their VC board members, I grabbed coffee and asked him what scaling challenges he saw for the company. I was taken aback when I got a reply that sounded like VC buzzword bingo – phrases like, “They’re a platform not a product” and the ever popular “They’re a potential Unicorn.”

While the strategy sounded like a great long-term plan, I poked a bit and asked, “So what’s the training and onboarding plan for the new hires? What are you doing about the pay scales at the bottom of the organization? Aren’t you concerned about losing qualified people that the company spent the last few years training but never compensated adequately?” I got answers that sounded like Tom’s – new stock grants for the executive staff, great new building, and oh, by the way, Tom and his cofounder got to sell some stock in the new round. And let me tell you about the vision and strategy again.

As Phillipe kept talking, I listened, but not really, because I started realizing that while he was a genius in finding and nurturing great early-stage deals and had a vision that sounded great for the new investors, he didn’t have a clue about how to actually scale a company. He had never run one, and worse, had never been on a board of a startup making the transition from searching for a business model and product/market fit to the next phase of “building” the infrastructure to support scale.

While the company had a great plan for keeping the top executives and had all the startup perks like free food and dogs at work, they had spent little time thinking about the organizational debt accruing with the first 100 employees who had built the company underneath them. These were the employees that had the institutional knowledge and hard-earned skills. Originally they had been attracted by the lure of being part of a new media company that was disrupting the old and were working for low salaries with minimal stock. And while that had been enough to keep them focused on their jobs, the new funding round and onslaught of new employees at much higher salaries had them looking around and updating their resumes.

Surprisingly, given the tidal wave of new hires, formal training and job descriptions were still stuck in the early-stage “we’re too small to need that” mindset. The reality was that, with hundreds of new employees coming on board, the company desperately needed a formal onboarding process for new employees; first, to get them assimilated into the company culture and second, to train them how to do their specific jobs. Unfortunately, the people who could best train them were the underpaid employees who were now out looking for new jobs.

Organizational debt was coming due.

I had promised Tom the CEO we’d grab coffee again. When we did, I asked him about his head of HR and heard all about what great medical and insurance benefits, stock vesting, automated expense account forms, movie night, company picnics, etc., the company had. I offered that those were great for an early-stage company, but it was time to move to a new phase (and perhaps a new head of HR). Since Tom was an engineer, I explained the “organizational debt” metaphor. He got it instantly, and before I could even suggest it, he asked, “So how do I refactor organizational debt?”

I suggested that were seven things he could do – some quickly, some over time:

1. Put together a simple plan for managing this next wave of hiring. Tell each hiring manager:

2. Realize his expense plan is too low. I offered that it appeared he had put together an expense budget using current employee salaries. If so, he was in danger of losing the people he most cared about keeping. He should stop thinking about 10 percent raises and start thinking about what he’d have to pay to replace employees who hold critical knowledge and train new ones. It felt to me more like 50 percent raises in quite a few cases.

Some of the harder suggestions had to do with the organization as whole:

4. He needed to consider refactoring some of the original hires and their roles. Some employees don’t scale from “Search” to this new phase of “Build.” Some because they have performance problems or don’t fit a bigger organization, attitude etc. Some of these may be friends. Leaving them in the same role destroys a sense of what’s acceptable performance among new employees. This is hard.