Kickstarter may be the poster child of the burgeoning crowdfunding industry, but the platform’s limited global availability has hindered its wider adoption. This is starting to change, however.

While anyone anywhere in the world has always been able to “back” a project, only those located in a select handful of countries could create a project and seek backers. The U.K. was the first market outside the U.S. to open for Kickstarter projects in 2012, followed by Canada a year later, Australia and New Zealand shortly after, the Netherlands in early 2014, and then Denmark, Ireland, Norway, and Sweden five months later.

The New York-headquartered company has been quietly embracing new markets this month too, as France opened for Kickstarter creators on May 11, and German projects went live a day later. Yesterday, Spain was added to the Kickstarter mix, with projects expected to go live for backers on June 2. 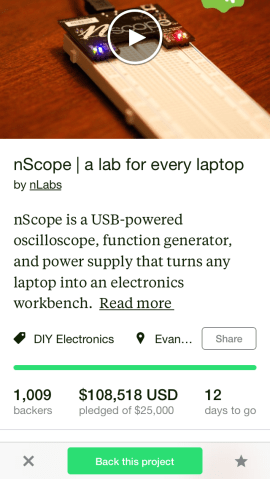 Since its inception in 2009, Kickstarter has seen almost $2 billion worth of cash pledges made by nearly 9 million people across 85,000 creative projects. While it has been an immensely successful conduit for funding all kinds of crazy projects — letting creators bypass bank loans, VC funding, and generous family members — it has really only scratched the surface of its potential.

A Kickstarter spokesperson confirmed to VentureBeat that more European launches will be coming “in the first half of 2015,” which basically means within the next six weeks. So in the space of two or three months, Kickstarter could effectively double the number of markets in which it was available back in April.

But why has Kickstarter adopted such a slow approach to new market launches? Can’t it just open the floodgates to every country at once?

It turns out that there are many local considerations before the good folks at Kickstarter deem a market ready for creators. The “community” is key — that is, a group of enthusiastic people who create, back, and spread the good word across the crowdfunding ecosystem.

Rather than simply translating and launching a German version of its website, Kickstarter embarked on a major outreach campaign where it actively sought out some of the more interesting early-stage projects that may require the support of Kickstarter. Without interesting projects from the get-go, people may have dismissed Kickstarter without giving it a chance. As things turned out, there were 113 projects launched on the first day in Germany, with more than 400,000 euros ($450,000) pledged.

But it’s not just about the community. Kickstarter has also been fine-tuning the inner workings of its payment system to cater more for local payment systems.

Back in January, Kickstarter ditched Amazon Payments in favor of Stripe, which removed the need to set up an Amazon Payments business account (which could take days) and required them to simply enter their existing bank account details when drafting a Kickstarter project. Ultimately, it was designed to make it as easy as possible for creators to receive funds in their local currency using their existing bank details. For backers, it meant a much faster checkout process too.

The language barrier has also been a key consideration. The Germany launch was the first time Kickstarter was available in a language other than English, a trend that will continue with the upcoming France and Spain launches.

Kickstarter has also added a slew of new features such as subtitling for the obligatory product demo videos; in addition, people located in the U.S. can automatically see figures in U.S. dollars even if the project is launched in a different currency.

“Disruptive” is one of the most overused adjectives to emerge from the tech startup realm, with PR firm after startup-founder claiming to hold the key that will bring an age-old industry to its knees. The truth is, few companies ever live up to their claims.

Plucking a handful of names, in the past 20 years you could say that Skype, PayPal, Apple, Amazon, Google, Spotify, eBay, Airbnb, and Uber have disrupted, or are currently in the process of disrupting, established industries. And part of the process of creating disruption has been their global reach.

Kickstarter is very much a disruptive company in its own right, reinventing the way creatives and innovators fund their ideas from pipe dreams through to industry-shaping products. It’s true that there are other crowdfunding players, including Indiegogo, that are open to the global masses already. But Kickstarter seems to have struck a particular chord, one that has led to some huge, high-profile crowdfunding campaigns. And now that it’s beginning to ramp up its international presence, it can only go from strength to strength.