A middle class of mobile game developers making significant money is finally emerging — thanks to the preferences of lucrative players from the “long tail.”

Let’s start with the supply-side of the equation.

The steady stream of new apps across a growing number of categories (at the rate of roughly 1,400 new apps per day in the iTunes App Store alone, according to mobile gaming news blog Pocket Gamer) is a clear indication that the app economy is strong. Simply put, the app market is growing — and it shows no signs of slowing any time soon.

On the demand-side, new research reveals a shift that could spell opportunity for small and savvy app developers determined to make it big.

A review of the dominant grossing apps from MIDiA Research, an analyst firm focused on the business of paid content, reveals many of today’s blockbuster games are not acquiring new audiences. As research director Mark Mulligan puts it, these so-called superstar apps are “clinging onto their chart positions despite the fact their new audience acquisition has, in many cases, fallen off a cliff.”

At one level, the slowdown is a sign that the app marketplace is moving away from overdependence on legacy titles and one-hit-wonders. Dig deeper and conditions are coming together to produce a “perfect storm” that will potentially replace a situation where too few apps have been able to take most of the revenues, with one where more app developers will have more chances to make more money. 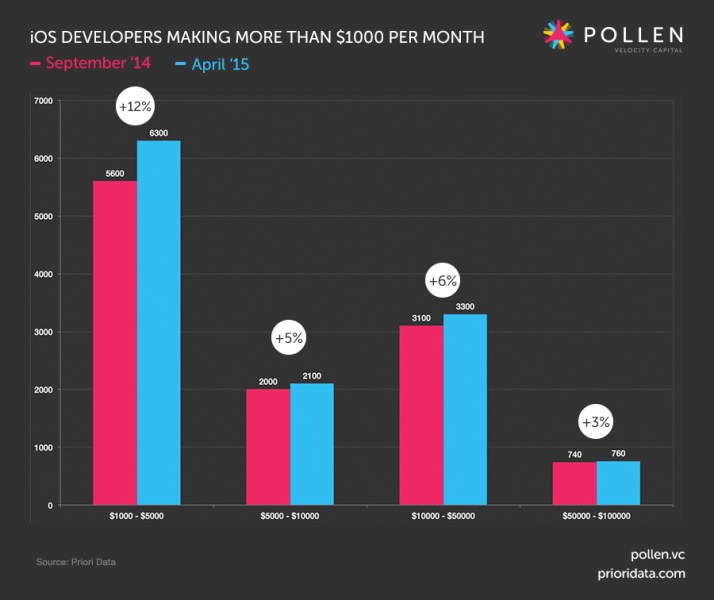 At first glance, this runs counter to the Developer Economics research series produced by market analysis and strategy firm Vision Mobile. Based on a survey of 8,000 respondents from 143 countries, The State of the Developer Nation Q1 2015 report  concludes that only 24 percent of app developers globally earn between $1,000 per month and $10,000 per month. Read between the lines, Vision Mobile writes, and “total revenues are unsustainable for over 50 percent of developers.” (Specifically, 52 percent of the developers surveyed say they make less than $1,000 per month.)

But frame the question differently and examine a different data set (namely, concrete app store data, not the input of app developers willing to reveal their monthly revenues), and a much more positive picture of the app economy emerges.

In fact, internal research from Pollen VC reveals that the last seven months have seen a significant rise in the number of small app developers able to make a good living monetizing their great apps.

The research program, together with Priori Data, a mobile application market analytics company, draws on app store data and a review of “ranked” apps — those that have been listed among the top grossing apps in the iTunes App Store — to track growth in the number of long tail developers and map their monthly revenues. The program tracked data from September 2014 to April 2015.

Among the initial findings:

Do the math and the number of indie developers making serious money with their apps is growing, and like the app economy they power, shows no signs of slowing.

Case in point: PuzzleSocial, whose Daily Celebrity Crossword app (available on Facebook, iOS, Android, and Kindle devices) reigns as the No.1 grossing digital crossword app on the planet. It’s hard-won success that PuzzleSocial CEO Jeb Balise chalks up to his early decision to “deliberately focus on the long tail by creating engaging fresh content every day for players to come back to.”

His bet on an app that combines fresh content with gaming — thus appealing to puzzle junkies and casual gamers alike — has paid off. In December 2014 PuzzleSocial raised $3 million in Series A funding, in a round led by KiwiTech that included new investments from all seed stage investors, including former HBO president Thayer Bigelow and Mark Wachen of Upstage Ventures, among others.

Of course, having a good idea is just half the battle. Long tail app developers also have to build a dedicated user base loyal to their app. As Balise puts it, “Focusing on giving players a reason to come back every day gives an app developer the most valuable asset, which is time. If you have users coming back over time, then you can figure out how to monetize them with success.”

At one level, it’s a stretch for Long Tail app developers who need to fund their growth cycle but can’t bridge the gap — a period that can be up to 60 days or more — time between making a sale and getting paid by the app store. It’s also where a model that accelerates access to app store and in-app revenues could potentially allow long tail app developers to pursue big ambitions for their apps.

At the other end of the spectrum, Mulligan over at MIDiA Research forecasts that the timing is right for long tail app developers to aim higher with their apps. He points out that the pursuit of mega-hit success by a handful of developers has created what calls “bubble economics” — a development that is driving a complete “realignment of the market place”.

It’s a seismic shift that potentially plays in favor of a long tail of app developers destined to grow in both numbers and in the amount of revenues they can generate from in-app purchases as they grasp the opportunity to turn their winning app concepts into successful and sustainable app businesses.

Martin Macmillan is the CEO and founder of Pollen VC, a financial tech platform that gives mobile developers early access to their app store revenues.