Meet Maana: an enterprise search startup with impressive technical chops that has already gotten business from some big companies. If its founders are right, Maana could wind up becoming a sort of Palantir — selling software that’s easy to set up, for a wide variety of customers.

The appeal of Maana lies in its ability to search for specific data across tens or hundreds of databases and then rapidly provide smart answers to non-technical people. One way to think about it is a way for companies to get the most out of all the different kinds of big data they’re keeping around.

“We saw classic information-retrieval-based search being applied to these new data sets with very unsatisfying results,” Maana cofounder and chief executive Babur Ozden told VentureBeat in an interview. “We knew we could do better.”

While Maana has just a few paying customers, they’re big companies. They’ve generally preferred to run Maana’s software in their own on-premises data centers — and pay for traditional annual software licenses, rather than subscriptions — although there’s nothing stopping companies from running the software in a public cloud, said Ozden, who was previously chief marketing officer for semantic search company Hakia.

Ozden sees the startup’s technology coming in the tradition of several search technologies that have been acquired — HP’s Autonomy, Oracle’s Endeca, IBM Watson’s Vivisimo, and Microsoft SharePoint’s FAST. Cofounder and chief technology officer Donald Thompson emphasized that it’s an end-to-end tool — that is, it can perform a wide range of functions, including data-ingestion, extract-transform-load (ETL), and model-building work, but also user-facing things like charting and question answering. 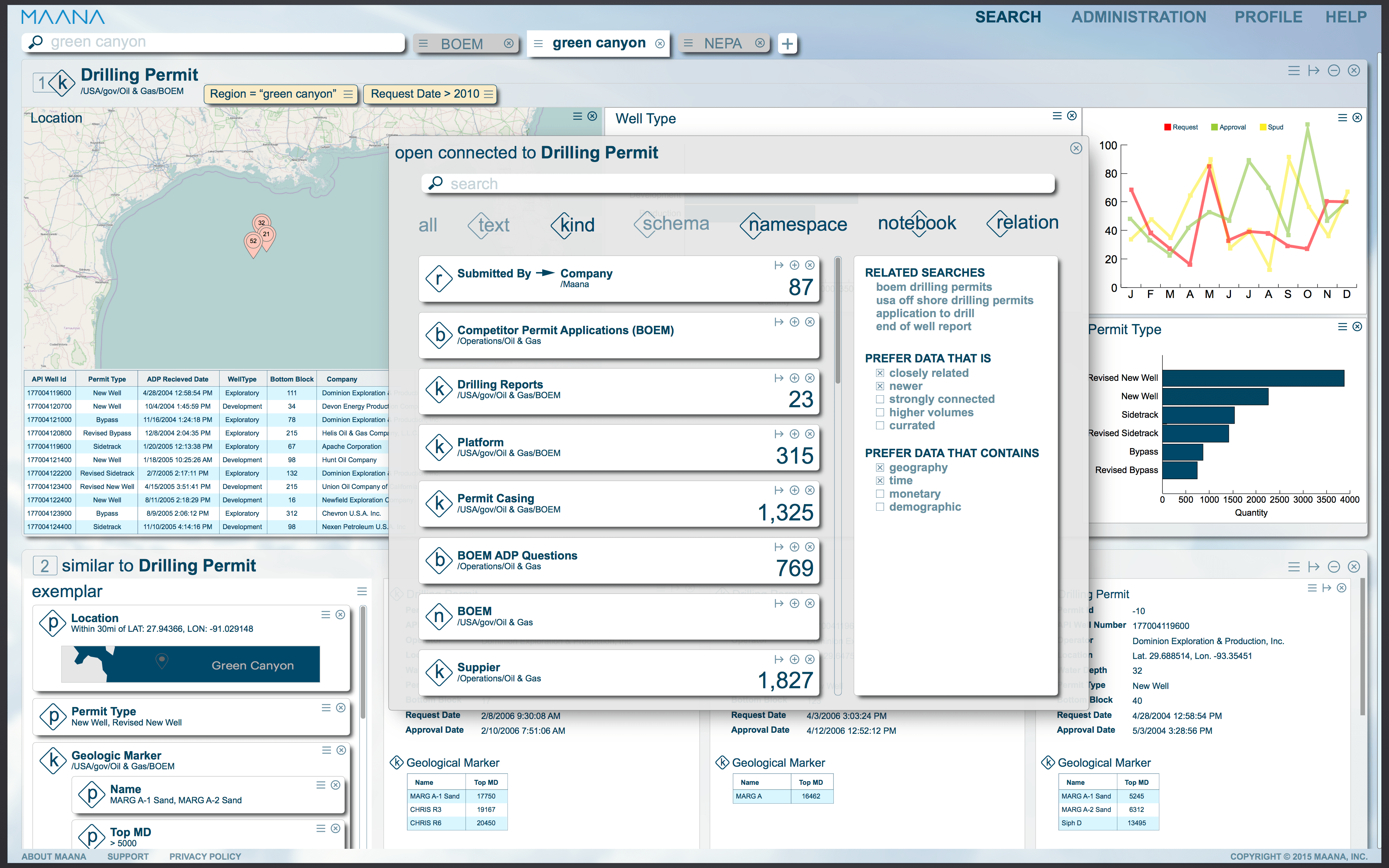 Above: A screenshot of Maana’s software.

It’s built on Apache Spark. It supports the open-source Hadoop Distributed File System for storing lots of different kinds of data. It supports .CSV, XML, and JSON documents, and it has a simple application programming interface (API), said Thompson, who worked on semantic search and reasoning for Bing during his time at Microsoft.

But the thing Thompson particularly emphasized to VentureBeat is Maana’s ability to speedily tell people what they’re trying to figure out — like identifying the right parts of industrial equipment that must be sent out from a remote facility in order to solve problems, or determining which call center rep should call what customer who’s late to make a payment.

The startup doesn’t have any immediate plans to release the software under an open-source license.

“We’re proprietary to see what the market will bear,” Ozden said.

The software is less complex than open-source search tools like Apache Lucene or Elasticsearch, Thompson said. Teams can get up and running in a few days, not months.

And in any case, it’s the kind of thing that companies’ chief information officers (CIOs) would seek to implement, rather than something one or two developers try out.

Maana started in 2012 and is based in Palo Alto, California. It employs 22 people.