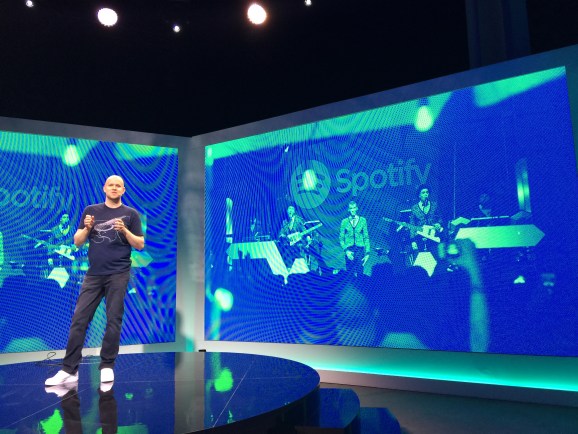 NEW YORK — Spotify announced a whole new user experience at a press event this morning on the westside of Manhattan.

The streaming service is gearing up to make the next iteration of radio for the digital world, combining music with podcasts and news to make it the ultimate audio hub. But it doesn’t stop at audio; the platform is incorporating both news and entertainment clips, making the service more of a content channel.

Spotify is also trying to personalize more. It will now pay attention to what you do at various times of the day and what you’re listening to and remembers it so it can replicate your playlist for your various activities — quite like Songza did. For the runners out there, Spotify’s mobile app will now match the pace of your running tempo with the beat of your playlist.

Earlier this month Spotify unveiled a tool for advertisers called playlist targeting, which will enable them to place ads based on a listener’s mood or playlist — an easy way to monetize its new personalized approach to music delivery.

This announcement follows a handful of rumors that said Spotify planned to launch some sort of “Web-video business” to challenge YouTube and Facebook. Previous reports mentioned potential partnerships with a variety of media outlets including Viacom, NBC Universal, Fox, Vice, and Conde Nast.

The company was also rumored to be raising a $350 million round of funding earlier this month that could easily be used to build out video infrastructure.

The launch of Spotify’s video play comes as other tech companies like Snapchat and Facebook are building out their content offerings; as viewers continue to move away from the television, more companies are emerging with digital platforms for them to turn to.

Spotify’s already frightened the pants off the most valuable company in the world, and now it looks like the nine-year-old Swedish company wants to steal attention away from YouTube and Facebook’s lucrative video ad business. Spotify first debuted video ads back in September. We’re going to go ahead and assume that launch went well.

Spotify will begin rolling out its new home screen to users in the U.S., U.K, Germany, and Sweden today. The new running experience also comes out today, but will be available to all users.