SwiftKey has finally lifted the lid on how it plans to monetize its smart predictive keyboard app for iOS. And it’s taking a cue from how it makes money on Android.

An update to the free SwiftKey app for iPhone and iPad reveals a new theme store is now available, letting you personalize the “look and feel” of the keyboard with 12 premium “skins” available to purchase in-app for between $0.99 and $1.99. This is in addition to the three existing free themes. 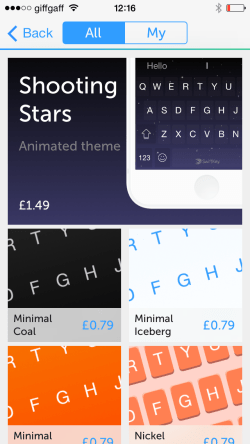 Above: SwiftKey Theme Store on iOS

If you’re new to SwiftKey, the app has developed a solid reputation over on Android for a number of years, replacing the default keyboard on your phone or tablet, and learning your writing style over time to expedite typing. It even predicts your next word before you’ve started typing based on historical patterns, while its built-in “Flow” feature lets you type speedily by gliding your finger over the keyboard.

Fresh from a chunky $17.5 million funding round to get smarter and grow bigger, the London-based startup announced a major change to its consumer business model in June 2014. It revealed it was dropping the $3.99 download cost on Android in favor of premium themes that let users pay to customize the keyboard.

SwiftKey finally launched for iOS in September after Apple opened up to third-party, system-wide keyboards. However, the app has thus far been completely free, with no install fees or in-app purchases. The company’s decision to bring its premium theme store to iOS is perhaps not surprising, and it’s the obvious first step for the company as it looks to drive revenue from its popular app.

VentureBeat has been checking out the new iOS themes ahead of today’s launch, and there’s not a huge aesthetic deviation from what’s available on Android. But there are a few notable exceptions — “Shooting Stars,” for example, is an animated theme with twinkling stars and a parallax effect.

Strictly speaking, this isn’t SwiftKey’s first foray into animated designs, though — last year the company launched branded themes for Android, one of which was based on Disney’s computer-animated kids’ classic Frozen. This featured an animated trail of snow as your finger glided across the keyboard, with the resulting snowfall “melting” at the bottom. However, “Shooting Stars” for iOS is the company’s first permanent theme that sports an animated background.

Brand partnerships would be an obvious way for SwiftKey to monetize even more on iOS, but the company hasn’t confirmed any plans for this. 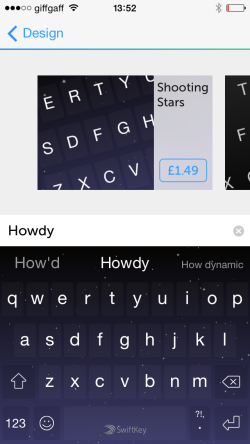 Another key differentiator in the SwiftKey theme store on iOS is that you can preview a new theme before committing to purchase, letting you type words with the new theme without installing it.

For those happy with the default “dark” SwiftKey theme, the latest iOS update also introduces a number of stability and performance enhancements — and in many ways this may actually be the more important news.

Over on Android, SwiftKey had years to build a steady following devoid of hype and which was based on word-of-mouth. By the time it came to launch on iOS last year, the hype train was full steam, so it was subjected to significant scrutiny upon launch — meaning bugs and such like were perhaps a little more accentuated.

SwiftKey has introduced updates to fix some of these issues previously, and with the latest version of the app it says it has eliminated more, including instances where SwiftKey would be inexplicably replaced by the default iOS keyboard.

The new SwiftKey for iOS is available to download now.