Yahoo has issued a statement to counter fears that its move to spin out its Alibaba stake may be in jeopardy, stating that its plans remain completely unchanged.

Yahoo revealed back in January that it planned to offload its lucrative shares in Chinese e-commerce titan Alibaba into a spin-out company called SpinCo, as a means of sidestepping some of its tax obligations further down the line. “The stock of the new company will be distributed pro rata to Yahoo shareholders, resulting in SpinCo becoming a separate publicly traded company,” the company said at the time.

However, news emerged yesterday of a comment made by a representative of the U.S. government’s Internal Revenue Service (IRS), suggesting that it was looking into existing rules around spinoff companies. It wasn’t entirely clear how it may or may not affect Yahoo’s plans, given that the wheels of that deal were already in motion. 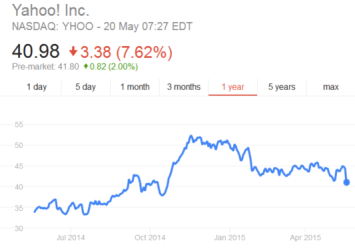 Regardless, Yahoo’s shares dropped 7.6 percent to $40.98 yesterday, though they rose slightly in pre-market trading.

Notably, this was Yahoo’s lowest market value since October, having undergone a steady resurgence over the past seven months. In a move to remedy this latest drop, Yahoo reaffirmed that it still plans to spin off its Alibaba shares in Q4 2015, that the quote attributed to the IRS was not specific to Yahoo, and that it “does not affect previously filed ruling requests.”

The statement in full reads:

An IRS representative stated Tuesday that the IRS plans to study its rules for issuing private letter rulings regarding the active trade or business requirement in spin-off transactions and will hold off processing new ruling requests. Yahoo understands that the IRS’s statement is not specific to Yahoo’s planned Q4 2015 spin-off of its remaining stake in Alibaba Group and Yahoo Small Business, reflects no change in applicable law, and does not affect previously filed ruling requests. Yahoo filed its pending ruling request with the IRS in Q1 2015. Yahoo continues to work toward completing the planned spin-off in Q4 2015.

That Yahoo has issued a statement on what was apparently a general comment from an IRS representative is indicative of the size of Yahoo’s sudden shares slump. And it will be interesting to see what impact this has when Nasdaq trading opens at 9.30 a.m. (EDT).