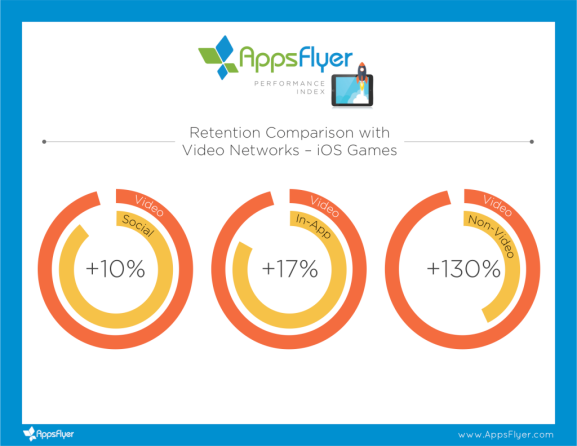 Android players stick with their games for a shorter period of time than those on iOS, and video ads are the best way to attract people who will play longer on mobile platforms, AppsFlyer said in a new report.

Among other findings, the report compares video ads, typically presented in-app by an ad network, versus social, non-video, and other in-app ads. Video ads were 130 percent more likely to keep players for a longer time in iOS games, the report said. They performed better than the rest 80 percent of the time on Android devices.

“Video is a great ad format for mobile apps because it allows the user to see the app in action,” AppsFlyer chief executive Oren Kaniel said. “A good video trailer shows off the gameplay, the graphics, the movements, etc., and does a much better job of highlighting what an app is really like than any text-based ad or static graphic ever could.”

That in-depth exposure to gameplay means users are more interested and more likely to stick around when they tap to see more, he said.

The study also showed that players on iOS platforms were 72 percent more likely to stay for 30 days and beyond than those on Android hardware.

“Most iOS devices are high-end and relatively costly, while Android devices have a significant variance among them with a multitude of manufacturers and models that run on Google’s mobile OS,” Kaniel said. “This explains why studies have consistently shown that iOS users are, on average, more affluent and tech savvy, which in turn is translated into higher engagement, revenue, average order value, retention and other qualitative parameters. Our research shows that the iOS games vertical is no exception.”

Above: An AppsFlyer chart showing how well ads convinced gamers to stick around on iOS and Android ad networks.

The study offers details on whose networks win for attracting gamers who stay. Surprisingly, big names like Google, Facebook, and Twitter are not at the top of the list. On iOS, Vungle showed the best one-day retention (that is, players who opened their games more than once after downloading) while AppLovin was most likely to attract players that were still around after seven and 30 days, the report said. For Android, the retention winner across the board at one, seven, and 30 days was AdColony.

That doesn’t mean that these vendors were the best at flat-out attracting downloads; that’s power, not retention, and Facebook leads the way there on both iOS and Android, the report said. Chartboost was second on both platforms, followed by AppLoving on iOS and Mobvista on Android, then by Google Adwords on both platforms.

The study said that, on average, the drop in retention across all networks between the first day and day seven is 56 percent; the drop between day seven and day 30 is 80 percent.

Above: Mobile gamer retention by which ad network they came from at one, seven, and 30 days.