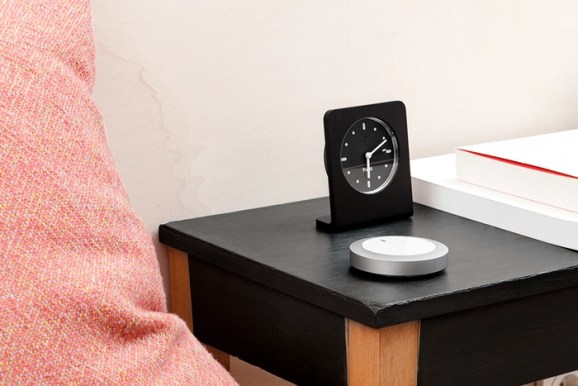 Each week our friends at Backerjack provide an update on a hot crowdfunded tech gadget. This week we profile Nuimo, which has tripled its funding goal.

With the number of apps for it slowly increasing, the smartwatch has a shot at supplanting — or at least complementing — the smartphone as the control point for the connected world. But smartwatches aren’t really communal objects around the home and navigating them can often be laborious.

Nuimo seeks to address those issues. The simple control disc, available in a black or silver-white combination supports four main modes of interaction. Users can click them, rotate them, swipe their surface, or perform gestures above their surface. The last three gestures support multiple directions. The campaign video shows Nuimo responding to a music volume command by having the user raise her hand above the surface of the device.

Nuimo can provide simple iconic status notifications with an 11×11 LED grid. It can also be mounted on walls or refrigerators with its magnetic backing. Berlin-based Senic, developer of Nuimo, hopes to raise $61,374 on Kickstarter by June 12. A Nuimo controller costs €129 (about $144),, which is 30 percent off the suggested retail price. It’s due to ship to backers in October.

Nuimo draws upon the appeal of products such as the Nest thermostat (which it can control) and extends it by adding more gesture controls and more versatility. It may take a while to set up all the things it can do but the gestures would likely become second nature before too long. and the form factor is even more streamlined and elegant than other universal controllers such as the Neeo. Despite is portability and ability to work off batteries, it’s easy to see why someone may want a couple of them around the home.

For more cool projects, check out this digital pen that can use any surface to scribble smartphone notes, what may be the ultimate smart leash, and this mug that can keep beverages piping hot.