A few weeks ago, I bought a Toshiba Chromebook 2 to use while Apple was repairing my MacBook Air. I’ve gotten to like it for my admittedly limited computing needs.

The Chrome browser counts for a lot on a Chromebook. Within it, I can write and edit documents with Google Docs, Sheets, and Slides — the 100GB of free Google Drive storage is much appreciated. Chrome also provides access to additional Google Web services, like YouTube, Maps, Play Books, and Play Music.

I can use dedicated Web apps that come by default like Hangouts, Keep, Google+ Photos, Play Movies, a calculator, and a camera. And through the Chrome Web Store I can discover more Web apps from third-party developers and Google itself.

Once you can accept the foundational assumption underlying Chromebooks — that storage should be primarily offloaded to external cloud services, such that the devices serve as glorified thin clients — you can get on with your life and use these machines happily.

I was able to do that pretty easily.

Google first unveiled Chromebooks at its I/O conference in 2011, with several hardware vendors making their own versions and Google coming out with its first-party high-end Chromebook Pixel at I/O in 2013.

At last year’s I/O, Google showed off more improvements, like the arrival of Google Now cards on Chromebooks.

Sure enough, Chromebooks are starting to catch on. Analyst firm Gartner last week forecast that 7.3 million Chromebooks will be sold this year, 27 percent more than in 2014. And in the education market, Chromebooks have already started to outsell iPads.

At I/O this week — on Thursday and Friday at the Moscone Center here in San Francisco — I’m hoping that Google and its partners will announce more improvements for the Chromebook, and Chrome OS more generally. (The schedule for the conference doesn’t show many sessions related to Chrome OS or Chromebooks, but that doesn’t mean there won’t be any announcements in Thursday’s keynote.)

Now that I’m an actual Chromebook user, I’m genuinely interested. I don’t want to see Google gradually move Chromebooks away from the spotlight, like some other products in its history.

So what do I want to see?

Non-Google videoconferencing tools like Skype would be cool. Non-Google file-sharing and creation tools, like Dropbox and Quip, would be nice additions as well. There are no Web apps for non-Google music-streaming apps like Spotify and Rdio, and the same goes for task list apps that could do better than Keep, including Asana, Trello, and Wrike. (Props to Wunderlist for having a Chrome OS app.) 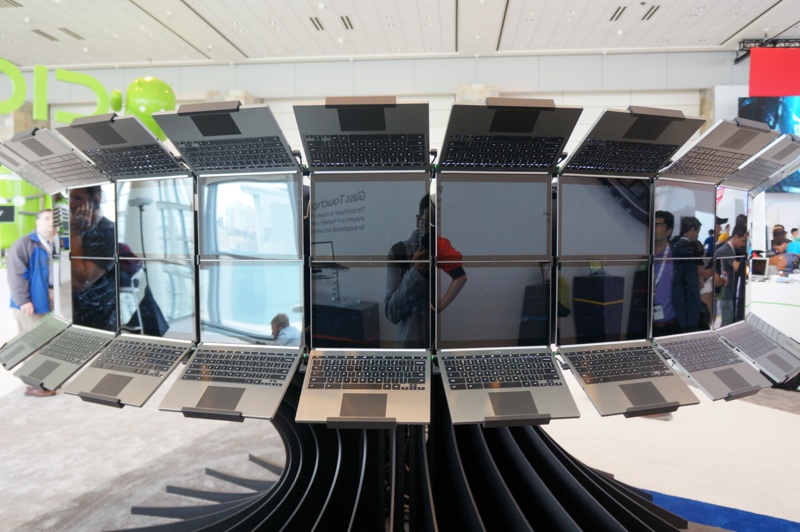 Above: An art installation feature Chromebook Pixels at the 2013 Google I/O conference.

Google has been working with companies to bring more complicated applications to Chrome OS. For instance, Adobe has been collaborating with Google on Project Photoshop Streaming. But there’s more to do, and I’d like to see Google announce more partnerships like this.

Of course, you can use these apps well enough in the browser, and maybe Internet-oriented Google is just fine with that, but desktop-style Web apps look and feel better and seem to offer better performance.

One way to solve the Web app problem may be to make a stronger Crouton.

Crouton, which stands for Chromium OS Universal Chroot Environment, is an open-source package of scripts that let you run Linux on devices running Chromium OS, including Chromebooks. In forums about applications that don’t have dedicated Chrome OS Web apps, sometimes people suggest Crouton as a potential bridge.

But Google isn’t the official entity behind Crouton, which requires command-line tinkering and isn’t without technical issues. Perhaps Google could do more to strengthen Crouton and thereby make it easier to run special desktop apps on Chromebooks.

Another way Google could solve the app-availability problem is to make it super-easy for developers to port their Android apps to Chrome OS.

At last year’s I/O, Sundar Pichai, senior vice president of Android, Chrome, and Apps at Google, showed off Evernote, Flipboard, and Vine apps for Android running on a Chromebook.

They were produced through a Google technology called App Runtime for Chrome, or ARC.

But ARC as a whole is still in beta. Google could well make the system generally available at I/O this week and also announce some additions to it.

When it comes to pushing Chromebooks into big businesses, Google can do more.

Not that it hasn’t done anything in the enterprise department.

Later that year Nvidia announced an alliance with VMware and Google to ensure that graphically intensive Windows apps could run well on Chromebooks, and Google partnered with Cisco to bring WebEx to Chromebooks.

Most recently, in October, Google introduced a formal Chromebooks for Work package, allowing companies to pay $50 per Chromebook per year for features like single sign-on, managed bookmarks, and certificate management for wireless networks.

Announcements like these seem to be genuinely useful. But if you ask Gartner’s analysts, they’ll tell you education, not big business, is the main market for Chromebooks right now.

I don’t know what exactly Google should roll out in order to get rid of the Chromebooks-are-for-students narrative. But I/O, being the largest Google event of the year, would be a good time to announce something.