Whenever the game designers at Stockholm-based Avalanche Studios wanted to build a game, they always pointed to the action-packed thrills of Mad Max. So it’s only natural that they are making the Mad Max video game for Warner Bros.

But Christofer Sundberg, who cofounded of Avalanche in 2003, told me in an interview that it took a while before Warner and Avalanche could figure out what to do together. It took a couple of well-received Just Cause action games before they decided that Avalanche should do the video game based on the new film, Mad Max: Fury Road.

Sundberg and Peter Wyse, the vice president of production and development at Warner Bros. Interactive Entertainment, talked to me recently about the making of a game in a joint interview after they showed the first previews of Mad Max’s car combat. Here’s an edited transcript of our conversation. (See our preview of the Mad Max game here). 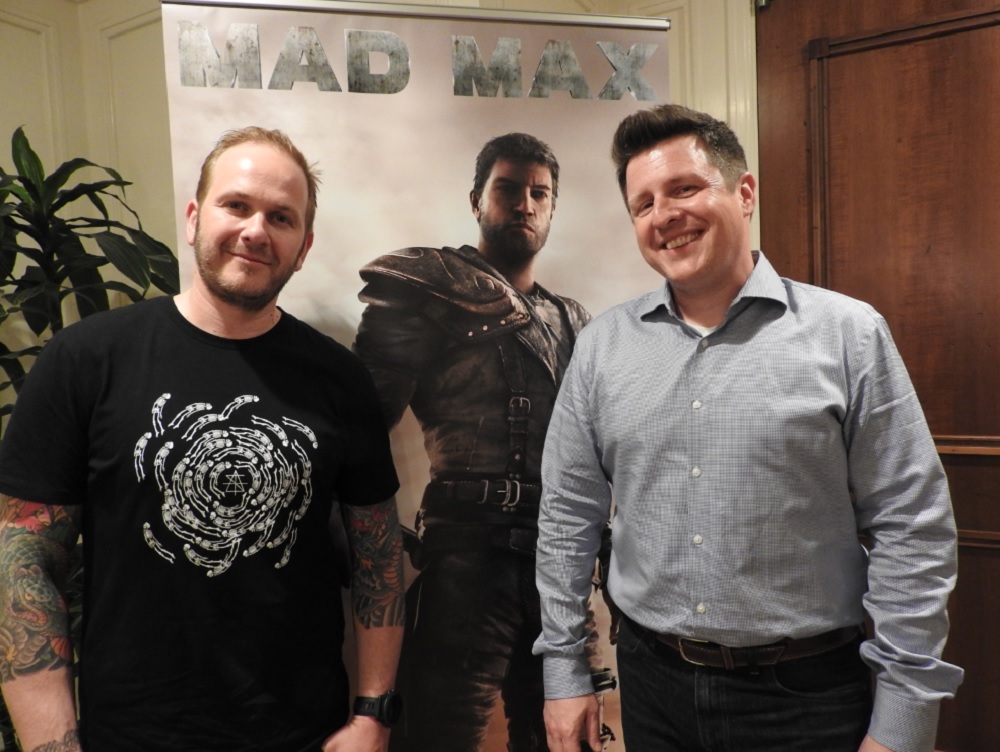 Peter Wyse: More than three years on this iteration.

GamesBeat: Is this the first time they’ve let you out?

Wyse: We were at E3 two years ago. Then we took a step back, retooled, and put a lot more effort into it. We switched to the next generation. This is our coming-out party.

GamesBeat: How did it begin, then? What was the process of getting started and then pivoting?

Christofer Sundberg: We’d talked to Warner Bros. for quite a long time about different games, different projects. Every game you work on starts differently. But when we worked on a concept for a Western game, for example, we always referred back to Mad Max. It’s the lone hero in the wasteland and so on. When we worked on post-apocalyptic concepts before, likewise, we always referred to Mad Max. One day the business development people at Warner Bros. called us up and asked if we wanted to work on a Mad Max game. Obviously, we jumped on the opportunity.

GamesBeat: How much of the new movie did you have in front of you to that you could see what they were doing?

Wyse: We saw a lot of the universe established. What you see in the film was in George Miller’s mind and on paper and in concepts. He’d even had some of the cars built out already. We were able to absorb the universe that Miller had already created.

GamesBeat: I guess you started a long time ago on a Xbox 360-generation game, though?

Wyse: This game started on both. Then we said, “All right, let’s put the horsepower into a next-gen game.” We canceled the older generation.

GamesBeat: Did that match well with the film’s timing?

Sundberg: We haven’t really followed their schedule. For us, we’ve been focused on creating the best Mad Max experience that we could.

GamesBeat: It’s an interesting departure. In the past, games were usually mandated to come out with a movie release or DVD release or whatever. You got out of that.

GamesBeat: It’s an open world. What else went into your concept? What did you really want to accomplish?

Wyse: There are two threads. The heart of the game is the car combat. If you take the open world, you have a thread that runs through it, and that’s our narrative, that story. You lose your car and you have to rebuild it. That leads to the car combat. These are all means to an end, which is building the ultimate car, silencing the voices in Max’s head, finding the place of peace.

Everything in the game, every alliance you make, is a means to that end. You ally yourself with Chumbucket because he’s a mechanic who can build you that car, not because he’s your friend. He’s a means to an end. 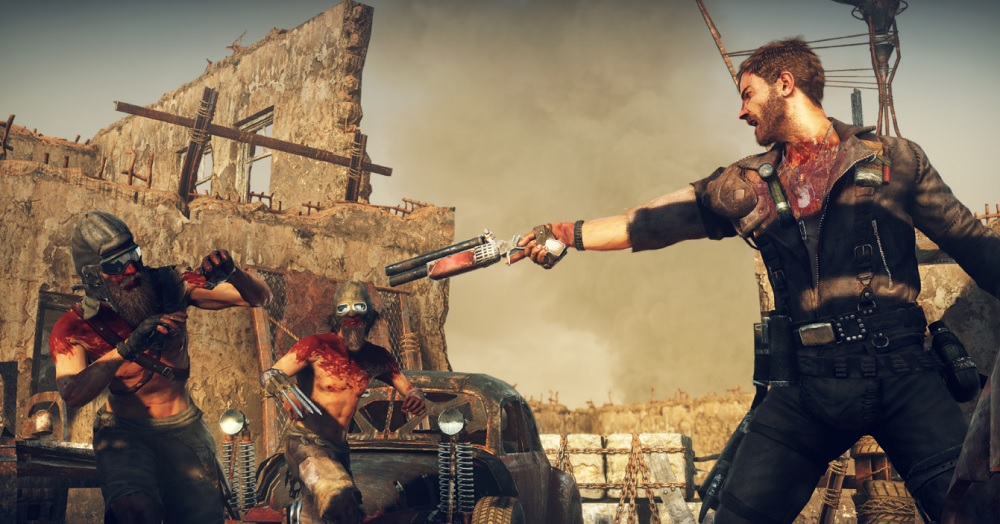 GamesBeat: Do you have the freedom to depart from a film’s story as well?

Sundberg: Absolutely. Traditionally it’s been movie-based games, where you play the movie. In this case it’s completely new. It’s the Mad Max game universe. There are points from the movie that may be familiar if you play the game, but the game stands on its own two feet. We don’t have the actor from the movie. It’s a new Max. It’s a Mad Max gaming experience.

GamesBeat: Did Warner at some point just learn this lesson, that games are better off with their own stories?

Wyse: I think so. It starts with Arkham. You take Batman, where you have someone doing an amazing job over in the film area and then you have Rocksteady doing an amazing job in the game area. That’s a lesson we took to heart. You can have successes in both realms. There had been too many play-the-movie games. Those are constrained by trying to get out day and date with the film, or having to play this or that beat. It doesn’t serve the gamer. We have to make games that serve the gamer.

GamesBeat: Were there any previous games in this genre that you could learn from?

Sundberg: We’ve always developed sandbox games and open world games. We have the Just Cause series to pick and choose from. We’ve partially been inspired by that. The closest game that could compare to Mad Max is probably Red Dead Redemption. But it’s really a new experience. The car combat is something we haven’t seen before.

Wyse: The horse wouldn’t last long. But that was the appeal of going to Avalanche. No one builds chaotic big open worlds like they do. The systems of that world and how—You put a bunch of rules into that open world and let the player play with them. Attaching a harpoon to a structure can pull it down, but attaching a harpoon to a car and hitting the nitrous can slingshot you into it and deal triple damage. Let’s just make some rules, set up some loose parameters, and see what chaos it can bring. Then you contain the chaos a little bit and tell a story here and there. Hopefully gamers feel like it’s its own unique thing.

GamesBeat: How large an open world did you try to make here? I noticed it seemed very densely packed.

Sundberg: That’s the challenge. We can create an infinite world if we like, but if it takes you four hours to get from A to B, it’s kind of boring. We scaled the world to fit the density of the gameplay. We can easily shrink and grow the world to fit the experience. We don’t put any value in how big the world is, because that’s not important. What’s important is what players actually do in the game. We make sure the driving is fun and challenging and rewarding.

Wyse: We fit in tons of choices. I’ll spend hours sometimes just scrap-hunting, because scrap is the economy of the game. It’s what allows me to upgrade my car and upgrade Max. I’ll just get lost doing one activity, and then I’ll realize, “Oh, I should get back to the story.” I spend a couple of hours on the storyline and then get lost doing another side activity. Maybe I just want to tear down buildings for a couple of hours. We wanted to build a world with tons of choices and tons of distractions for the gamer. 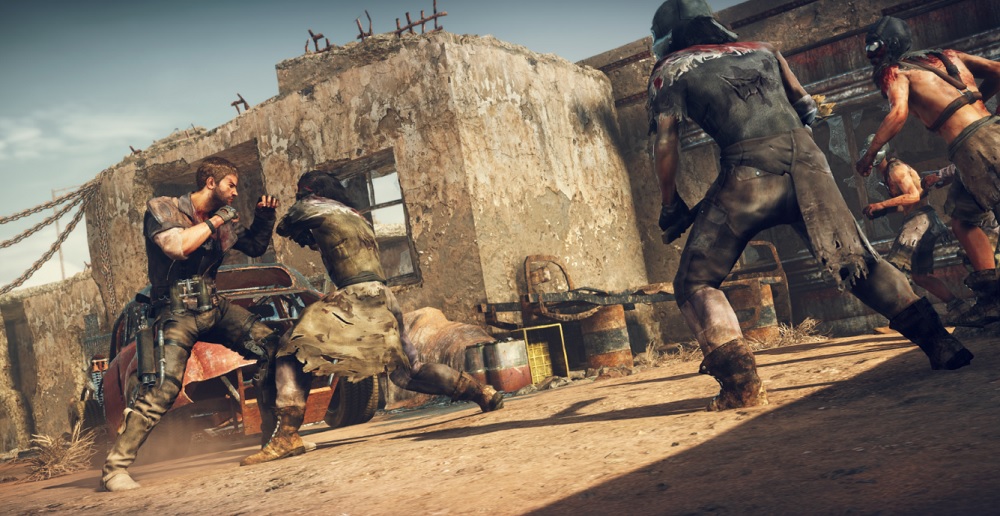 GamesBeat: You still have a lot of scarcity in this world. You’re picking up scraps everywhere.

Wyse: Scrap, ammo. Ammo’s very scarce. But in those moments where you hoard it, all of a sudden you’re the most powerful person in the universe. If you’ve hoarded all this ammo, you can take out a big portion of a camp. But then, when you’re out, you have to be really careful about how you take on the next couple of hours of gameplay before you look for more resources.

GamesBeat: There’s a challenge there, where it’s more fun if you’re in a land of plenty, but if you get too much of that, it becomes too easy.

Wyse: Exactly. That’s something I’m the most proud of. The wasteland they built, it feels like a desperate place. When I get those resources, I’m like, “Oh, thank God!”

Sundberg: The shotgun isn’t something you can run around with, blasting away. It’s more like a last resort, when you feel you can’t do anything else. That’s when you pull out the shotgun. This isn’t a shooter.

GamesBeat: Can you talk about the tech? This is a pretty game — the human faces, the landscape, the cars.

Sundberg: It’s been a challenge, developing a game that’s 99 percent sand. I think it’s the most beautiful brown game in the world. I’ve never seen a brown game look this good. But the technology is an evolution of the Just Cause 2 engine. We’ve been building on it over the years. What makes it unique is the focus on open world games, sandbox games, from the very beginning.

We particularly focused on the ground in this game, because we don’t have planes like we did in Just Cause. It’s about creating variation. What you saw today is just a little portion of the big world. It changes the further you go into the game. Where you start looks completely different from where you end up.

Wyse: One of the things I love is the cinematics. They’re able to push how the skin looks, the lighting, but everything is in real time. How Max has customized the car plays out in the cinematics. It’s all in-engine. 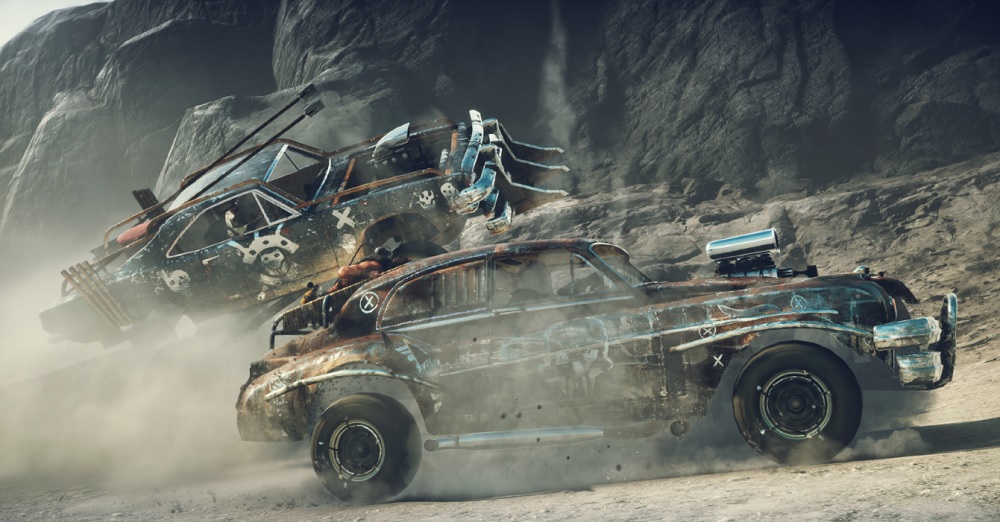