Everyone loves getting something for free, and no one knows this better than publishers of free-to-play video games.

Heroes of the Storm, Blizzard Entertainment’s new multiplayer online battle arena (MOBA) game, is the latest to adopt this strategy. It offers the majority of its content for free, but how “free” is it, really? Can you play it without ever spending a dime? The answer is yes — if you’re patient and don’t care about cosmetic items.

And if you’re a beginner — or someone who has played a lot of League of Legends, Dota 2, or other MOBAs but not Heroes of the Storm — check out our getting started guide.

What can you get for free?

Heroes of the Storm’s business model closely resembles that of another MOBA, League of Legends. Both offer a rotation of free-to-play characters on a weekly basis. Heroes gives you up to seven freebies depending on your player level while League offers 10. If you want to play other characters, you need to unlock them by spending in-game currency or real-world cash. 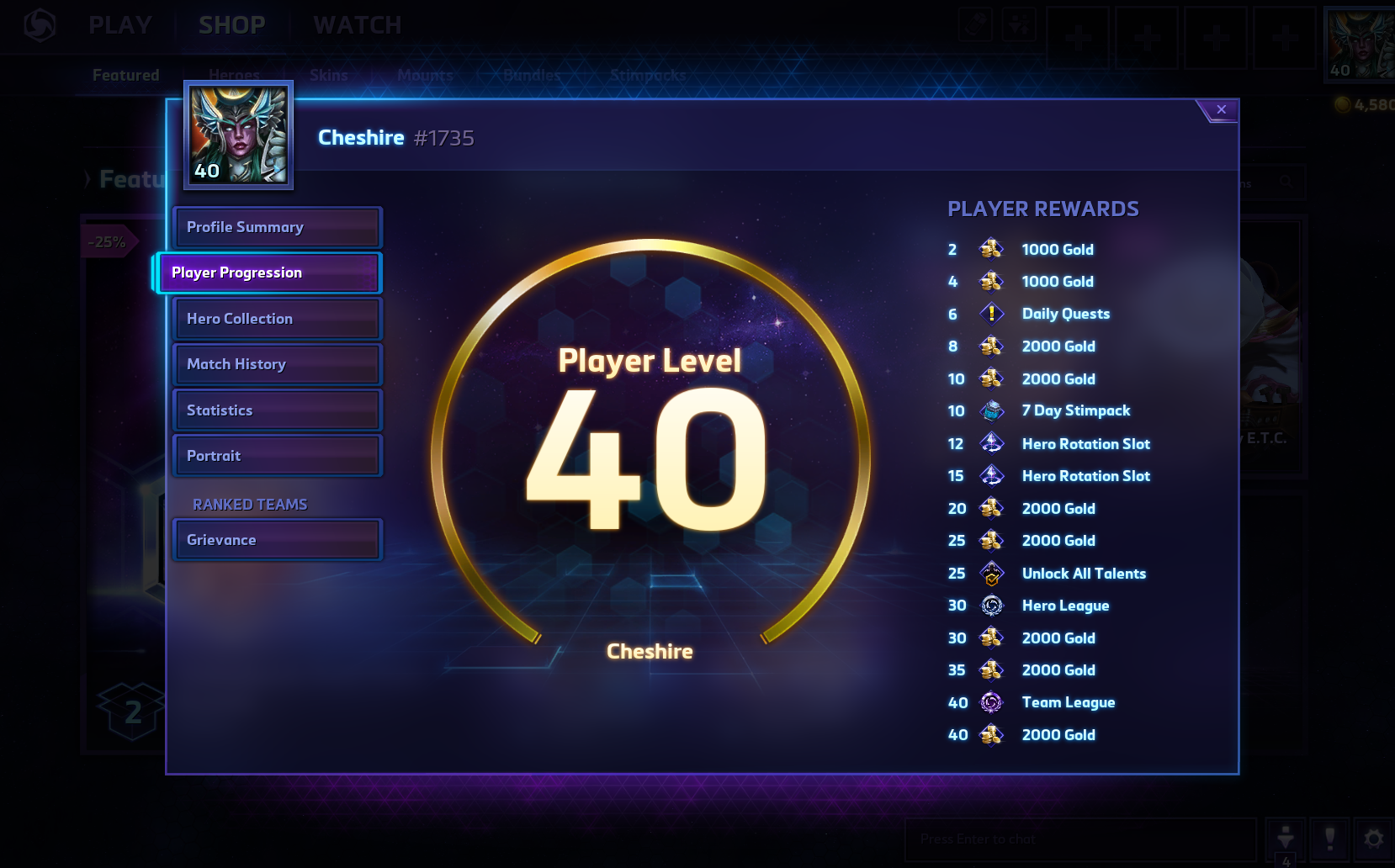 Above: Reaching the player level cap of 40 in Heroes of the Storm awards you 16,000 gold.

If you’re looking to play frugally, unlocking new heroes with gold is obviously the better way to go. Luckily, Blizzard is fairly generous when it comes to doling out rewards.

Just like Blizzard’s popular collectible-card game Hearthstone: Heroes of Warcraft, Heroes of the Storm offers up to three daily quests per day. Some of them ask you to complete two matches with heroes from one of the publisher’s cherished universes (Warcraft, StarCraft, or Diablo). Others ask you to play three matches while fulfilling a certain role (Warrior, Support, Assassin, or Specialist). These quests typically award you 200 or 300 gold. One daily quest gives you 800 gold for playing eight matches in any mode. Notice that it doesn’t ask you to win those matches. You just have to play them.

Heroes of the Storm also rewards you for hitting certain milestones. The first is your player level; by the time you reach the current cap of 40, you’ll earn 16,000 gold. Additionally, you receive an extra 500 gold every time you get a hero to level 5. This means that, with the current roster of 36 heroes, you can make a potential 18,000 gold. Combine these rewards with your daily quests, and you should have a decent roster of heroes by the time you unlock Hero League at level 30 — as long as you don’t blow it all on high-priced characters like franchise favorites Thrall and Jaina.

What do you have to pay for?

OK, so the system for unlocking characters seems fair. That’s the good news. The bad news is Heroes of the Storm kind of gouges you when it comes to cosmetic items.

There are three different types of character skins available for purchase. Rare skins cost $7.50, epic skins are $10, and legendary skins are $15. Master skins, however, are unlocked for free when a hero reaches level 10, or they can be bought for 10,000 gold. These prices seem a bit expensive when compared to Heroes of the Storm’s biggest competitors, Dota 2 and League of Legends. Many Dota 2 hero skins cost $4. Some are as low as $2.50. League of Legends sells skins with its in-game currency, Influence Points, or with Riot Points, which you can buy in bulk with cash. 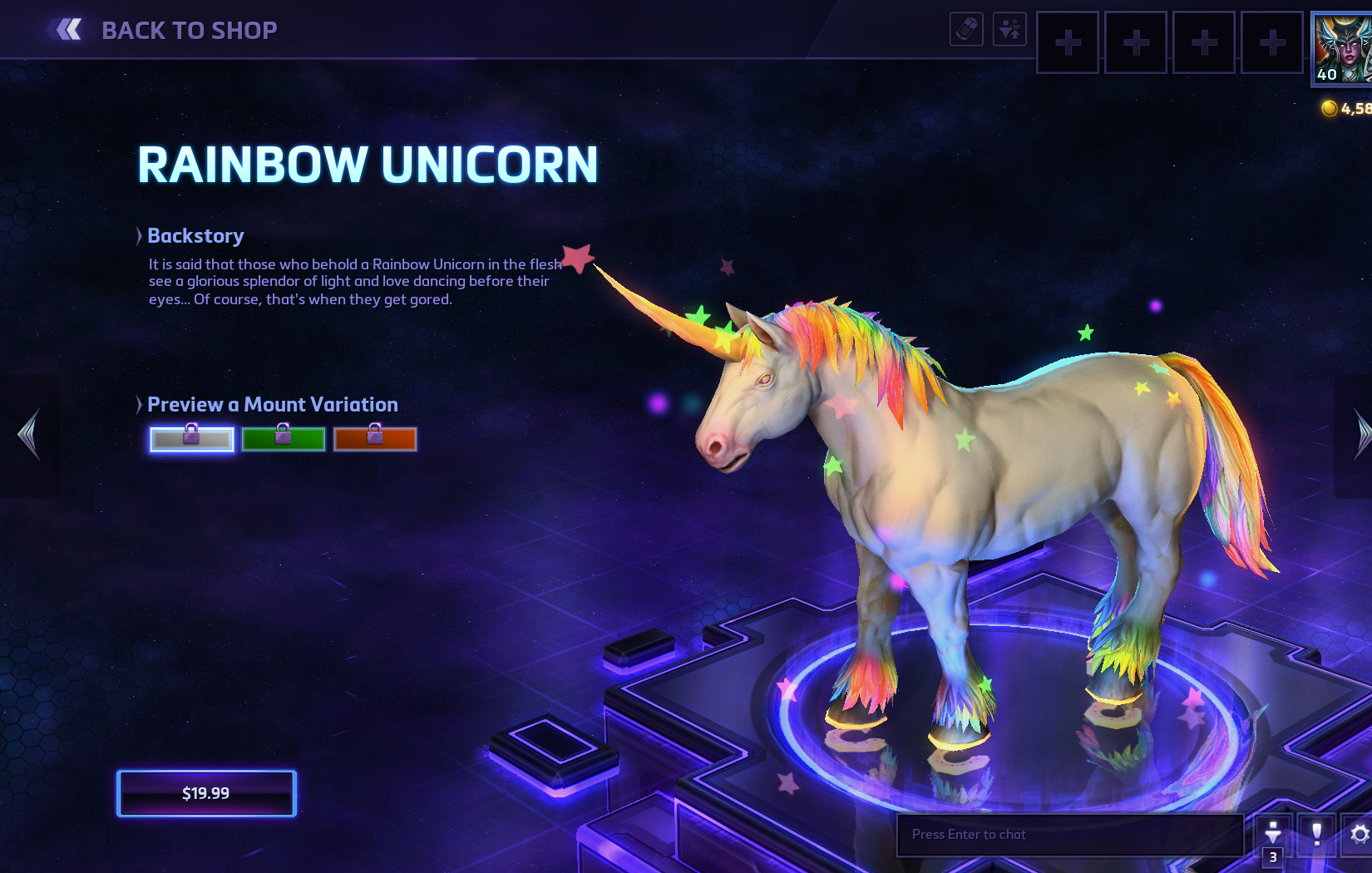 Above: The Rainbow Unicorn is currently the most expensive mount in Heroes of the Storm.

Heroes of the Storm mounts are also pricey. The Magic Carpet and the Lunar Festival Tiger will each set you back $10. The Rainbow Unicorn is the most expensive mount right now. That costs $20. You could buy an entire indie game on Steam for less.

If you want to get to the level cap as quickly as possible, you can buy stimpacks to boost the amount of experience and gold you earn while playing. A seven-day stimpack costs $4, while a 30-day stimpack costs $10. These prices seem comparable to League of Legends. That game’s seven-day experience booster costs 520 Riot Points, which is under $5. Dota 2 currently does not offer XP boosters. Alternatively, you can save money by simply grouping with friends for a 50 percent XP boost.

Bundles can be a good way to jump-start your Heroes of the Storm career at a deep discount. The Starter Bundle, which gives you three heroes and a mount, would cost you $21.96 if you bought all of those items separately in the shop. But if you buy the bundle, you only pay $4.99. The Nexus Bundle costs $39.99 and includes eight heroes, four skins, and two mounts. Buying all of these items in the shop individually will cost you $126.86 (!).

Keep in mind that all of these things are optional. You don’t need stimpacks, skins, or special mounts to play and enjoy the game. But if you absolutely need that Funny Bunny Murky skin or you want to play a certain hero right now and you don’t have the gold, be prepared to pay.