The Casual Games Association paid for Jeff Grubb’s trip to Casual Connect Asia, where he presented a lecture. Our coverage remains objective.

China is enormous for smartphone gaming, but that’s led to developers oversaturating the app stores in the world’s most populous nation.

Around nine out of 10 (91 percent) of all games released in China fail to find an audience, 21Pink executive director Calvin NG explained to GamesBeat. 21Pink is a social-casino game publisher in China, and NG gave a presentation at the Casual Connect conference to share what his team has learned. NG explained that the high failure rate for mobile games in China is due to the way the publisher system works. For a game to succeed, it almost certainly needs a publisher capable of making deals to release it on the various Android distribution channels. But publishers are very demanding, and they won’t support a game for more than around three to four weeks before giving up on it if it doesn’t start bringing in the cash.

A few companies, like Kick9, are trying to eliminate the need for publishers by offering distribution services without taking over the entire game, but — for now — the Chinese market’s barriers are too high for most developers to go it alone. So NG talked about a few ways developers can maximize their chances.

“Chinese people like gambling elements,” said NG. “You should definitely add gambling to your game. Such as jackpots or scratch cards to win something.”

Even if your game isn’t related to wagering or gambling, NG says that Chinese players are more likely to respond to an app if it features some sort of game of chance in it. These same players also enjoy more competitive games and enjoy going head-to-head.

This is something that Juan Li, project manager at publisher Portal2China, explained to GamesBeat that this is why many Western games simply won’t work in China.

“This market is really related to the culture,” she said. “It’s all about the behavior of the people.”

In Li’s own presentation at Casual Connect, she said very plainly that behavior is all about going head-to-head with other players and beating them. To facilitate this, most successful Chinese mobile games have chat where people can talk smack — and many games are even adding live video so people can really jaw at one another.

But gambling and competitive mechanics are only the minimum requirements for appealing to a Chinese audience. NG points out that one good way to stand apart from the crowd — at least at this point in time — is to make games for women.

“We have an increasing female audience,” said NG. 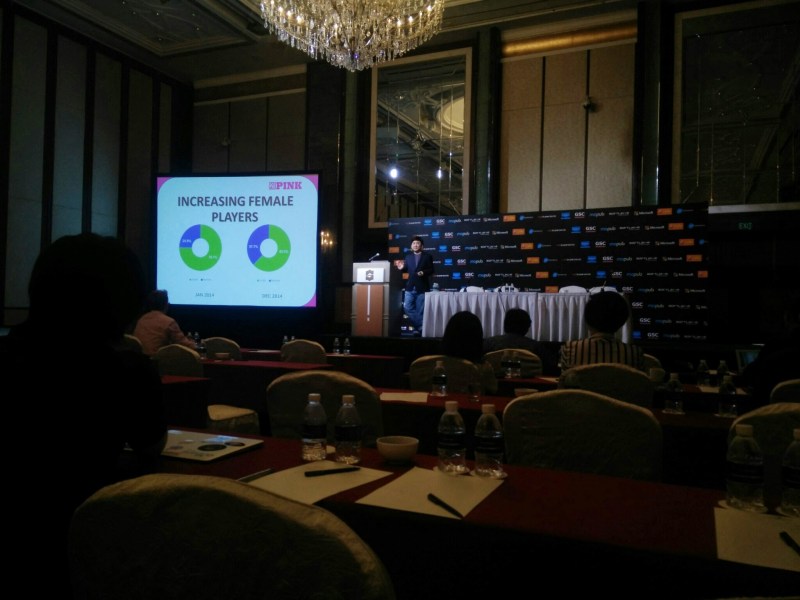 Above: The increase in women gamers in China.

At the start of 2014 in China, women only made up a quarter of the people gaming on mobile. By the end of that year, however, women gamers grew to make up around 38 percent. That’s a lot of people who are still fresh to the mobile scene, and developers could try to latch onto them as it’s less likely that they have hardened gaming tastes.

But at the same time, women are still spending less than men on a per-person average, but NG doesn’t think that is permanent.

“If you target women for e-commerce, they’re already spending more money,” he said. “So maybe the trend could really change in mobile so that they are spending more on virtual items as well.”

Even if developers do take some of this advice, nothing is guaranteed. And China is a gaming market that, while huge, is probably still not worth focusing on for many developers. It’s highly competitive, and even if a game does start making money, the majority of the revenues go to the publisher and the distribution channel.