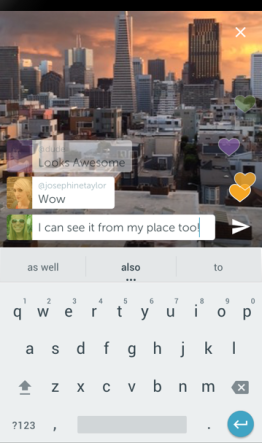 Today’s launch comes a little more than two months after Twitter’s acquisition of the fledgling company behind the app was confirmed, which came shortly before the app launched for iPhone users.

Periscope is all about letting users broadcast what they’re doing in real time to their followers, who can interact by commenting and sharing their appreciation with “hearts.” Once a broadcast has ended, it can still be viewed for the next 24 hours by default, although it can be deleted at any time or saved by the creator to their camera roll.

Periscope for Android actually comes with a handful of unique new features, mainly around notification alerts. For example, when someone you follow on Twitter starts their first ever Periscope broadcast, you’ll be informed. Another, potentially more useful, feature available only on Android is that it lets you continue from where you finished if you have to stop watching a broadcast partway through.

Periscope actually went to market shortly after a very similar app called Meerkat launched, and it was the latter that caused a great deal of buzz initially by making a big impression at South by Southwest (SXSW) in Austin. Meerkat also one-upped Periscope by launching on Android a few weeks back, but with Periscope’s tight integration with Twitter and the massive user-base and financial clout that comes with it, Meerkat will face a mighty uphill battle to remain relevant.