Today EMC announced that it’s acquiring Virtustream, a venture-backed public cloud and cloud software provider, for $1.2 billion. Virtustream isn’t the biggest name in the cloud market, but the important thing here is the considerable upside for EMC, which has long sold expensive storage gear to enterprises and has been slow to jump on the cloud wave.

EMC, founded in 1979 and based in Hopkinton, Mass., hasn’t been growing like bonkers in enterprise technology. But it’s a heavy hitter, with $24.4 billion in revenue in the year ending on Dec. 31, 2014. The company could maneuver itself into a strong position in the growing public cloud infrastructure market, using Virtustream as a starting point.

Virtustream is the latest company in that market to get gobbled up. Other recent acquisitions include GoGrid, bought by Datapipe, and OpenStack-centric Metacloud, bought by Cisco.

And should that happen, EMC could well start to challenge Microsoft, which has been executing on a cloud strategy that puts great emphasis on hybrid architectures as it competes with the likes of Google Cloud Platform and market leader Amazon Web Services, among others.

That’s possible, but it’s not clear if or when that could ever happen if you look at the press release, which summarizes how Virtustream will be served up through EMC and its partners:

Virtustream’s cloud software and Infrastructure-as-a-Service portfolio will be delivered directly to customers and through partners. EMC Federation service provider partners will receive access to Virtustream’s xStream cloud management software platform and be enabled to adopt and deliver their own branded services based upon it.

Presently EMC provides the Federation Enterprise Hybrid Cloud Solution — an on-premise private cloud offering that provides on-ramps to public cloud services such as VMware vCloud Air. Virtustream brings to the EMC portfolio a managed cloud software and services capability — whether on or off premise — which EMC also intends to incorporate into the Federation Enterprise Hybrid Cloud Solution. With the addition of Virtustream, EMC will enable customers to move their entire application portfolio into a cloud environment.

Meanwhile, the effort to make up for lost time in the growing cloud infrastructure market — presumably EMC could have done this deal two or more years ago — could be complicated by EMC’s relationship with VMware, of which EMC (currently) owns a majority stake. 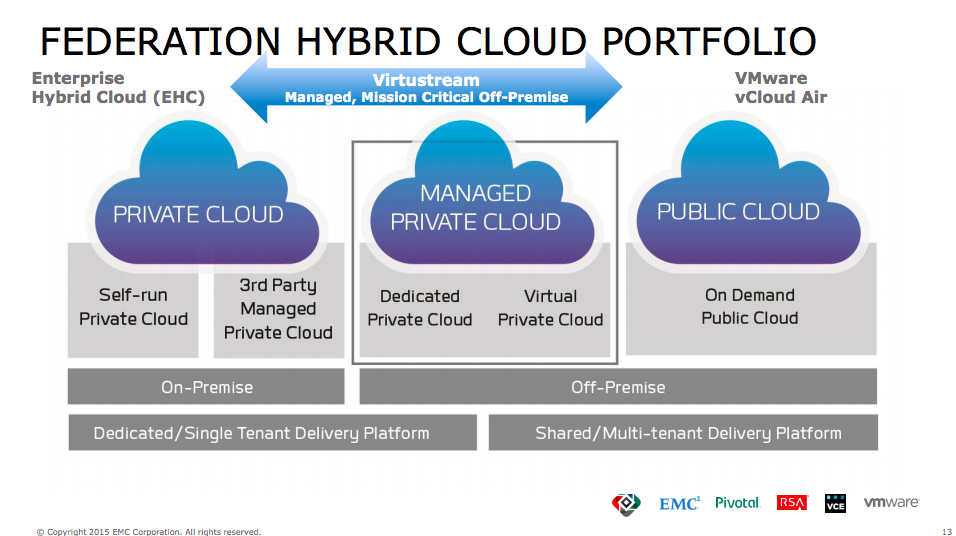 Above: How Virtustream will fit into EMC’s hybrid cloud portfolio

This acquisition is great news for our customers, VMware and the EMC Federation of businesses. With the addition of Virtustream, we will be able to offer customers a comprehensive set of hybrid cloud offerings, including private, managed and public cloud solutions. As we deliver VMware vCloud Air to our customer base to help them continue their journey to the cloud, Virtustream complements and expands our value proposition.

At least Gelsinger is putting a happy face on the news. So does Bill Fathers, executive vice president and general manager of VMware’s cloud services business unit:

The refreshed portfolio will include VMware vCloud Air, the Federation Enterprise Hybrid Cloud solution (based on a combination of EMC and VMware technology), and now a complementary Virtustream managed cloud offering. With this comprehensive hybrid cloud solution, our customers will be able to run any application or workload from the cloud, whether private, managed or public.

Virtustream started in 2009 and was based in Bethesda, Md. It maintains data centers in Washington, Las Vegas, San Francisco, London, Amsterdam, and the Netherlands.

SAP led a $40 million round in Virtustream in 2013. Other investors include Columbia Capital, Intel Capital, Noro-Moseley Partners, QuestMark Partners, and TDF.

Rodney Rogers, chief executive and a cofounder of Virtustream, wrote in a blog post of his own that he and his colleagues “had been preparing to take Virtustream public for about a year now,” with an initial public offering happening in the fourth quarter of this year or the first quarter of next year. But multiple acquisition suitors had emerged — not just EMC.

“We had dialogue with parties we knew well and knew had an interest in us,” Rogers wrote. Which means that Virtustream could have well been in the hands of another company — like SAP — right now.

Only time will tell if EMC will be able to make the most of Virtustream and expand on the startup’s position in the cloud infrastructure market.