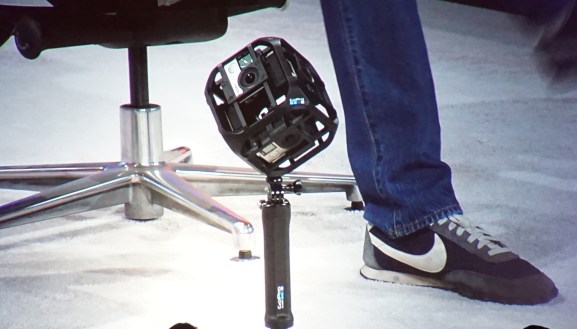 The rig — a sort of cubical framework — holds six GoPro Hero 4 cameras in an arrangement that lets them capture video in all directions simultaneously. The price of these cameras together is about $3,000, Woodson said, plus a yet-to-be-determined price for the rig itself.

Woodman expects the market for this rig to be primarily professionals and prosumers who want to create immersive video for use in virtual reality, such as the Oculus VR.

“We don’t expect the average consumer to purchase 6 GoPros and a spherical mounting rig and go out and capture spherical video — although they will,” said Woodman.

In fact, earlier today, Oculus CEO Brendan Iribe told the crowd here at the Code Conference that VR would need more video content in order to be successful, and that’s the market GoPro is aiming for.

“For VR to be appealing to non-gamers, it’s going to need content,” Woodman said. “GoPro’s positioned better than anybody in the world to provide that kind of content.”

Woodman said the spherical array will be available in the second half of this year. The product shown here is a prototype, so the final product’s appearance may be different.

He also said that the company would be releasing a quadcopter with a camera, although he provided few specifics other than saying it would also be shipping in the second half of the year.