Running for major doesn’t usually involve a lot of shooting.

But gunplay is the main thrust of BunnyLord’s campaign for mayor in Roll 7’s retro-minded, cover-based shooter Not a Hero. Killing crime, to use the time-traveling purple rabbit’s own phrase, is BunnyLord’s final attempt at saving the world from total annihilation. The character, and his odd diction, dominate the story of Not a Hero, and while the gaming industry can boast a lot of repetitive hero designs, time-hopping lupines aren’t among them. I had an email chat with Roll 7 creative John Ribbins to figure out exactly where this out of time rabbit came from, and which came first, the hyper-bloody shooter, or the mayoral candidate with the randomly generated vocabulary.

From NPC to mayoral hopeful 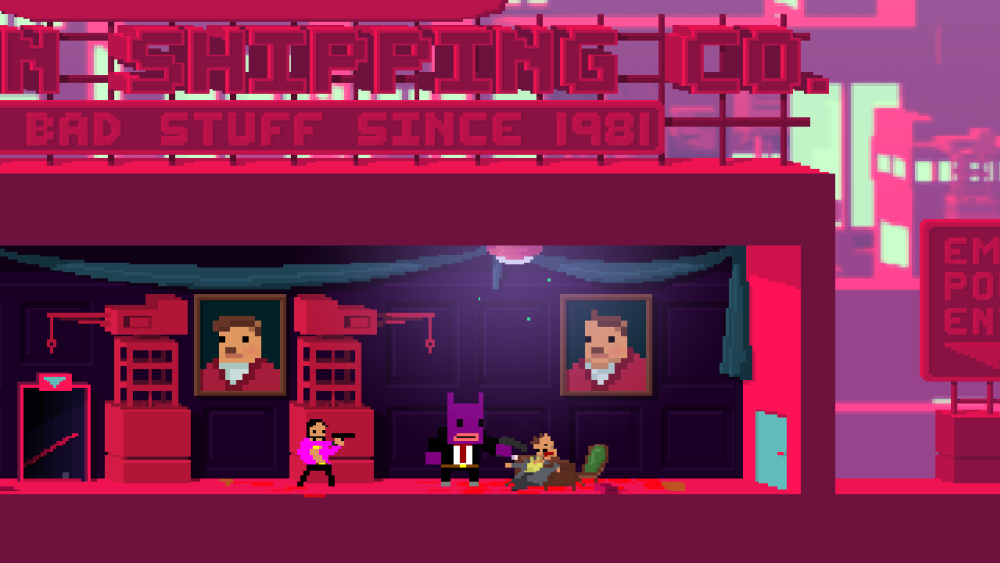 Above: The BunnyLord we know (and love?) first came to be as a chatty NPC in Roll 7’s roguelike prototype Hackathor.

The BunnyLord we know today, including his odd turns of phrase, had much of his start in an earlier game prototype, Hackathor. The role-playing/roguelike hybrid had the future government hopeful as a recurring non-playable character, offering hints or chatting with the player at various points in the game. With Not a Hero, the opportunity to expand on BunnyLord as a character became a chance to poke a little light fun at shooter narratives.

“When we were coming up with a story, we wanted replaying levels to fit in the narrative, hence time travel, and being able to go back to any day you’d already played seemed to make sense,” Ribbins said. “BunnyLord’s attitude is kinda supposed to make fun of shooter game narratives, where [success is invariably measured] by your ability to shoot things. We wanted to make that situation silly. He’s running for mayor- a task that doesn’t normally require guns and murder, but he’s decided that’s the best way to go, so you have to go along with it!”

Going along with it means a lot of pep talks and celebratory, post-mission milkshakes with the time-traveling rabbit. BunnyLord’s conversations come from sentence components pulled randomly from a massive list with each occurrence in each playthrough. So every time you repeat a mission, while BunnyLord won’t suddenly be having sundaes with you instead of milkshakes, he will have a different way to oddly praise you. But as the diction humor fans at Roll 7 found out, consistent comedy is difficult to convey through random variables. 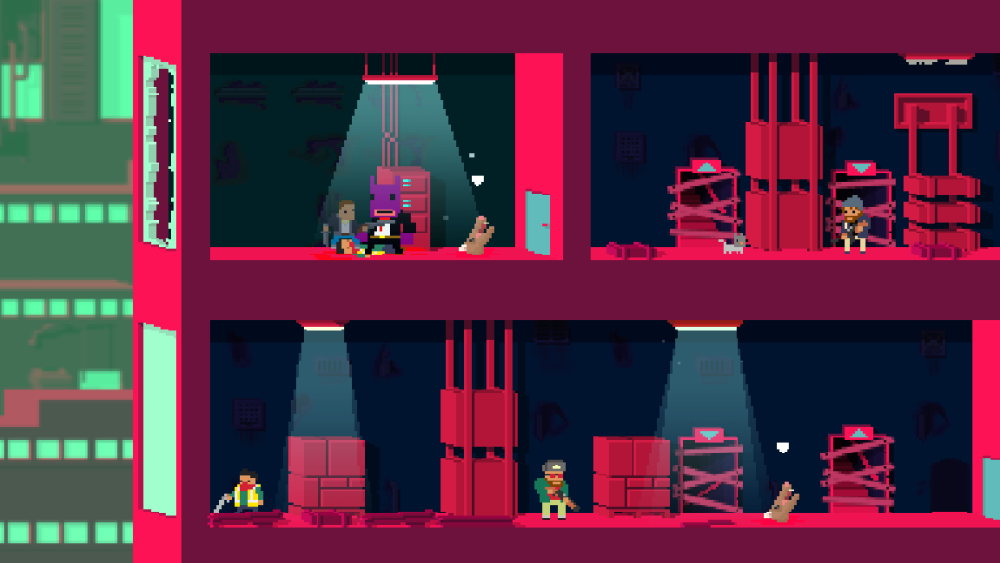 Above: BunnyLord’s random diction comes a surprisingly easy system of referencing giant lists of nouns, adjectives, and such.

“The program to do it is really simple, where you want BunnyLord to say a random noun, you type ‘NOUN’ instead of a word and the code switches that NOUN for a random noun from the list,” said Ribbins. “Through development BunnyLord kind of found his voice, as we watched the cut scenes we kind of cherry picked our favourite random words and that became his voice. It’s supposed to [sound] like he’s been google translated from some alien language. The results are kind of hit and miss admittedly … sometimes it makes no sense, sometimes it quite offensive, sometimes it hilarious. I think that was a risk we knew we were taking, but that’s who BunnyLord is!”

That risk led to one of the driving forces of Not a Hero’s marketing campaign, once Roll 7 brought the shooter to publisher Devolver Digital. Bridging the violence with BunnyLord’s quest for globe-saving bureaucratic power proved one of the stiffest challenges on the project. As Ribbins described it, “I’m a gameplay designer, not a writer, so doing a game with a story was a fun challenge.”

The kind of challenge Ribbins and Roll 7 aren’t unhappy to take a break from for the time being. According to the creative director, BunnyLord’s campaign for mayor has yielded a lot of fan response, but it took more than two full years to set up. So there is no rush at the moment to return to help the time-traveling lupine become President.

“We’ve been workin on Not a Hero as a small team for almost 2.5 years on and off,” Ribbins said. “I love that big purple bastard, but I think for a minute we need a break from gun based politics. It’s been great seeing the reaction to Not a Hero, I think if we do a prequel/sequel/spinoff there’s a lot of things we’d change, but the Not A Hero one is a fun place to do stuff and I’d love to return to it at some point!”

Political campaign slogans can frequently become cultural touchstones, looked upon by future generations as a time capsule of a voting bodies’ values. If hindsight has heralded “I Like Ike!” and “It’s Morning in America!” as clarion calls across the body politic, BunnyLord’s chat of “Kill all Crime!” definitely deserves some recognition. The purple rabbit was born as a chatty NPC, only to time-travel back to be our mayoral savior. But he’ll need to work a bit harder, because he has some key demographics yet to convince.

“Hell no,” said Ribbins, when asked if he would vote for BunnyLord, “That guys policies on animal equality are crazy.”