Batman: Arkham Knight, the final game in the Arkham series, has been a long time coming. The massive title is arriving in stores on June 23, after four years of development. And its arrival could assure Warner Bros. Interactive Entertainment’s dominance of the U.S. market for console games.

Warner Bros. has become the biggest U.S. game publisher for the first time this year thanks to its launches of Dying Light and Mortal Kombat X. The question is whether player still want to “be the Batman,” as Warner’s marketing campaign urges us to be.

I was able to play a near-final version of the long-awaited game at a preview event in Los Angeles and hear dastardly Warner Bros. plan for domination. The dirty secret, according to Warner Bros. game chief David Haddad, is a focus on quality. I know, it’s shameful to talk about quality in an age when it’s so much more fun to talk about free-to-play business models, monetization of engaged users, and programmatic mobile advertising. Yes, indeed, Warner is desperately playing the quality card. I jest, of course. The Batman game will be one of the year’s best, if you like the brutal superhero combat genre.

Highlights from the past 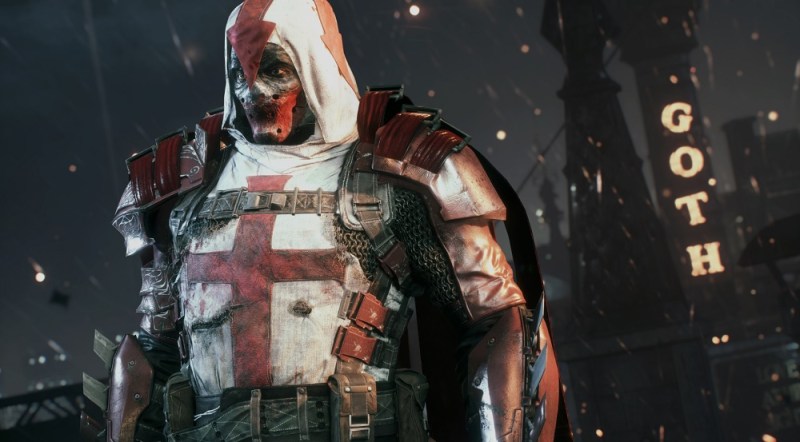 Above: The Arkham Knight.

The Joker was Batman’s nemesis in the previous games, but now we’ve got something else altogether to fight. The bad guys have taken over the city, and we have to clean it up, one broken skull at a time.

We already know from past previews that one of the stars of the game isn’t Batman himself but the Batmobile. You can summon the car via remote control and hop in with style, your cape flowing as you land in the seat. You can drive through the huge city of Gotham to various missions, which you can execute in any order. Last year, we saw a preview where we had to challenge the Arkham Knight, a villainous figure with a huge army behind him, as he took over a dangerous chemical plant.

You could drive fast through the streets with the Batmobile, or convert it into battle mode and scoot around, firing weapons at heavily armored tanks and other enemies. Once you take out the Arkham Knight’s armored forces, you have to perform rescues where you have to outsmart enemies who have taken hostages. You can tap into Batman’s rich array of gadgets to get a height advantage and come smashing down on the hostage takers. Or you can call in the Batmobile remotely to blast away at obstacles the Batman can’t get around. And finally, you have to get into the thick of the fighting, smashing the faces of enemies in brutal hand-to-hand fighting with finishing moves that leave your enemies with lots of broken bones. Rocksteady has refined that hand-to-hand combat and the one-button pushes and combos that trigger awesome animations of Batman’s fluid movements.

Warner Bros. hasn’t said a lot about the story yet, but it promises an epic ending. In the previous games, the super villains were sparring with each other, jockeying for power underneath The Joker. But with the Joker out of the picture, Scarecrow has taken over and united the rogues against Batman.

“In Batman: Arkham Knight, it is very much about the rogue’s gallery being completely united under Scarecrow’s plan to take down the Batman,” said Dax Ginn, marketing manager at Rocksteady Studios, the developer of the game. 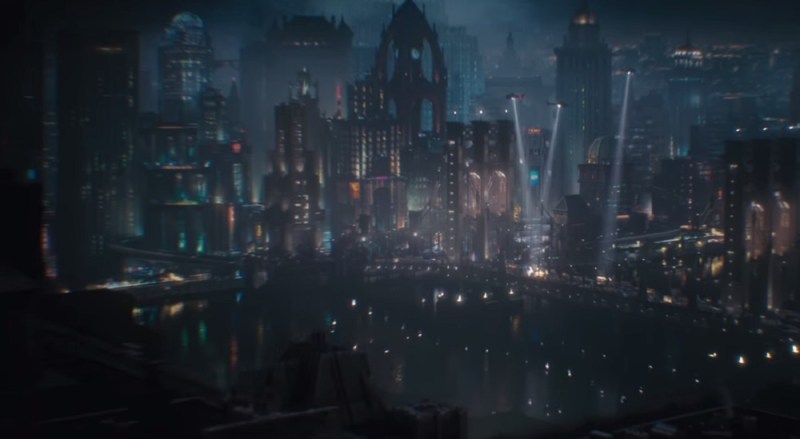 Your first view of Gotham is awe inspiring. At night, the neon lights and realistic lighting and shadows are stunning. The next-generation 3D graphics of this game are pretty amazing.

I started the game at the top of a building, and I proceeded to jump off. You can coast around in circles like a bird of prey, figure out where you want to go, and then slam into the spot with an enemy for a quick takedown. You have to scan around for clues and missions, and then set waypoints to find your destination. You can fly or drive the Batmobile through the vast open world. When you want to go back up, you can use Batman’s handy grappling hook to pull you up to the top of a building in seconds. You can feel Batman’s sprawling cape flutter in the wind.

In past games, the quality of the graphics melted away when you got into the hot-and-heavy action. The cinematics were always better than the animated gameplay. But with this generation, the game cinematics are in-engine, and the action doesn’t slow down just to show you a pretty picture. You get a great feeling of the power of the Batman.

“It was kind of to evolve that experience, to create the ultimate Batman simulator,” said Guy Perkins, marketing manager at Rocksteady. “We wanted to give players that feeling that they were Batman at the peak of his powers, ruling the streets of Gotham, and coming head to head with this ultimate threat in the form of Scarecrow and the Arkham Knight.”

In the first mission, I had to rescue firefighters who were fighting fires set across the city by Scarecrow’s henchman, Firefly. The firefighters were being taken hostage. I tracked down one of them and got into a brawl. The sound is awesome, adding to the brutality of the fighting as you deliver bone-crunching blows. Once I took out the bad guys, I rescued the firefighter and moved on to the next location.

That happened to be a lair where the Penguin was laying an ambush. On the way, in the Batmobile, I had to pursue a vehicle in a high-speed chase and take it out. It felt like I drove all over Gotham in the process, but I never noticed if I was driving by the same places. Gotham is vast.

At Penguin’s lair, I had to make my way up a tall building and then drop down on a big party. It was like jumping into a middle of a prison riot, but Nightwing helped me. I had to be careful and take out the enemies with finishing moves, since there were more than enough to take me down. 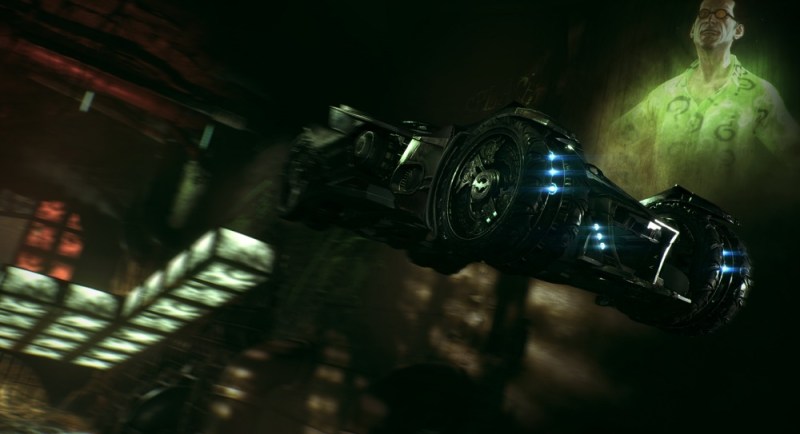 Another mission had me going underground in the Batmobile. I was driving through an absurdly large network of sewage tunnels in pursuit of the Riddler. I was trapped in a kind of endless race track where the Riddler set up obstacles. As I approached those obstacles in the speeding Batmobile, I had to press a button to open a gate or extend a runway instantly to make a death-defying jump. All the while I had to step on the gas because I was under a time deadline. During that mission, I had to learn how to drive the Batmobile for real, making sure I gave it enough power to drive on the walls and still have a chance to maneuver. It was a very difficult mission to get right. So, of course, hardcore gamers are going to like it. It’s no matter that there is no way the Riddler could secretly build such a large underground race track beneath the city. 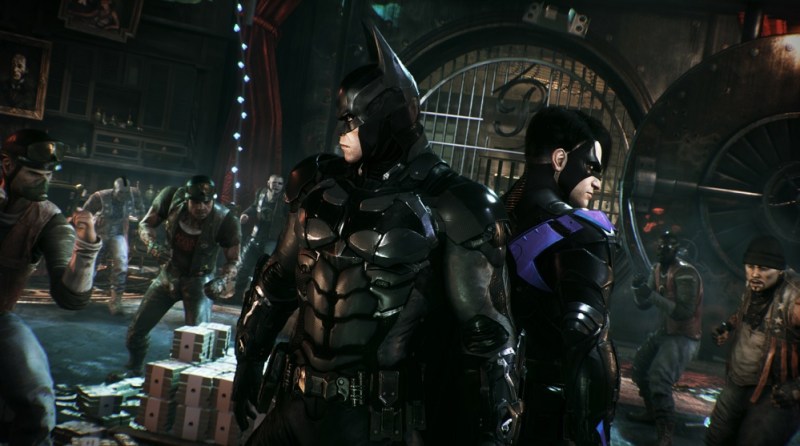 Above: Batman and Nightwing fight off the Penguin’s thugs.

Batman: Arkham Knight is going to be a really cool game that hardcore gamers are going to love. I’m not sure if it’s going to rope in fans who didn’t play the previous games or recruit brand new players. But the hype around this game still appears to be justified. Thanks to the rendering powers of the modern PC and the PlayStation 4 and Xbox One, Gotham finally feels like an immense, real city.

I know I’ve only seen a small slice of the whole, and just what Warner wants me to see. But the brutality of Batman’s vigilantism and vengeance comes through. I hope the game turns out to be awesome. We’ll find out for real in just about a month.