The retail business is still a good one for the world’s largest seller for game-related products.

GameStop reported that it generated $2.06 billion in revenues in the first quarter of its fiscal 2016. That beat its guidance of $2.01 billion, and it’s also up 3.5 percent year over year. The company also got a huge win in its earnings at 68 cents per share compared to expectations of 59 cents per share. Those big numbers, which Wall Street wasn’t expecting, has GameStop’s stock price up more than 5 percent to $43.10 in after-hours trading. 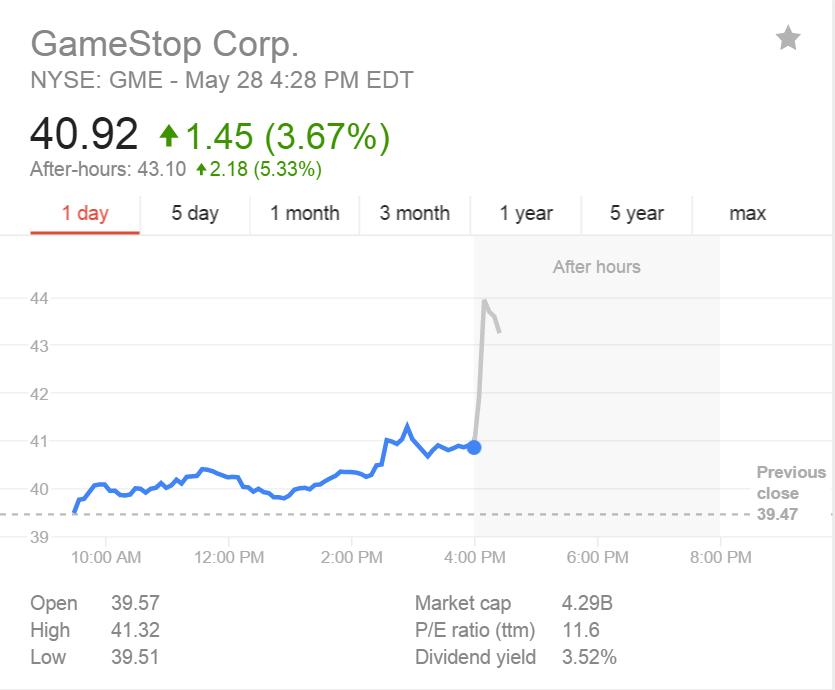 In a statement provided to investors, GameStop chief executive officer Paul Raines said that the company’s performance is evidence that they are on the right track. Specifically, he highlights the choice “to transform GameStop into a family of specialty brands” to “drive durable revenues and shareholder value.”

This refers to GameStop’s efforts to position itself as the top outlet for gamers looking to pick up hardware and software, which is something it has accomplished as consumers continue to flock to the retailer to pick up Xbox One and PlayStation 4 systems and games. But Raines is also talking about diversifying GameStop into the mobile phone, tablet, and computer markets with its AT&T-linked Spring Mobile stores as well as Cricket smartphone locations and Simply Mac Apple stores.

Looking ahead, GameStop is expecting its Q1 success to fuel momentum through the rest of fiscal 2016. It is predicting to generate earnings of 21 cents to 25 cents in the next quarter, which is the slower season for gaming. It is also raising its full-year guidance from the $3.60-to-$3.80 range to $3.63-to-$3.83. It also expects full year sales for comparable stores to grow between 1 percent and 6 percent.

All of this comes as industry onlookers continue to suggest GameStop’s days are numbered as more gamers turn to digital downloads. At this point, especially on consoles like Xbox One and PlayStation 4, around 15-to-20 percent of consumers buy their software directly through online stores like Xbox Live. That’s up from around 10 percent on the Xbox 360 and PlayStation 3. But even with that number growing, GameStop isn’t getting left behind because it has shifted its business to accommodate digital sales. It has trained its in-store associates to push downloadable content and season passes for games on consumers, and that’s working.