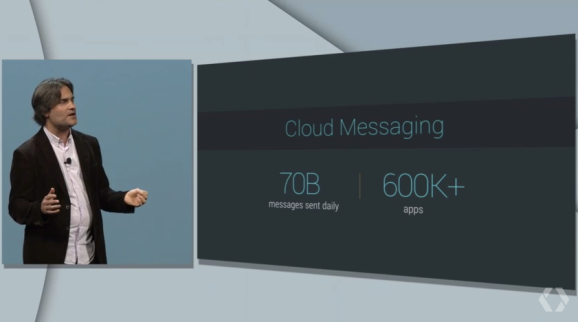 Jason Titus, head of the developer product group, talks about Cloud Messaging improvements at the 2015 Google I/O conference in San Francisco on May 28.

Developers just upload apps and then use Cloud Test Lab to run tests across the top Android devices around the world. The service provides screen videos and crash logs.

It will be available “soon,” Jason Titus, head of Google’s developer product group, told the crowd.

Today’s updates aren’t enormous, but they could make Google Cloud Platform a more comfortable place for apps of different types.

What’s more, Google has gone out of its way to bring cloud infrastructure pricing closer to the trajectory of Moore’s law — a key concept in the microprocessor industry stipulating that the number of transistors on a chip doubles every two years, and thereby cost less than its competitors.