RANCHO PALOS VERDES, Calif. — A photo-sharing company, Lyve Minds, is announcing a small, puck-shaped camera that can sit in the middle of a party, snapping photos of the action and automatically syncing them to a shared photo gallery.

The Lyve Cam shoots 13-megapixel still images and video at up to 4K resolution. It contains 32GB of storage and connects with your network via Wi-Fi.

It’s intended for people who want to capture video or photos of events without having to obtrusively hold up a camera from moment to moment.

There’s a tripod mount, or it can just rest on a table or shelf nearby to record the action at a party or other event. You can set it to automatically shoot photos and upload them at regular intervals to a shared online photo album, called Lyve Mix. 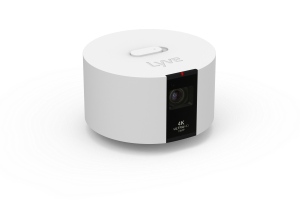 CEO Tim Bucher gave an example of how a camera like this could be useful by referring to a recent birthday party for his daughter.

“I found myself holding a birthday cake with burning candles and singing ‘Happy Birthday’ while holding a smartphone,” Bucher said.

With multiple Lyve Cams, you could have multiple views of an event, all streaming to a shared album at the same time, and without having to take out your phone.

Since the camera is so small — about the size of two hockey pucks stacked together — it’s unobtrusive. That means it might also be used somewhat surreptitiously, to monitor a location or stealthily catch photos of a scene. Bucher downplayed that use case.

It has a wide angle view, about 110 degrees, which Bucher said is “between a smartphone and a GoPro” in terms of field of view. The device doesn’t rotate, but he envisions this as a future feature.

The company hasn’t announced pricing for the device yet, but said that unlimited online photo and video storage will be included with the purchase price. The company plans to deliver the camera in the fall.

Lyve Minds Inc. is funded by private investors and Seagate, and has not disclosed its total funding. It is based in Cupertino, California.