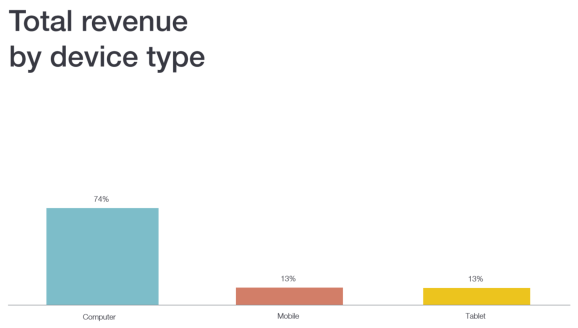 New research from Skimlinks, which took in data from 15 months of commerce-related content, shows that nearly three quarters of all purchases measured are made using desktop and laptop devices, rather than smartphones and tablets.

In a world where everyone from web designers to search-engine giants like Google is telling you to deliver your websites and online experiences on mobile as a priority, it seems that the most important interaction of all is still happening on the computer.

Commerce-related content — or “comtent,” as Skimlinks like to call it — describes content designed for the sole purpose of generating revenue, such as buying guides, product reviews, “get the look” articles, vouchers, deals, sales, and product or service-focused list articles.

So why are consumers moving to the computer when it comes time to purchase a product?

“It is likely that the users of those mobile and tablet devices did go on to purchase the products in the comtent they browsed, but on other devices or during subsequent browsing sessions, and as such, the limitations of cross-device tracking and cookie-persistence on mobile devices affect the overall performance numbers,” Alicia Navarro, CEO and founder of Skimlinks, told me. “The way people shop online still favors desktops for completing purchases, but mobile and tablet devices for browsing and inspiration, so until industry-wide cross-device attribution systems are adopted, mobile will be seen to underperform when it comes to conversions compared to desktop.”

The study also delves into which type of comtent performs well over time, and the results are a little surprising.

Despite the obvious and immediate boost a new article or blog post receives on first publish, most types of comtent continue to generate traffic, and revenue, for months to come.

This is in part due to publishers updating existing buying guides and gift guides with new entries, keeping them fresh and relevant for months at a time. Gear Patrol, one of the publishers highlighted in the report, saw a 22 percent increase in conversion rates and a 92 percent increase in affiliate revenue by adopting this “post and refresh” methodology.

Of the various types of commerce-related content examined in the study, it is clear that “get the look” articles and deals appear to perform best for traffic over time. What does this say about the audience and the triggers that cause people to click, then buy?

The study took in data from 2,200 pages across 15 months to determine how comtent performs. While gift guides and “get the look” content perform extraordinarily well from a traffic perspective over time, they are both in the minority when it comes to the type of content produced by publishers that want to generate affiliate revenues and commissions.

Thirty-eight percent of comtent is in the “deals and sales” category, and 25 percent is product reviews. Despite the strong traffic, gift guides make up only 3 percent of the content in the study. The reason? It appears that gift guides trail off quickly when it comes to generating commissions, which could be why they aren’t as popular.

“Gift guides tend to be more seasonal in nature, so are more timely than timeless,” Navarro said. “They also tend to be sources of inspiration and ideation, and as such, don’t benefit from bottom-of-the funnel monetization methods, which reward more immediate calls to action.”

The full study, which goes into depth on comtent lifecycles, popularity, revenue, commissions, and device types, is available now from the Skimlinks website.