Amplitude Studios is one its way to becoming one of the more respected names in 4X (explore, expand, exploit, exterminate) strategy-game development.

Founded in 2011, the French game company has already released three games under its “Endless” series: the Endless Space, the fantasy-themed Endless Legend, and the roguelike Dungeon of the Endless. All three of these games have links to the other when it comes to their worlds and narratives, something that few strategy-game makers have ever attempted.

CEO Mathieu Girard and creative director/chief operating officer Romain de Waubert discussed with GamesBeat the design philosophy behind their games, the French game-development scene, and how Amplitude formed and came to be,

Here is part one. Click here for part two.

GamesBeat: How did you pick the name “Amplitude” for your studio?

Mathieu Girard: Actually, it was a long search. We had lots of ideas for crazy names, sci-fi names, funny names. Amplitude was a good choice to most people. It evokes the magnitude of the games we want to make as far as scope, depth, and duration. It felt consistent with what we wanted to do as far as games. Also it’s a name that’s easy to pronounce, to spell, and to understand in English and French. It was a good fit for us.

Romain de Waubert: It was very positive. That was why we liked it. The choices we had were things like “Black River” and “Death Blood” and whatever. Like, what? The beginning was a bit weird. They weren’t very good video gaming names.

GB: What was the craziest one?

De Waubert: The most awful was Black something, Dark something. …

Girard: There were some zombie-related names, some alien names. We tend to forget those kind of embarrassing things.

De Waubert: Yeah. All we remember is Amplitude now.

GB: When you started, how many people did you have? 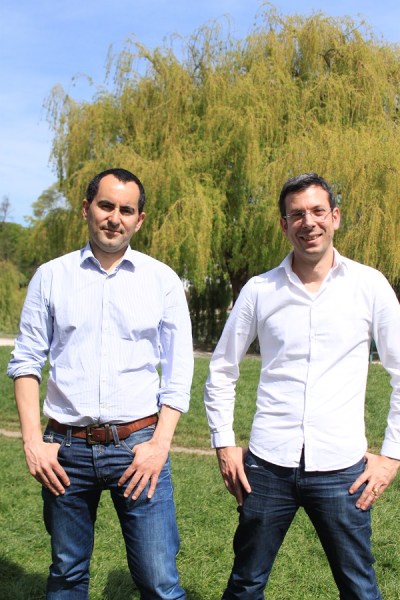 Image Credit: Amplitude Studios
Girard: We started as just the two of us, Romain and myself. We worked on Endless Space in the garage with Unity and design documents. We did a proof-of-concept for the game together. Then the team grew as we entered our first offices. We started up when the company was really operational with 11 people. We have 43 now at last count, counting us.

GB: How did you settle on the name “Endless” for all your games?

De Waubert: One thing with us, most of our decisions are very collegial. We make them together. We do a lot of brainstorming. That one came, I think, from a marketing guy, who also happened to be a designer on Endless Space and other games. That’s something unique to Amplitude. We knew we had a race of people in the game that we wanted to call the Endless, but we didn’t dare to put that name on the box. At the same time, between me and Mathieu, we knew we wanted to make games that would be huge, highly replayable, and suddenly the Endless part made sense. It would be a great name to show off not only the universe, but the type of games we do. That’s why we came to like it.

GB: One of the things I liked about you guys is that all of your games fit together as a narrative in some way. What led you to do that?

De Waubert: One thing that we wanted to do was to create a universe with Endless Space. It wasn’t all about you starting out on Earth and you have to discover the stars. We wanted to dream a bit more, to create something a bit more magical. We liked the idea of thinking about these other races, what they would wear, what their motivations would be. When we went outside Endless Space and started working on Legend, our second game — originally it wasn’t meant to be in the Endless Space universe. It was just meant to be a new universe. But we looked at the Endless Space universe and felt like we’d only barely scratched the surface with the first game. We wanted to do more in that universe. That’s why, pretty early on in Endless Legend, we decided to stay with the same universe and imagine that this all happens with one planet. The weird thing is, it became not just fantasy but fantasy with a touch of science fiction.

We loved that idea.

One thing we forced ourselves to do at the beginning of development, when we conceived the story, was imagining that it was only fantasy. The player, as a person living on the planet, would imagine that they only lived in a fantasy universe. But as the game goes on, you discover more of your universe, your planet, your history. Then you suddenly realize that you’re part of more than just this fantasy universe, that science is a part of the universe as well. We loved that idea. Then it all fit together with Endless Space.

To get back to Dungeon, it was an accident. It was a game that was never meant to be. We wanted to find a good way to link Legend, the fantasy universe, and Space, the science-fiction universe. When we came up with the idea for Dungeon, we thought that would be a great way to link the two universes, and for people who played it to discover both games and the whole universe. It could bring new players to discover our other games.

GB: I’m fascinated with Dungeon and how it fits in the structure of the other two games. How did you decide to do it as a roguelike dungeon crawl?

Girard: We’ve told this story a couple of times. It’s a bit sad to admit, but it was actually an evening of drinking. That’s how it all started. Way too much booze.

Girard: The night housekeeper saw all the empty bottles in a stash somewhere. She was horrified by the quantity of alcohol we were drinking. But that was really the sum of everything we’d drunk for years. We don’t drink that much. 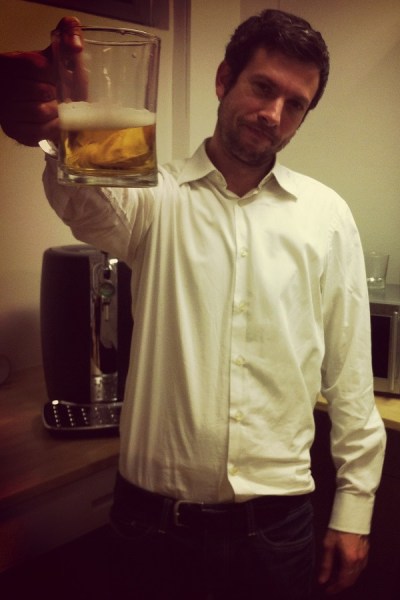 Above: Romain de Waubert hoists a glass. Beer played a role in Dungeon of the Endless’s creation.

De Waubert: What we do every couple of months is something called “beer-together.” We not only have the studio gathering to have a drink, but we invite people from the community and from other game developers in Paris to join us.

Girard: We’ve had some people from overseas as well, from the USA. It’s a good excuse to have some drinks.

De Waubert: And we talk about our next games. That’s how it all started, to come back to your original question. It was one of these evenings where you have all these creative minds mixed together, drinking, relaxing. At the time we were playing a lot of FTL and Desktop Dungeons. We thought, aw man, if we were to make our own roguelike, that would be how we’d make it. We were bouncing all these ideas around. The very first thing that came up was, if we were going to make a two-player roguelike, I’d love to—when I explore the dungeon, I can make it mine, and then I can defend it against the inhabitants. I’d have to move forward, never stop. I’d have to explore and go deeper and then defend it, using the dungeon as a defense against the other inhabitants. We loved that pitch, basically. This got started on a Friday night, and then over the weekend everyone contributed to that idea. We all went home and worked on the pitch, and when we got back on Monday we all had a part of the pitch. One of us had a demo he did in Unity. Another one had a few documents taken down in Word. Another one had some drawings. It was awesome. We’d all put together a part of the game. On Wednesday we met with Mathieu and said, what do you think of that? He liked it, obviously, and told us to keep going.

Girard: It’s funny, because the ideas connecting the two games started more as a companion app, a way of promoting Endless Legend. Then it evolved into a full-fledged game, thanks to this eventful evening.