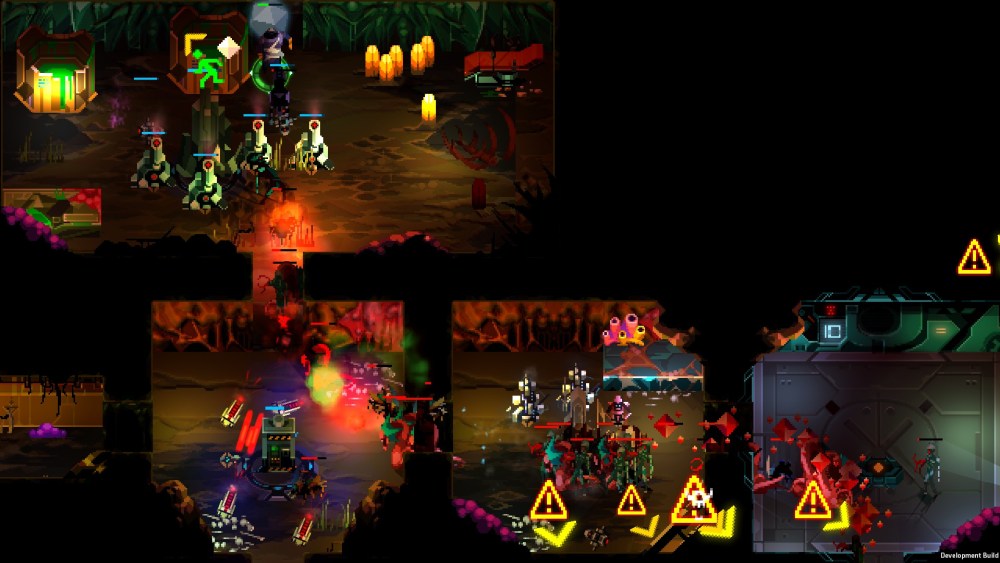 Above: Dungeon of the Endless looks crazy in its late game.

De Waubert: We were happy to see how agile we were. Full production started a month or two after that.

Girard: We hired a new team, which is still working on the game and its evolutions right now.

De Waubert: Also, we’re working on — The game was interesting, because it allowed us to branch out to new platforms. We’ve announced an Xbox One version, which will come out this summer. We may have some other stuff. I don’t think it’s official yet, but we’re working on an iPad version as well.

Girard: That was part of the original idea from the beginning.

De Waubert: Originally we were designing the game only on the pad, or only on touch I should say. But we know Steam and the PC better. We got it to work with a mouse, and now we’ve been working back to the touch version.

Girard: Porting it to the iPad isn’t as easy as it sounds, because we had a lot of performance issues. The game is very large. It has lots of lighting effects, complex shadows and so on, particles. We’re trying to make sure it’s a great experience to play on the iPad.

GB: Did you use Unity for Dungeon?

Girard: Yes, for all our games so far.

GB: I know some people think that porting to the iPad through Unity is an easy thing, but I’ve found that it’s not as easy as people make it out to be.

Girard: It’s easy to make it run, but to have the right performance, to make sure everything fits into memory, you have to do a lot of work on your assets and performance. We had to rewrite the whole rendering and shadowing engine with special code to achieve that. It turned out to be a lot more complex than we initially thought. If we had to redevelop everything in a new engine for the iPad, though, it would be much more complicated. We’re looking to get it out this year, hopefully, if all goes well.

GB: When you noted that you were thinking about the iPad first, did you think of some scenario where people would have this game running on their iPad, and then have Endless Space or Endless Legend running on their PC at the same time? Would there be some sort of interaction between them?

De Waubert: No, we never thought of that. Then you’d need four hands to play it all. But as Mathieu was hinting toward, we were initially thinking more about a companion app for Endless Space or Endless Legend. The interaction could have been more involved in that vision of the game. But as Dungeon moved forward to become a full-fledged game, you didn’t need another game to play with it. 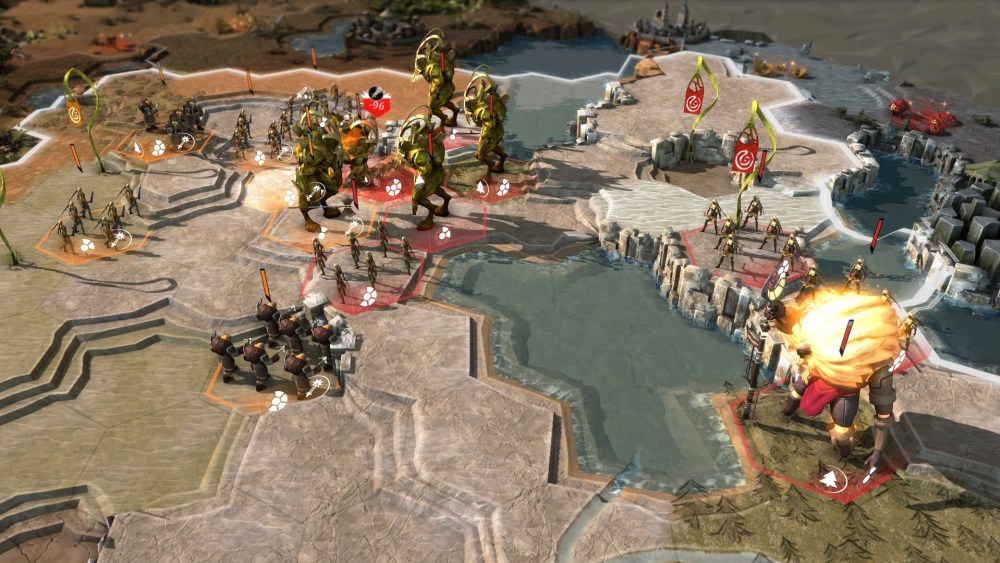 GB: Can you give us a ballpark as far as how many copies of your games you’ve sold over the years?

Girard: We just had a great free weekend. I don’t have all the figures, but what we announced before was almost 800,000 copies for Endless Space, more than 400,000 for Endless Legend — maybe even more now — and a bit under 300,000 for Dungeon of the Endless. It’s about 1.5 million altogether. We hope to reach 2 million by the end of the year.

GB: When you launched Endless Space, did you envision you’d be hitting that at this point? Are you more successful than you thought you’d be?

Girard: When we made our first business plan we were hoping to sell 63,000 copies of Endless Space. The company was viable with that much. To some of the people we discussed our business plan with, though, that sounded a bit optimistic. We’re happy to have sold more than that 63,000.

GB: Have you been self-funded since you started, or did you get some backing from elsewhere?

Girard: It depends on what you call self-funded. We had investors in the company, but most of them were friends and family. Then we had a few government grants to help improve the quality of our games. We didn’t need to get them, but once we had them it allowed us to give Endless Space the polish it needed to be a great game.

GB: When you accepted those grants, were there any strings attached?

Girard: Basically, we had to release the game. That was one of the conditions. But there aren’t too many, usually. There’s a committee that grants the subsidy, and once you’re greenlighted you can use it to make the game. You have to release as promised, but it’s not too constraining. Obviously they don’t want to make games with pornographic content or anything like that, and you might run into some trouble if you make something too violent, but other than that it’s easy to use.

De Waubert: We have a lot of different ways to help game developers in France. In this case, the amount was 200,000 euros.

Girard: Which was a fourth of the budget for the development of Endless Space. It was a nice share of the pie. I guess you can find that kind of financing in Montreal as well in the form of a tax credit. But France is a good environment to start a game company.

De Waubert: Financially it’s very interesting. We didn’t expect all that. We thought it would be impossible. It was very nice on our end.

Girard: The only catch is that once your company gets bigger, it gets less interesting.