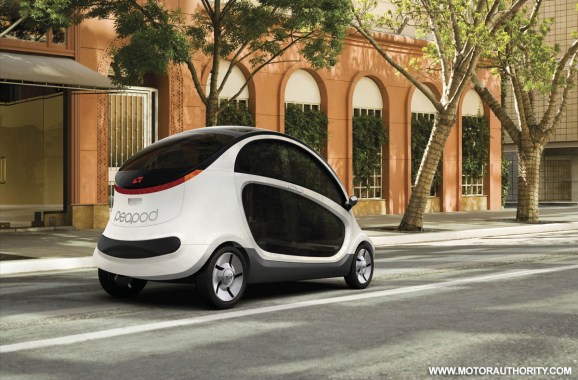 Friday’s the day we use for the stranger and more oddball stories in our lineup, and one of the more unusual we’ve seen in a while comes from Harvard University.

It’s an article — actually a handful of articles — covering research by a scholar of “disruption” who argues that Silicon Valley startup carmaker Tesla Motors isn’t disruptive.

Instead, he suggests, the truly impactful electric cars will be tiny, low-speed urban vehicles.

The Tesla Model S is only an “incremental” improvement on what’s already out there, he said.

Written by Thomas Bartman, who studies disruptive innovation at a Harvard Business School think tank, the story appeared two weeks ago in the usually august Harvard Business Review (via Gizmodo).

It contains links to other HBR stories, including a feature in the May 2015 issue in which Bartman’s research on disruption and Tesla Motors is covered in some detail.

Bartman concludes that “Tesla is not a disrupter” but rather “a classic ‘sustaining innovation’ — a product that … offers incrementally better performance at a higher price.”

What Tesla actually means to the auto industry is a worthwhile topic for discussion, one that’s clearly being had these days in the boardrooms of every global automaker.

Bartman suggests that the actual disruptive innovation for electric drivetrains will be low-speed electric vehicles and electric utility vehicles.

Both are now sold for specific uses, often not on public roads, by companies such as GEM (previously owned by Chrysler, now owned by Polaris).

He cites the emission-free nature of electric utility vehicles, and the increasingly crowded streets of major cities, as the reasons such vehicles will become more and more popular.

That’s possible, although he appears to ignore the fact that such vehicles have virtually no safety requirements.

In other words, even at New York City’s maximum street speed limit of 25 miles per hour, you would NOT want to be in one that gets hit in an intersection.

Over the longer term — in 2030 and later, roughly the year in which full autonomy is expected by analysts to arrive for mass-market vehicles — it’s possible that small self-driving urban pods will replace cars in some city uses.

And that could change the face not so much of North American and European cities, but the emerging megacities of China — a nation whose citizens have decades of increasing car adoption ahead of them.

In North America, however, we still take highway trips. Low-speed electric vehicles are irrelevant to that task.

And we suspect that Tesla Motors has been somewhat more disruptive to the auto industry we cover daily than Bartman seems to appreciate.

Would General Motors have launched its 2011 Chevy Volt, or announced a 200-mile Chevy Bolt EV battery-electric car, if Tesla had never existed?

Would every German maker be planning a 250-mile battery-electric luxury vehicle right now without Tesla?

Would auto-dealer groups have mobilized their lobbyists throughout the 50 states to get laws changed to ban online direct sales of cars if Tesla hadn’t launched without franchised dealerships?

Perhaps it depends how Bartman defines “disruption,” but to the global auto industry, those items seem pretty disruptive indeed.