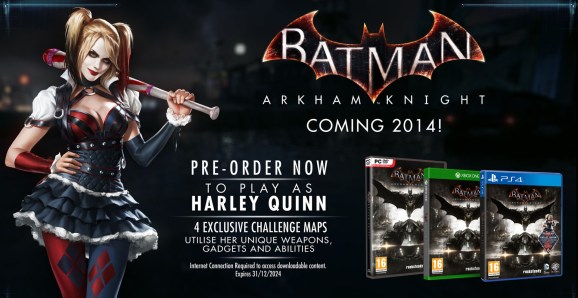 As we near Rocksteady’s latest Batman: Arkham Knight’s release date – a flurry of trailer and gameplay videos – plus preorder deals are surfacing – particularly since we’re edging up on E3 2015. While console gamers of the game are subjected to many different preorder bonuses based on retailer they purchase from, PC gamers have it slightly easier given all digital retailers have essentially the same pre-order bonuses.

Bargain hunters also get an extra incentive this weekend in the form of a preorder discount at up to 46% for Arkham Knight, depending on the edition you purchase from digital retailer Green Man Gaming.

Preorder deals available as of writing:

Premium Edition comes bundled with Season Pass, which currently has a list price of $39.99.

Note: some caveats on the discount code listed above. First, you must make sure your GMG account has email subscription enabled in account profile. Plus, in order to avoid an “Unable to add voucher” error during checkout, you’ll need to fill in your address in the account profile too. This should solve most people’s problem.

All of the retailers listed above are giving Steam produce code of the game (just launch your client, click on add game, insert code and you’re set). Because of this, they all come with the standard preorder bonus of playing as Harley Quinn in its special story pack DLC.

Astute readers will note that the Premium Edition gets the most percentage in discount (from its expensive $99.99 list price). This is because all digital version pre-orders already includes a 10% discount, stacking the previously mentioned 40% off nets you a combined 46% off.

In terms of console deals, there’s not much on the market right now but you do get some extra bonuses if you decide to buy from Best Buy or Microsoft Store.

For Microsoft Store’s special deal on release day delivery, you’ll need to order before 2PM PDT on June 19th in order to get the game in-time for the June 23rd release date. This is a pretty decent offer considering you won’t have to fight any crowds to grab the game on day 1. The special catch being that you’ll have to live in an area with overnight delivery available (rural Alaska is out of luck).

For Best Buy’s pre-order bonus on Arkham Knight (which is also available on other platforms), you’ll need to sign up for a My Best Buy reward account, which you can do so here.

If you’ve found other deals not listed above, let us know in the comments and we’ll investigate if its an authorized retailer and add it to the list!