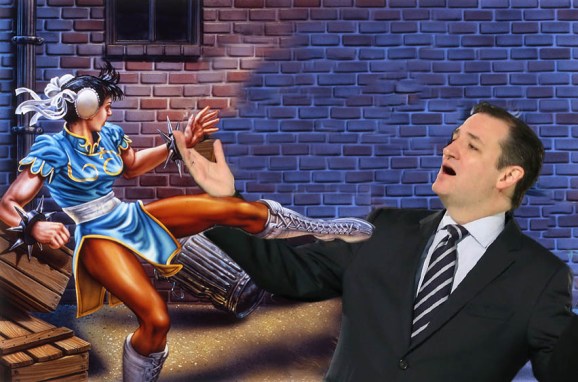 Texas Senator Ted Cruz wants to be the first U.S. president who grew up playing games.

We’re still 600 days away from swearing in a new president of the United States, but that’s not stopping candidates from looking for any edge they can find in their campaigns.

That includes Republican Party presidential hopeful Sen. Ted Cruz (Texas) trying to improve his appeal by talking up his love of video games in an interview with The Daily Beast. The far-right Tea Party conservative said that he’s playing Plants vs. Zombies for his smartphone along with Candy Crush Saga, but he actually grew up playing stuff a lot more hardcore than that.

Cruz was even a huge gamer through his time in college in the early 1990s. That’s when his roommate says they spent time playing Super Mario Bros. and fighting games like Street Fighter II. But the senator doesn’t play on consoles or PC these days, but that doesn’t mean he is no longer a fan.

“I don’t have a console mostly as a time-management tool,” said Cruz. “Because if I had one, I would use it far too much.”

Cruz went on to say that he uses smartphone and tablet titles as a way to connect with his daughters, but it’s clear that this is also one of the ways he is trying to connect with voters as well. He is well known for giving canned, well-rehearsed answers to questions. That has caused many to question how sincere he is or whether he is always a calculating politician.

By coming out and establishing himself as someone who grew up playing games, he could endear himself to young people. At least, to those young people who don’t know that he doesn’t understand net neutrality or that he compared President Barack Obama to Adolf Hitler for passing the Affordable Care Act.

But hey — he might know what a shoryuken is.