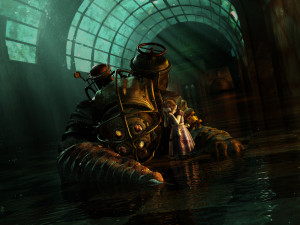 BioShock is a big daddy.

Take-Two CEO Strauss Zelnick revealed some of the sales data for the console and PC BioShock franchise at the Technology, Media, & Telecom Conference in New York today. The first-person shooter series has sold more than 25 million games, according to Gamespot. The latest in the series, Irrational Games’ BioShock Infinite, sold around 11 million copies on its own, making it the most popular entry in the franchise.

Zelnick said that the franchise is “a really important intellectual property for the company” and its parent, 2K Games. BioShock debuted in 2007, and its most popular game, BioShock Infinite, released in 2013 on PlayStation 3, Xbox 360, and PC. But Irrational Games dissolved last year, with its head, Ken Levine, going on to create a new studio. 2K Marin, the creators of BioShock 2, will developer further games in the franchise.

In the past, Zelnick has said that BioShock still has “a lot of upside” and that it hasn’t “necessarily been realized yet,” though he noted today that he has no announcements to make. But given that the BioShock series has generated more than $500 million in revenue for Take-Two, a sequel is likely.