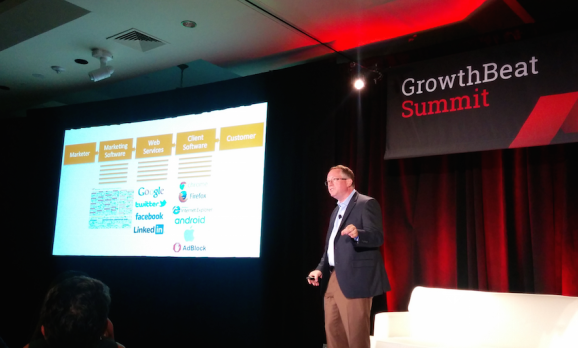 BOSTON — “I didn’t set out to scare the beejeezus out of everything.”

Brinker, cofounder and CTO of interactive content provider Ion Interactive, is better known as the blogger behind ChiefMartec.com — and the creator of a depiction of the current marketing tech landscape that looks like a Hieronymus Bosch depiction of Hell.

When he began the landscape in August 2011, the universe of marketing tech companies was about 100. Now, it’s over 2,000 companies and counting. He’s broken it down into dozens of different segments, but frankly, it’s a big, daunting mess.

Don’t blame Brinker, though: His chart reflects the complexity, growth, excess, and redundancy of the marketing tech industry. Above: The Marketing Technology Landscape, January 2015. (Click for full-size version.)

And it’s continuing to grow. Brinker noted that even a relatively new category of interactive content, where Ion Interactive resides, already has more than 70 different players.

What’s behind this explosion?

It’s a convergence of several factors, he said. Marketing now includes more products, more channels (like smartwatches), and more ways to build and adopt software. Plus, there’s the fact that marketing tech companies are well-funded, with more than $30 billion in investment expected by 2018.

But, Brinker told the audience, “the tech is a distraction.” The key driver is that marketing itself is changing “in fundamental ways.”

It began as a “business of communications,” whose central skill was copywriting, he said. Now it’s become the “business of experience,” where the marketer is addressing the customer throughout the entire “journey”: browsing, considering a purchase, making a purchase, using the product, and then (hopefully) coming back for more purchases.

The technology, he noted, is defined by the story.

In his welcoming remarks, VentureBeat CEO Matt Marshall had pointed out that the modern chief marketing officer needs to be the one in charge of a company’s story.

And the storytelling now includes code, Brinker said. The software, usability, interaction, configurations, how algorithms make their judgments — it’s all part of the marketing tech story.

“In a digital world,” he said, “software is your hands and eyes.”

Given all that, Brinker’s labyrinthine depiction of the landscape seems almost spare.