You can’t download a pizza cutter shaped like the Starship Enterprise from Star Trek, and that’s probably one of the big reasons that GameStop is interested in selling that kind of stuff to you.

GamesBeat recently spoke with GameStop president Tony Bartel, who emphasized how his company is expanding the average revenue it generates from each customer by offering collectibles and other kinds of merchandise. Today, the world’s largest gaming-specific retailer took another step to solidify its position in that space by purchasing ThinkGeek, which is a website for pop-culture toys, gadgets, and more. GameStop has a huge market share over gamers — and it’s actually growing as we get deeper into the PlayStation 4 and Xbox One generation. By catering to the buying habits of those consumers, GameStop could significantly pad its revenue.

“You’re going to continue to see us invest in this collectibles business and licensed merchandise,” Bartel told GamesBeat. “In all 6,100 stores across the globe, we now have sections dedicated in every one of those stores [to collectibles]. Now what we’re going to do is expand some of those stores to have even bigger sections of merchandise. You’ll see that continue to expand.” 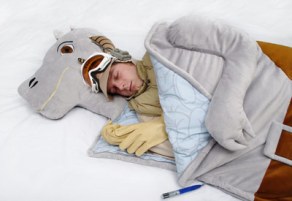 Combining ThinkGeek’s products, many of which are original and exclusive (like the Star Wars Tauntaun sleeping bag over to the right), with GameStop’s physical presence could prove lucrative.

“We expect it to be between a $150 and $200 million business this year,” Bartel told GamesBeat.

GameStop already has the right kind of customer. The crossover section in the Venn diagram between people who show up for midnight launches of games and people who want to buy toys, statues, and novelty items based on pop culture is probably pretty massive. And GameStop will only really have to compete with retailers like Hot Topic, which was actually also bidding on ThinkGeek, as well as comic-book retailers.

But GameStop has an inherent advantage over that competition.

“Right now when you look at a gamer coming in, let’s say at a midnight opening, we’re walking up and down the lines showing people a sales sheet that shows them the DLC, the season passes they can purchase with that,” said Bartel. “We have our highest market share in that. We’re showing them headsets. We’re showing them collectibles or licensed merchandise. We’re getting much more comfortable at providing all of those benefits.”

GameStop has an army of associates at its 6,100 stores. It has a consumer base that loves games and toys. And even if games continue going ever more digital — which is not actually a problem for GameStop yet — the store could just keep stocking more Star Wars action figures on its shelves.