The feature is rolling out in three U.S. cities — Chicago, San Francisco, and Seattle — and in a couple of new countries — the U.K. and the Netherlands. Budapest gets it, too. 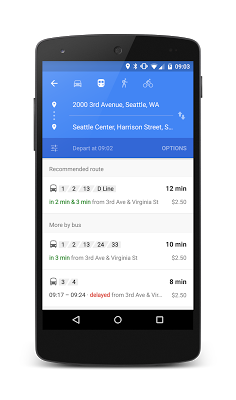 The app arranges and summarizes your transit options at the top of the screen so it’s easy to know at a glance how long you’ll be waiting. It also gives you other options in case you miss the bus or train you wanted.

Google says it’s working with more than 100 public transit agencies to provide real-time transit information. It added 25 new agencies with the addition of the new cities and countries.