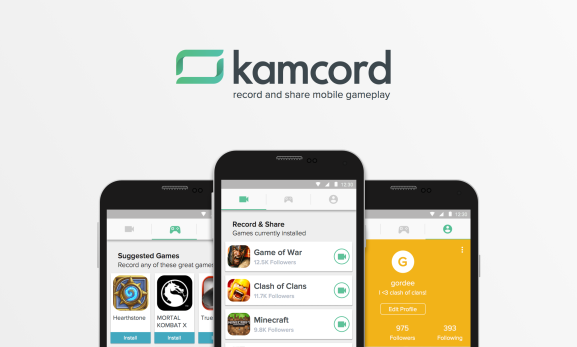 Kamcord's Android app makes it possible to record any game on your smartphone or tablet.

One of the companies trying to enable people to share their mobile-gaming videos is making some big leaps forward with its latest updates.

Kamcord has unleashed its Android app that will enable people to record footage from any game. Previously, Kamcord was working with developers to implement its tech directly into apps, but in Android 5.0 and later — which is on more than 12 percent of Android devices — Google has built in screen recording. This means people with recent Android handsets can start making videos and share them to Kamcord instantly even if the company doesn’t officially support it.

“This is a huge game changer for us,” Kamcord cofounder Adi Rathnam told GamesBeat. “Up until now, we had to get our software development kit adopted by developers, and that process took months in certain cases.”

Now, if a new game comes out tomorrow, Kamcord will support it on Android out of the box. Rathnam told GamesBeat that Kamcord is also holding out hope that Apple will offer something similar in the future.

Kamcord’s future is also about expanding how it delivers videos. At the moment, the company specializes in recorded clips that players share after they finish playing, but Rathnam says that his team is looking into livestreaming.

“I think Periscope has really shown a model for doing live video on mobile,” Rathnam said. “Things like using notifications and using social channels in a really powerful way — gaming is something that could be a huge market for mobile livestreaming.”

This is something that Kamcord wants to work toward delivering before the end of the year. It doesn’t have a ton of competition on mobile at the moment when it comes to livestreaming, but the space will probably start to fill up fast now that Android has made it so easy. Nvidia’s Shield Tablet even has a built-in Twitch-streaming client that works with any game.

But all the recorded and livestreaming videos don’t mean a whole lot without the people, and that’s something else that Kamcord is focusing on.

“I think one of the things that sorta happened on the Internet in general is that the current models favor advertisers rather than content creators,” Rathnam said. “Creators get access to massive distribution channels like YouTube, but the platforms receive the vast majority of the money.”

And that’s something that Kamcord wants to disrupt to entice some popular YouTube or Twitch creators to its platform. It’s already setting up a partners program, and it wants people who play mobile games on video to have the best experience on Kamcord.

If the company can roll out the Android app, deliver livestreaming, and invite in top YouTube stars, it could have a very potent multi-pronged plan for success.