A Los Angeles-based startup, which specializes in matching handpicked influencers with a handful of brands, has landed its first $1.5 million through a matchmaking funding site.

The Influential Network is a mobile-first marketplace that non-exclusively handles about a thousand online celebrities who have a lot of followers on Twitter, Instagram, Vine, or Snapchat. About 25 brands or their agencies are currently signed up on the marketplace.

The funding came after Influential posted its request on FlashFunders, an online funding platform that matches investors with companies. The seed round was led by Europlay Capital Advisors, which had also been a seed investor in Skype.

Here’s how Influential works. Say a TV network wants to spread the word about a scary new TV show. It might provide the messaging, image themes, legal requirements, and other parameters as an offer to influencers selected by the platform — usually 20 to a hundred — because their followers are in the target audience. 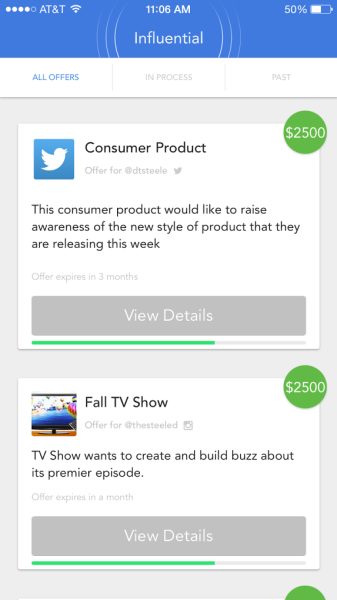 Above: A couple of brand offers via Influential.

The offer — say, $2,500 — is payable for an acceptable short video, text, tweet, photo, or other communication that meets the brand’s requirements, which might be, in this case, a short video of your scariest scream along with the show’s particulars. The brand can ask for changes or reject the submission, but CEO and cofounder Ryan Detert told me most of the selected influencers get the gig.

He came to this line of work as an influencer himself, with tons of followers and ownership of such Twitter handles as @travel, @fashionandstyle, and @automotive.

“I was [physically] going to agencies and getting budgets,” Detert told me, when he and cofounder/COO Dan Steele decided to create a selective marketplace to put brands directly in touch with influencers.

The company describes its platform as “100 percent brand-safe,” because the brand directly conveys its wishes and directly receives the submissions. Final submissions to the supported social networks are made through Influential’s APIs.

Some influencer platforms, such as Themidgame, involve themselves more actively, as an agency would, which can help or complicate the communications. Others, like NeoReach, differ in their use of a cost-per-click model for paying influencers.

Detert pointed to Niche, now owned by Twitter, as its biggest competitor. But, he said, they also act somewhat like an agency, using email and phone to negotiate the final arrangement and deliverables.

Another differentiator, the company said, is that brands working with Influential are required to spend at least $50,000 on influencers.

“The only reason to spend money [for social influencers is for] earned media,” Detert said.

“If you don’t have enough paid media [by hiring influencers], you don’t get enough earned.”

The new funding will be used for further platform development and for sales efforts. Other institutional investors in this round, which represents all the funding raised thus far, were Raven Capital, Ace Fund, and Paradigm Talent Agency.