In the current state of the console wars, there is a key component outside of Nintendo, Sony, and Microsoft that I am dying to see get introduced to living room gaming. If done right, it has the potential of becoming a very disruptive force in the market’s digital distribution front: The Steam Machine.

Bringing Valve’s digital marketplace to the couch, through a simple consumer friendly product, would be huge. The problem is, Valve still hasn’t delivered on a promised standardized “console” of its own (and I’m beginning to think that they don’t want to). This leaves those of us that see the potential of Steam access in the living room having to create our own console-like PC gaming rigs.

The thing is, there aren’t very many options that avoid looking — and sounding — like a PC tower. Controls can also be an issue. Even though I feel there are a ton of great console controller friendly computer games on Steam, there’s always that PC enthusiast that is going to bemoan that you should only play these games with a mouse and a keyboard (and in some games, that’s totally valid).

Corsair, a manufacturer of high-end PC gaming hardware products, is trying to tackle both of these issues. Although it isn’t offering up a full-fledged Steam Machine, the computer manufacturer did show me a couple of products that are looking to overcome some of the current shortcomings of building a living room PC box.

Above: Beware of dog

The most obvious thing that popped out when I entered the Corsair meeting was the Bulldog: a squat chunk of red-and-black metal whose face has been cut in sharp angles, sitting atop four short legs. This is Corsair’s living room-friendly PC gaming case.

Part of the reason I couldn’t help noticing the thing is because it’s big.

If pressed for a comparison, I’d say the BullDog’s size is roughly similar to the original Xbox. Here’s the thing about size: Part of the challenge of designing something to contain high-end PC hardware is space. The latest and greatest in computer gaming hardware does not necessarily come in compact packages. It’s likely the reason why the original Xbox home console was so monstrous.

Corsair isn’t wasting the space inside of the Bulldog. From inspecting the case’s innards, it appears Corsair has pushed the design to be as compact as possible while maximizing the three most important aspect of high-end PC hardware: cooling, silence, and compatibility.

Corsair’s solutions to the temperature issue are two separate liquid cooling systems, one for the video card’s GPU and the other for the motherboard’s CPU. The GPU cooling system will require ordering a special bracket, since not all video cards are built the same. The only fans in the BullDog are tied to the radiator and the case for blowing general area heat out of the back of the machine. The Corsair representatives boasted that their GPU liquid cooling system could get the chip running 19-30 degrees cooler than the stock video card fans.

That’s not bad, but two concerns nag me. One is how the system sheds heat. Traditional consoles have a horrible track record when it comes to staying cool, especially since people tend to stick them in the poorly ventilated cubby holes that Ikea calls entertainment centers. The other is sound. Even with liquid cooling, I’ve heard some PC builds that sound like lawn mowers. Maybe the roar of plastic fans spinning up in unison isn’t a big deal when you’re alone with headphones on, but it’s ganky as hell in a couch-gaming situation.

To test both of these issues, we ran Grand Theft Auto V’s benchmark test with all of the video options set to their highest settings (running on an overclocked GeForce TitanX video card). I had the audio muted and let the benchmark run for a few minutes. The frames per second were sticking to a playable rate (high 40s into the 50s), but the fans never revved up to compensate for the increased heat generated from the test. The temperature of the air being pushed out of the back didn’t seem terribly warm either. Above: The interior of the BullDog with all components installed.

It seems like as long as the Bulldog is placed somewhere where it is allowed some reasonable ventilation out the back and sides, it should be able to run the hardware cool and silent during high-performance stress. Whether this holds after long-term use, we’ll have to see.

Corsair is looking to package the Bulldog case as a sort of a DIY Steam Machine foundation product, in the fourth quarter of 2015. For $400 Corsair is offering the case, the dual liquid cooling system, a modular SF600 power supply, and a mini-ITX motherboard. Builders will then have to figure out their video card, memory, and hard drive solutions. The included mini-ITX motherboard doesn’t have to be used, either. The case is designed to take any mini-ITX compatible product.

All of this means the final tab on the build isn’t going to be cheap, which unfortunately is one of the major issues keeping the concept of Steam Machine-like products from denting the console space.

One other challenge, when designing a living room gaming PC, that Corsair is trying to solve is controls.

Putting a mouse on my lap

I used to play a lot of hardcore, competitive-level Quake back in the day. At one time, suggesting that I use a console controller for a first-person shooter was ridiculous. You may as well have told me to use a steering wheel and pedals to rocket-jump around the arena.

Even though my acceptance of console controllers for certain games is now much more, well, open-minded, I sympathize that some people must have keyboard and mouse functionality for their games. Even when they are sitting on a couch.

Corsair’s solution to this is the LapDog. It’s a specialized surface designed to sit on the user’s lap and act as a sort of miniature desk. The platform features a rectangular slot where a Corsair multicolor keyboard conveniently falls right in, with some open space to the right for the mouse (which is tethered to a plastic stem so it won’t slip and fall off). Several USB ports are available where you could, ironically, plug in a console controller as well.

When the Corsair rep approached me with the unit, I expected something awkward that I’d have to balance while coordinating my mouse movement. Sort of like juggling a hot plate from the microwave on your thighs while watching TV. The LapDog wound up sitting on my lap naturally, and there was no need to adjust my legs to perform any sort of balancing acts. It was also deceptively light.

The mouse area looks a little tight, and some players may need to adjust their physical play habits and tweak in-game mouse sensitivity. I threw the mouse around like crazy trying to replicate what a twitchy first-person shooter would feel like, and I rarely ever wound up throwing the mouse off the board or snagging it on the tether. 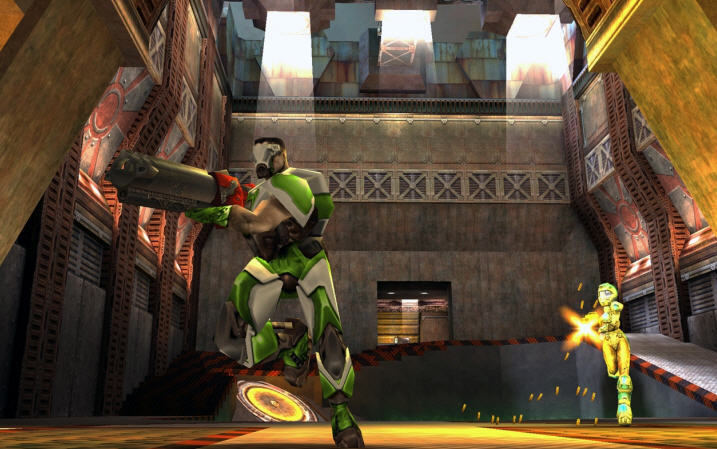 Above: Play Quake with controllers? PFFFFT!

The only issue I bumped into is more of a personal preference thing. I’m a large man with big hands, and I am use to playing quick mouse and keyboard shooters with my arm/wrist resting on the desk, while occasionally lifting my arm up for dramatic 360 turns. My huge right hand was having trouble finding someplace to plant itself on the board.

I am fairly sure that someone with average-sized hands will not have the same problem, but we’ll have to see. Corsair admitted that it’s still tinkering with the design and layout of this product.

Look for the LapDog release around the same time as the BullDog. It will cost about $90 as a standalone product or $200 with the Corsair RGB keyboard.

Is this a good base to build off of?

It’s a little too early for hard criticism of this product one way or the other. Corsair still has at least six months to refine things on both the BullDog and LapDog. From my experience during the demonstration, I see two products that have been designed to address a lot of the visual and functional problems of couch PC-gaming. I think problem when it comes to Steam Machine-like set ups, however, is price. If you price out a high-end PC machine using Corsair’s products as a foundation for the build, the bottom line winds up well over the $1,000 mark. The economics of the situation isn’t necessarily Corsair’s problem to solve, but the thought nagging the back of my mind is that the market as a whole needs to address affordability. I strongly feel it’s what’s going to tip the idea of Steam Machines from a cool niche idea to a widely adopted product. Above: BullDog CPU Liquid Cooler down