Disney Infinity has new competition in the toys-to-life genre. And the game is from … Infinity’s own parent company?

I kept getting a sense of déjà vu when I attended the announcement event for Disney’s and Hasbro’s Playmation, a line of interactive toys aimed at kids and families. It’s sort of related to toys-to-life games like Disney Infinity and Skylanders, where you can buy toys that add more characters and levels to a game. The biggest difference with Playmation is that while it incorporates traditional role-playing game mechanics, it doesn’t have a video game attached to it. Instead, it uses old-school audio narration and sound effects to tell a story while kids pretend to blast their imaginary enemies.

Playmation also forces children to move around thanks to the accelerometer inside of the wearable gear. Disney chief operating officer Tom Staggs described it as “physical play for the digital generation.”

The first Disney brand to embrace Playmation tech is Marvel’s Avengers (Star Wars sets will follow in 2016, with Frozen toys releasing in 2017). The Avengers toys can interact with each other and respond to the player’s movements through wireless bases called power activators. These activators are a lot like the “portals” from the toys-to-life games. When you place the $15 action figures (Disney calls them “smart figures”) on the bases, they become characters in the story, with each having their own dialogue and attacks. J.A.R.V.I.S., Iron Man’s helpful computer assistant, handles narration duties as players fight against Ultron and his army of supervillains.

The Avengers starter pack will hit stores in October and include a wearable version of Iron Man’s repulsor with 25 missions, two power activators, and Captain America and Iron Skull figurines — the whole shebang will cost $120. If your kid hates Iron Man, the next edition comes one month later and features the Hulk’s humongous green fists.

At the preview event, I had a chance to see how the Playmation system works. Surprisingly, it was a lot of fun, even for a big kid like me. 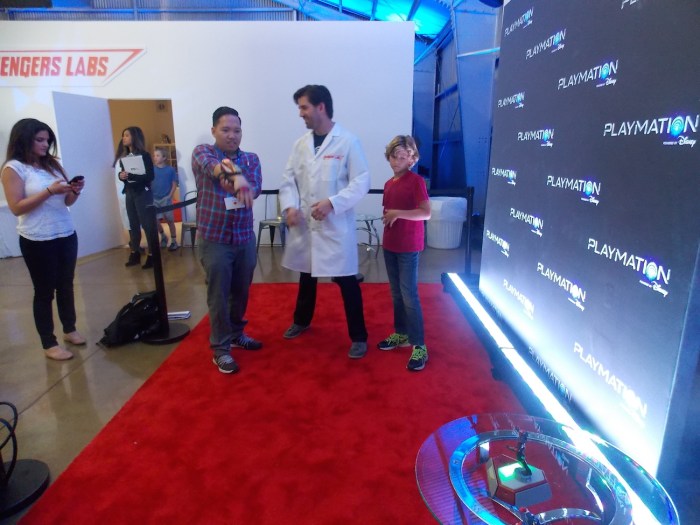 Above: The repulsor fits all sizes, so adults can play with their kids, too.

In a space carefully designed to look like the bedroom of the world’s biggest Marvel fan, a group of journalists met 10-year-old Hunter. A Disney employee gave him the repulsor gear and let him loose with one of the stories from the starter set. Avengers teammate Falcon recruited Hunter for a rescue mission in the fictional country of Wakanda. The room became Hunter’s playground as he shot at the power activators (they also serve as stand-ins for different enemies), ran around in circles, hid behind bean bags to dodge enemy fire, and jumped whenever the story called for it.

The demo made me realize that my old bones are probably not cut out for this type of strenuous activity. But I’m sure 10-year-old me would’ve loved it.

At the end of the mission, J.A.R.V.I.S. gave Hunter an evaluation, telling him how many experience points he earned. It was enough to level up and unlock the freeze beam ability, which replaced his normal long-range attack (using the big button on top of the repulsor). The other two modes of fire include the trigger near your thumb and Iron Man’s signature palm cannon (lift your palm up and hold the bottom of the gauntlet with your other hand). Players can unlock 40 more abilities over time from playing with the different smart toys. The Armory feature on the repulsor allows them to decide which three powers to bring into battle, customizing their loadouts as if it was a multiplayer match in Call of Duty.

Visually, the repulsor looks like it belongs to a cheap Iron Man costume. It’s a hunk of plastic with a bunch of fancy electronics inside. I wasn’t too impressed until I tried it on later that day. The movie-authentic sound effects from firing the lasers and the vibrating feedback from getting hit really sells the superhero fantasy. And it’s hard not to smile when you defeat one of the supervillain smart toys: The power activator ejects them from the base with a satisfying pop.

You can’t actually “die” in Playmation. Disney wants kids to keep playing without worrying about something like respawn timers. If you’re taking too much damage, J.A.R.V.I.S. will pull you out of danger. But afterward, you can immediately jump back into the unfinished battle. Or, if you’re aware that you’re about to lose, you can shake your arm to recharge and revive yourself on the spot. A second player can also join in to help if they have their own Avengers gear. 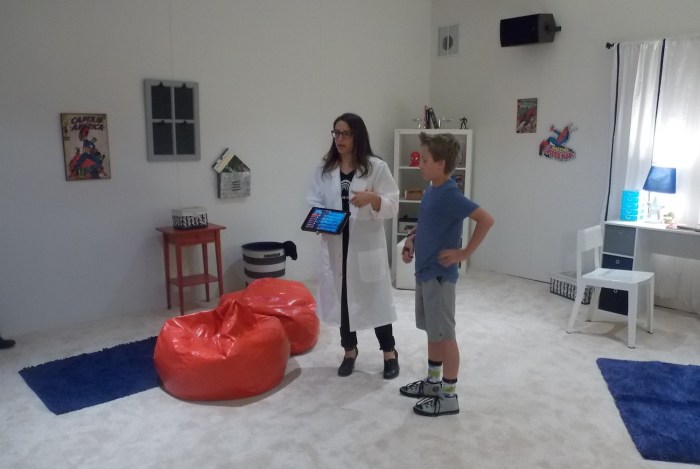 Above: A Disney employee walks us through the companion app after Hunter’s mission.

Though Playmation’s ecosystem of Bluetooth-powered devices means you don’t need to connect to the Internet, the Avengers set has a companion app that helps visualize the child’s achievements. Once they register and sync the repulsor with the free AvengersNet app for phones and tablets, they can see their progress and keep track of their growing list of powers. It also allows them to explore the in-game universe by seeing the different battlefields they’re fighting on and meeting other Marvel characters. New missions are available for purchase through the app.

While Disney couldn’t comment on Marvel playsets beyond the Hulk hands, it’s only a matter of time before they package other famous Avengers weapons like Captain America’s shield or Thor’s hammer in future kits. One day, players might be able to assemble the entire Avengers team with their friends. With that many kids jumping and running in the same area, you’d probably want them to play outside just to be safe.

But as it is, Playmation is a cool if pricey way of combining wireless tech, physical activity, and toys. Instead of wowing kids with shiny graphics, it provides just enough tools to let their imaginations run wild. And as we all know, no matter how powerful a console or PC is, they can never match the kind of crazy fantasies our minds can come up with.

For a closer look at the toys, see the gallery below. 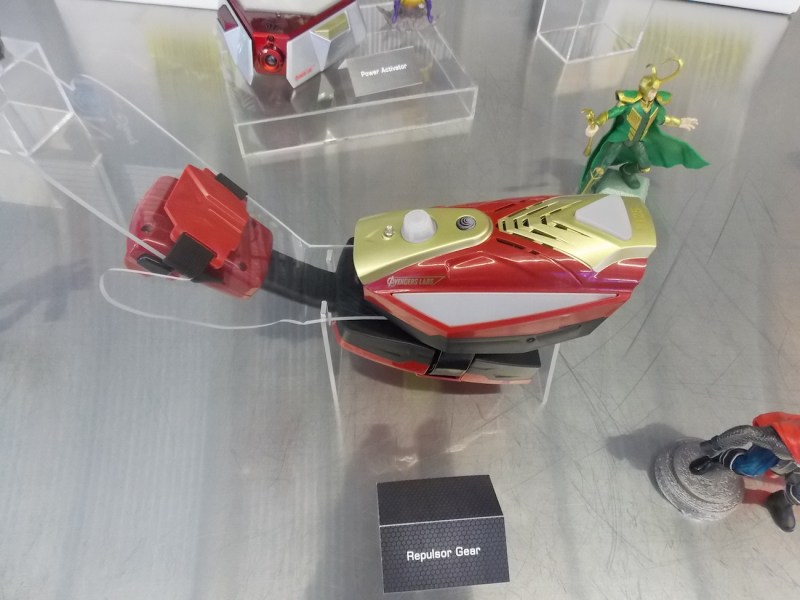 Above: The Iron Man repulsor has multiple ways to attack.