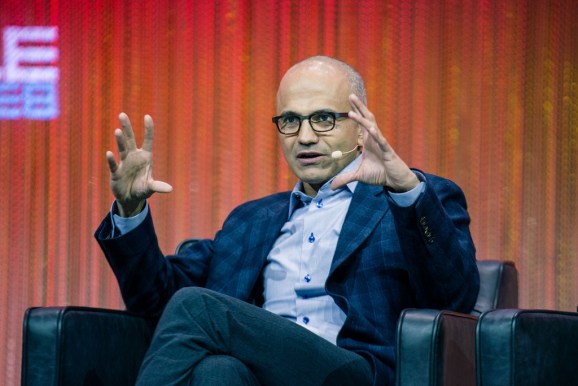 Following the events of the past few weeks, it’s clear that Microsoft and CEO Satya Nadella are on the acquisition path. We speculated back in April that Salesforce was an acquisition target for the company and that turned out to be true, even if the $70 billion price tag reportedly demanded by Salesforce’s Marc Benioff was too steep for Microsoft’s liking. Since then, Microsoft has announced the acquisition of 6Wunderkinder, creator of the Wunderlist task management app, and has built on the momentum from its recent acquisitions of Acompli and Sunrise. So what do these purchases tell us about Microsoft’s overall acquisition strategy and who might be next on Satya Nadella’s shopping list?

If we look at Accompli and Sunrise, previous acquisitions like Skype, and Microsoft’s attempted purchase of Salesforce, we can see a pattern in the company’s acquisition behavior that may allow us to predict its future actions. First, Microsoft is acquiring startups with really slick software that people love to use. The Verge called Sunrise the best calendar app, Business Insider called Accompli (which became the Outlook iPhone app) the best email app, and both had rapidly growing bases of loyal followers. Specifically, Microsoft is snapping up companies that do something Microsoft already does itself but is struggling at, or that the other company just does much better than Microsoft does.

Microsoft Outlook’s calendar, tasks, and iPhone app aren’t doing so well? Queue Sunrise, Wunderlist, and Accompli. These smaller apps are subsumed into Microsoft and their talent and innovation are applied to its existing applications. But the Redmond-based giant is also in the business of buying and integrating brands. It would have been foolish to rebrand Skype under the Lync banner in the same way that it’s highly doubtful if Salesforce.com would have been re-skinned as Dynamics CRM. Skype and Salesforce had become synonymous with consumer video conferencing and business CRM respectively, while Microsoft’s own offerings underperformed, so the decision was taken to acquire rather than build. Finally, and perhaps most importantly, Microsoft is acquiring companies that are aligned with its goal of becoming a mobile first, cloud first organization, that help it to enhance its Office productivity and collaboration offering, and that boost its image as a company that prioritizes user experience and design. So who’s next on Nadella’s shopping list?

When it comes to messaging and team communications, nothing is hotter in the SaaS space right now than Slack. Not unlike Acompli, Sunrise, and Wunderlist, it is gaining a loyal following of users (SaaScribe included) who love its user experience and the ease with which it facilitates collaboration. It could bring a lot of features, functionality, and innovative design to Microsoft’s Office 365 collaboration suite as well as Slack’s vibrant personality – and we would all agree that Microsoft could also really do with an injection of personality!

In March, Slack launched its native Windows application, which would surely be a must for Microsoft if it really is mulling over an acquisition. In keeping with our aforementioned criteria, Slack is certainly doing some things that Microsoft already does but in a much more user-friendly and highly mobile-focused way – however, could it justify the $2.8 billion+ price tag? And would it make a good fit? As a user, I would say that Slack looks and feels more like a Google App than Office 365, but there has definitely been some convergence in the feature sets of the main productivity platforms, and a Slack acquisition could be another step along that road for Microsoft.

Another rising star in the SaaS world that could be an excellent fit for Microsoft is the electronic signature specialist Docusign. In his opening keynote at Docusign Momentum 2015 in London earlier this week, CEO Keith Krach announced that Microsoft had participated in Docusign’s latest round of funding, which saw it raise $233 million and double its valuation to $3 billion. So, apart from the obvious 50 million users across 100,000 companies, what could a Docusign acquisition bring to Microsoft? Well, first it’s worthy of note that Microsoft is not only an investor in Docusign but a long-term strategic partner. Docusign boasts pre-built integrations across a range of Microsoft applications and “robust apps for Outlook, Word, SharePoint, Dynamics CRM, Windows 8 and Windows Phone.” Document management is core to Microsoft and Docusign alike, and it’s not just the ability to record signatures but the encryption, permissions, and compliance issues related to business documents where Docusign could bring some specialist knowledge and technology to Microsoft’s offering. From the point of view of shared objectives, the two couldn’t be more aligned in terms of enabling workforce mobility and productivity from any device. Therefore, I would see this as a good strategic fit for Microsoft and another likely target for Nadella.

Much has been written about this one, but does the recent Salesforce bid tell us anything about the likelihood about a play for Dropbox? The two have a whole list of similarities from a Microsoft perspective. Dropbox is to storage what Salesforce is to CRM. Both Dropbox and Salesforce have pursued a path of tight integration of their platforms with Microsoft – Dropbox, in particular, has gone to great lengths to ensure that its platform integrates seamlessly with Office, owing to the large amount of its customers’ storage that is accounted for by Office files. By that same token, Dropbox and Salesforce both share a huge number of customers with Microsoft and those same shared goals again of enabling productivity in the cloud and on mobile. It is also safe to say that Dropbox and Salesforce have outperformed OneDrive and Dynamics quite significantly and have become the de facto standards in their fields, with huge user numbers – Dropbox currently has 300 million+ users and 88,000 paying companies on its books. So, with so much in common, the question becomes why wouldn’t Microsoft make a bid for Dropbox just like it did for Salesforce?

Well, it may be that Microsoft has more confidence in the potential of OneDrive than it has in Dynamics. It might also be true that the storage market is more commoditized than CRM, and while Salesforce has a differentiated offering that would be very difficult to replicate in Dynamics, it might be more feasible that OneDrive can catch up with Dropbox from a user experience perspective. However, the most likely reason for Microsoft to shy away from Dropbox will be the same reason the Salesforce bid failed – Dropbox is currently valued at around $10 billion, which is roughly 25x its ARR. Is it worth that much plus a premium to Microsoft? I’m not so sure, but stranger things have happened, and Nadella has a lot of cash burning a hole in his pocket.

Michael Cullen is cofounder of SaaScribe, an online publication with an editorial focus on the SaaS industry. You can follow him on Twitter @michaelcullen87.