Players are starting to give up on DayZ, the multiplayer zombie survival sim that’s been in Early Access since Dec. 2013.

DayZ has sold over 3 million copies via Steam’s Early Access sales portal — despite the fact it’s still in an alpha testing state — but less than 9,000 players are now logging in at peak times. Just three months ago, that figure was closer to 30,000, and at its most popular DayZ had over 45,000 players concurrently logged in.

It seems that DayZ is no longer doing enough to keep its large playerbase actively engaged. It’s a serious problem for Early Access projects which have such a long development cycle. DayZ has no final release date yet, and it’s expected to enter a beta testing phase in Q4 this year. Keeping players engaged over such a long period is tough unless you’re regularly adding new content. 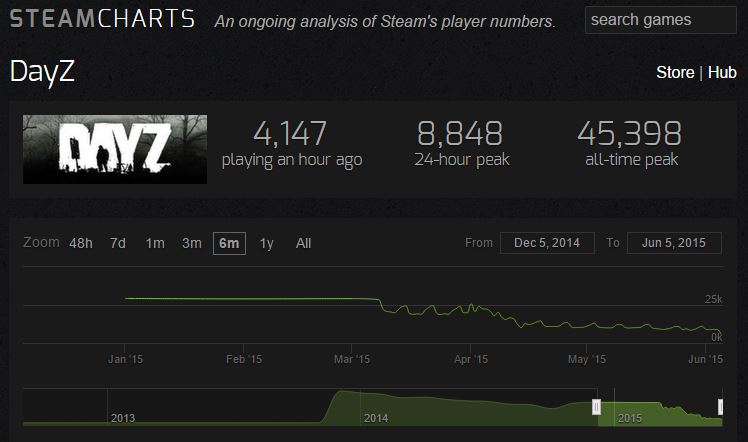 Reddit users have been giving their thoughts on the declining numbers, with Dafootballer saying, “The project management on DayZ is just awful. Nothing gets done on time, everything just doesn’t work on release, or it breaks more things. This game is nowhere close to beta. Unfortunately this is going to be the poster child for why you don’t listen to your community when it comes [to] releasing things too early!”

Reddit user Ficcara1002 pointed to existing players getting tired of DayZ as the major problem. It raises an interesting question of whether everyone who wants to pay for and play the game has already done so. “Everyone who wanted this dream has already played 300+ hours of DayZ and is tired of it,” they said. “Early Access was a mistake for the game.” 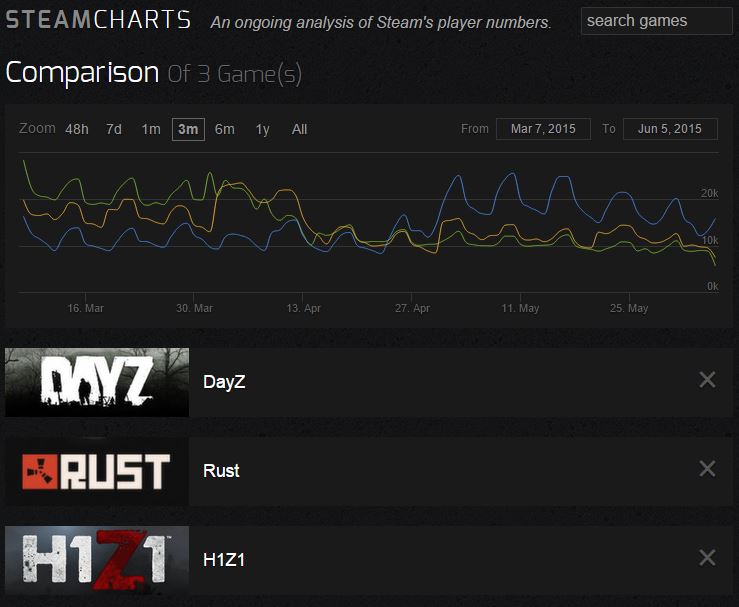 Of course, DayZ was an early example of what’s become a hugely popular survival genre, particularly among PC gamers. Titles like Rust and The Forest — both also in Early Access — offer players a different take on surviving, and they’re likely taking attention away from DayZ. Rust is performing particularly well in terms of player numbers, coming from a peak of under 9,000 back in March to outperform DayZ massively in last two months, with a peak of nearly 26,000 during May.

H1Z1, the multiplayer zombie game from Daybreak Game Company (formerly Sony Online Entertainment), is also taking a share of survival fans during its Early Access release. While it lagged behind DayZ in player numbers back in March, H1Z1’s proved more popular in the last month or so.