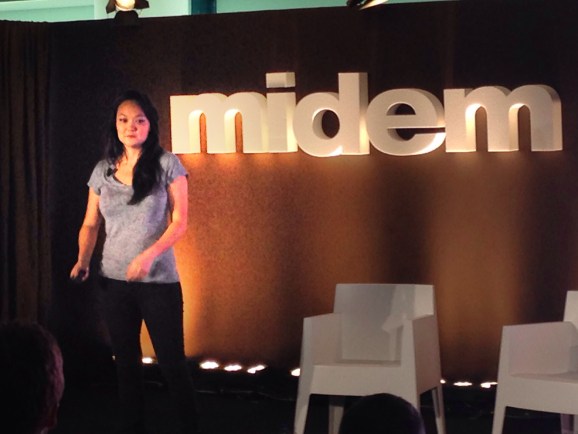 Midem paid for part of Chris O’Brien’s travel to Cannes for the Midem Music Industry Festival where he is participating as a startup competition judge. Our coverage remains objective.

But in short, it’s been labeled as elitist, arrogant, and a blatant power grab by the dozen or so artists who were among the founding members. In other words, the message about empowering artists got lost in the shuffle.

So, as part of an ongoing effort to reboot Tidal’s image, Vania Schlogel, Tidal’s chief investment officer, appeared today at the Midem music and technology conference in Cannes to explain the company’s vision and defend it from the vitriol that’s been hurled at it since day one.

“There’s been a lot of misinformation and misperception out there,” she said. “We’ll continue to address that by continuing what we’re doing in terms of putting our heads down and creating a better service for consumers.”

With the music streaming market attracting fierce competition, and with Apple expected to kick that up another notch on Monday with the launch of its new music streaming service, Tidal had its work cut out for it in the best of circumstances.

But right out of the gate, the company was accused of trying to be a service that focused on successful musicians like Coldplay that were founding members. Schlogel said that accusation hurt, because the company was already at work on services like Tidal Discovery and Tidal Rising to help independent artists as well.

In general, she said the mission of Tidal is create more of a direct connection between recording artists of all kinds and fans. The company aims to do that through exclusive content like concert footage and behind-the-scenes videos.

By re-establishing that link, Tidal hopes to persuade more people that music is worth paying for, she said.

More recently, the company has released desktop apps for Mac and Windows, and has added a ticket-buying feature. In addition, there’s a new $4.99 per month plan for college students.

Schlogel brings an impressive resume to her new gig. Before Tidal, Schlogel was an investment banker at Goldman Sachs.

The company also continues to build out its music catalog, and is now available in 44 countries. But while Tidal has deals with Warner Brothers and Universal, it has lacked a similar deal with Sony. Schlogel said she expected to finalize a deal with Sony soon.

In fact, Doug Morris, chief executive of Sony Music Entertainment, is speaking tomorrow at Midem. Schlogel on stage offered half-jokingly to wrap things up this weekend.