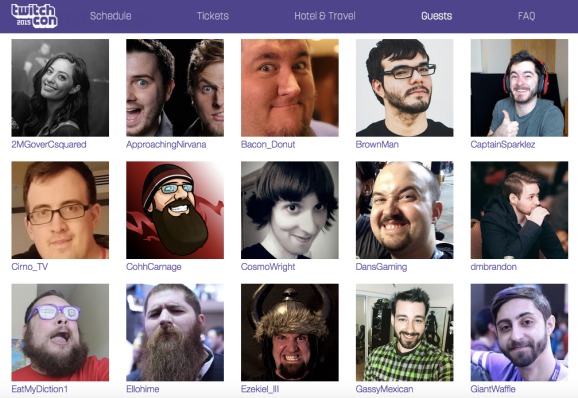 Just some of the Twitch stars that are attending the convention.

Watching live gameplay is one of the top ways that fans interact with their favorite games and with one another, and that interaction will take on some real-world implication when Twitch throws its first convention later this year.

TwitchCon 2015 is coming Sept. 25 and Sept. 26, and the video company is planning to invite a huge number of streamers to fill out its schedule of events. Over the two days, fans can check into 40 different panels like “Building Communities on Twitch” and “Can We Just Play? The Legality of Let’s Play Video and Streams.” You can find out more about the panels — and plan out your weekend — by checking out the official TwitchCon webpage. All of this comes as Twitch nears the end of its first year under the ownership of Amazon and as it has strengthened its dominance over gaming-related video on the Internet.

In addition to panels, Twitch will have official events where fans can meet up with streaming personalities. And the company is also planning a TwitchCon after party that will feature the music of infamous EDM legend Darude, who is best known for “Sandstorm.”

Obviously, the event is geared heavily toward people who enjoy broadcasting and watching gaming content online, and that has attracted some of the top names from the Twitch community.

Here is the full list that Twitch has confirmed will show up at the convention: