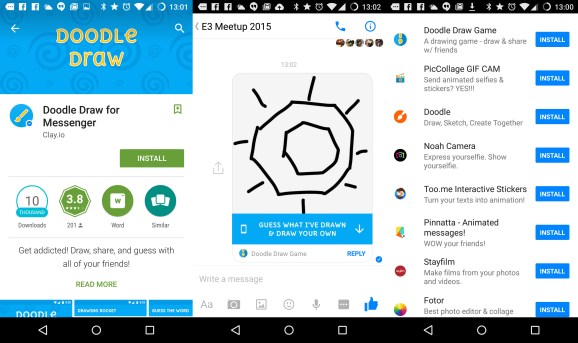 The Doodle Draw Game for Facebook Messenger -- I was trying to draw an octagon.

One of the best ways for a mobile game to succeed in Asia is to get a distribution deal with the top messaging apps. Now, Facebook is getting into that business with its Messenger app.

Doodle Draw Game is the first game that Facebook is distributing through its chat app (as TechCrunch first spotted). Now, when you click the “Get Apps for Messenger” tab, you see a list of tools alongside this Pictionary-style game. Clicking through on Doodle Draw Game takes you to the Google Play store on Android, where you can install it for free. This is a natural evolution for Facebook and the Messenger app, as the company is already generating significant revenue from distributing games and apps through its mobile app. Competing chat clients like Line and Kakao make serious cash by suggesting games to their users, and this could turn into another way that Facebook gets a piece of the $30 billion mobile-gaming industry.

While this is the first game you can get through Facebook Messenger, the app has always offered downloads. Clay.io, the developer responsible for Doodle Draw Game, has previously released a meme-sharing app as part of Messenger. And while Facebook has previously said that it thinks that these kinds of non-gaming tools work best with its chat app, a platform like this is a great way to reach people who spend a lot of time talking with friends. Now that Facebook has opened up the Messenger platform to all third-party developers, the second and third games are probably coming soon.

This is something that Facebook is likely OK with. It has to see how chat platforms like Line, which is incredibly popular in Japan, uses games to keep people deeply engaged and coming back for more. Line has more than 700 million users worldwide that use it to send text messages and make voice calls, but it truly shines as a game-distribution platform.

Line is one of the most important mobile publishers in Japan and other Asian territories. Developers want to put their games out through Line despite the company taking a 30 percent cut of the revenue on top of whatever developers give up to Apple or Google. This has made Line the fourth highest-grossing app overall on iPhone in Japan (and it’s No. 1 in places like Taiwan and Thailand).

Kakao has a similar stranglehold on the game-distribution market in South Korea, and Tencent’s QQ is the dominant platform in China.

But while chat apps are huge in terms of gaming in Asia, the same thing hasn’t quite happened in the United States. Even as communication platforms like Whatsapp and Snapchat have exploded in popularity, they haven’t tried to corner game distribution in the same way. Instead of chat, it’s the personalization app Zedge that has found a way to offer up games — alongside ringtones and wallpapers — as a means of generating extra revenue in the States.

But Facebook, with its extensive reach and history with games and developers, could make a move into this part of the market that could give it Line-like dominance in the one market that spends as much on mobile games as Japan.